His Church. Our Experience.
Subscribe
HomeLocalLate Deacon Mooneyham was a 'humble intercessor'
LocalObituaries 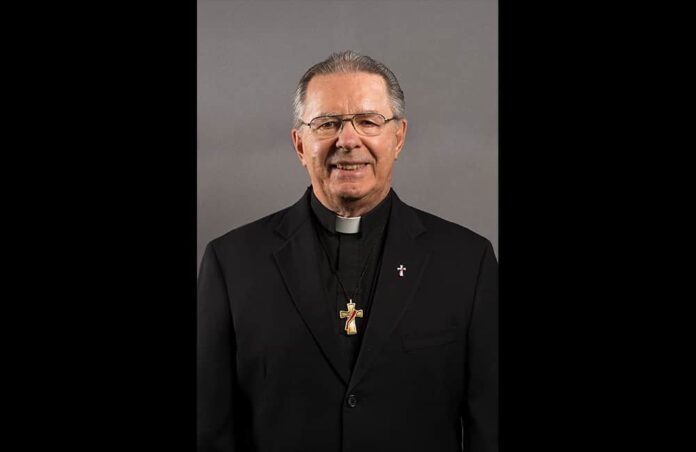 Everett Gene Mooneyham was born on Aug. 1, 1936 to Fred and Ruth Mooneyham in Atlanta, Ga. Leaving Georgia at a young age, he grew up in Hyattville, Md, and attended public schools. After attending college in Maryland, he joined the United States Air Force in 1959 and served for four years as an electronics technician.

While in the Air Force, he met and fell in love with Doris Jean Nible. On July 30, 1961, Gene and Doris were married at St. Francis Xavier Cathedral in Alexandria, La. He was baptized in the Catholic Church shortly after his marriage on Jan. 8, 1962. The couple is blessed with five children; along with eight grandchildren and three great-grandchildren.

Gene went on to work in various locations as a systems analyst with computers and eventually came to Lakewood, where he attended St. Jude’s Catholic Church. While at St. Jude’s, he became interested in the diaconate and attended formation. Then on March 22, 1975, Deacon Gene was ordained at the Cathedral Basilica of the Immaculate Conception by Archbishop James Casey. He was in the second class of men ordained into a permanent diaconal status. Archbishop Casey assigned him to St. Jude’s in Lakewood.

In December of 1977, Deacon Gene was transferred by his company to St. Paul, Minn. He ministered there until January of 1986. Then, he and his family relocated from Minnesota back to Littleton. At that time, he was assigned to the newly established Light of the World Catholic Church and remained there until his retirement in 2011.

Deacon Gene was very involved with Marriage Preparation and Religious Education. He was also involved in the Charismatic Renewal efforts throughout his ministry.

“Deacon Gene provided spiritual strength to the diaconate and his communities.” said Deacon Joseph Donohoe, Director of Deacon Personnel, “His quiet and confident presence allowed him to be a good and humble intercessor for his brother deacons. We will certainly miss him; but, are confident he is praying for us, even now.”