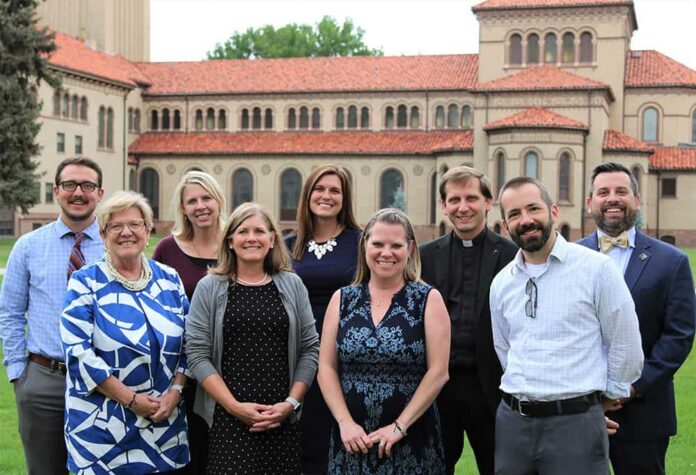 There’s never been a more exciting time than now to be a student at one of Denver’s Catholic schools.

With robust curriculums that form the whole person and a variety of educational models to choose from, Catholic schools are a great option for parents seeking more for their children’s education.

Even more exciting are the various education professionals who are stepping into leadership roles beginning this new school year. These are individuals are who are passionate about Catholic education and even more passionate about partnering with parents, the primary educators of their children, to help lead their kids to an encounter with Jesus Christ.

The ten new leaders featured below bring a wealth of experience to their new roles, and they are each excited to rise to the challenge of making Denver’s Catholic schools the absolute best they can be at helping to form students into authentic disciples of Jesus Christ. Andrew Beach credits much of his call to the teaching vocation to his parents, who are both teachers themselves. Beach studied economics and philosophy at University of Colorado Boulder and then went on to pursue a master’s degree in theology from the Augustine Institute. “From the second I heard about Lourdes and all that us going on here in terms of its classical education and strong Catholic identity and culture, I knew it was the school where I wanted to teach,” Beach said. As a result of the school’s expansion, Beach is now the Head of School for Lourdes’ South Campus. In his new role, he hopes to assist in guiding Lourdes toward academic excellence, but more importantly, he hopes to foster an authentic and strong Catholic identity within the schools. For Kellie Carroll, being at Bishop Machebeuf High School is a bit of a homecoming for her. She’s been in education for 20 years, starting at St. Pius X in Aurora and then moving on to teach for several public schools before finding her way back to the Archdiocese of Denver. However, she was also educated in Catholic schools growing up and graduated from Mullen High School. “This is a system that certainly raised me and had a profoundly positive impact on both my academic and faith formation,” Carroll said. As the interim principal at Bishop Machebeuf High School, Carroll hopes to help prepare students for life outside of the school walls. “I firmly believe a solid formation in the faith and a rigorous academic setting will prepare them for the adventure and challenges life will bring,” she said. Gretchen DeWolfe has taught 5th grade at St. Thomas More Catholic School for the last five years and will now be entering her sixth year as the school’s new principal. “In my new role as principal, it is my duty to support parents, the primary educators, in forming their children through encounters with Christ, which will in turn deepen that beautiful and essential relationship,” DeWolfe said. Being in Catholic education is more than simply a job for DeWolfe — it is a calling. “My heart has always been in Catholic schools … It is an amazing gift to be able to teach and live the Catholic faith on a daily basis,” she said. “[This] is what I have chosen to dedicate my life to — teaching and living the truths that Jesus taught us.” Dana Ellis worked in Jefferson County Public Schools for over 30 years, 18 of which were as a principal, and then went on to work in Boulder Valley Public Schools for several more years until she retired. After “walking around in the desert” for a couple of years, Ellis now finds herself as the new principal of St. Louis Catholic School in Louisville. As she embarks on this new foray into Catholic education, Ellis is confident that God will continue to lead St. Louis down the path it needs to go in order to continue forming authentic disciples of Jesus Christ. “I do know that God will lead the way, but I don’t know what that way is going to be yet,” Ellis said. Before starting his career in Catholic education, Eric Hoffer had plans to complete a degree in political science and attend law school. “However, God had other plans in place for me,” Hoffer said. He converted to Catholicism while in college, and after graduation, volunteered with the Brothers of the Sacred Heart, where he “fell in love with education and my faith.” He’s had a 16-year career in various roles in education thus far, and recently completed his graduate degree in Educational Leadership at the University of Notre Dame. He feels fortunate to lead Christ the King Catholic School as principal. “If I am able to help each of our students understand that they are beloved children of God and that he has a beautiful plan for their lives, then I will have made a valuable contribution to our archdiocese,” Hoffer said. Steve Vaughn began his career as a teacher teaching 4th, 5th and 6th grade at a few different Catholic schools in Wisconsin and Nebraska. Over the last 10 years, he’s been a teacher and assistant principal at a Denver charter school, but he’s now answering a call from the Lord to return to Catholic education. “Having worked in both Catholic and public schools, I can say that Catholic schools truly provide an education for the whole child,” Vaughn said. Speaking for his new role as principal at St. Therese, Vaughn shared, “Our goal at St. Therese is to create saints! It’s an honor and blessing to be tasked with fulfilling this mission at my school. This is exciting, challenging work, but there’s no other work I’d rather be doing.” Tamara Whitehouse has worked in both public and Catholic schools for over 20 years. More recently, she has also served as an instructor for the Denver Catholic Biblical School. Her transition from public schools to Catholic schools came after taking time to stay at home with her children when they were young. “We discerned God’s call to send our children to Catholic schools, and then my own deepening faith and desire to instill a love for God in young people led me to follow after them when I returned to work,” Whitehouse said. As she begins her new role as the Head of School for Lourdes’ North Campus, Whitehouse hopes to “support families in the formation of their children to know, love and serve God, and this contribute to the renewal of Catholic culture that is so desperately needed today. Born in the Slovak Republic and ordained a priest just last year, Father Stefan Zarnay is part of the Disciples of the Hearts of Jesus and Mary, the religious order that oversees St. Mary’s Catholic Parish in Littleton. He met them when he was studying for his Masters Degree at the John Paul II Pontifical Institute in Rome, Italy. He has previously served as Chaplain of the Stella Maris — La Gavia Catholic School in Madrid. In addition to being the interim principal of St. Mary’s, he is also the school’s chaplain and the parish’s new parochial vicar. For Ann Zeches, education is a second career. Prior to becoming a mom, Zeches was the assistant general manager of a resort. It was when her children were in school that the seed for Zeches’ career in Catholic education was planted. “What I thought teaching entailed, and the reality are two different things,” Zeches said. “Education is the toughest job I have ever experienced, but the one with incredible rewards. Education has become my passion.” In her new role as principal at St. Catherine of Siena, her goal is simple: “I am forming students to know the ‘truth’ of our faith and how to infuse it into their lives. Ultimately, then, they will be well-educated disciples of Christ longing to meet our Lord in heaven while making their community a place filled with the Spirit.”

Editor’s Note: An earlier version of this article misstated the religious order which Father Stefan Zarnay belongs to. We apologize for the error.