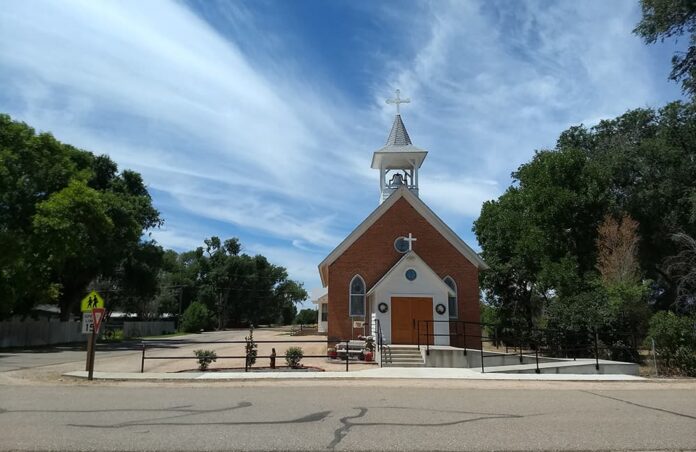 A hundred years ago, the Catholics of Weldona, a farm community 80 miles northeast of Denver, built a red brick church topped by a white steeple on the corner of Warren Avenue and Cottage Street, which they named after St. Francis of Assisi.

On July 20, the congregation filled their charming gothic-style church to capacity (about 90 people) to mark its centennial anniversary with a Mass, followed by the blessing of a statue of their namesake saint, and a luncheon at the local school.

“It is a time to lift up our hearts in gratitude to the Father for all that has been accomplished here and for all the celebrations — the Eucharists, baptisms, weddings, confessions, confirmations, funerals — all that has taken place here and give thanks to the Lord.”

Their church was established because the founders had a relationship with Christ and lived lives that bore witness to that relationship, the archbishop said. He encouraged the current congregation to continue to do likewise.

“Your neighbors, your co-workers — all should know that you are Catholic by the way you live your life. They should know that there is something different about you because of your faith in Jesus Christ and your trust in him.”

St. Francis is a mission of St. Helena Church in Fort Morgan (Our Lady of Lourdes in Wiggins is also a mission of St. Helena). Prior to St. Francis being built, the Catholics of the area were served by a priest traveling by train from Brighton. Father Bernard Froegel took care of 18 mission congregations in northeast Colorado. He celebrated the first Mass in Weldona in 1911 in Schafer’s Hall. With the permission of Bishop J. Henry Tihen, Father Froegel urged the people to erect a permanent church. Fundraising began and the Theodora and Henry Arnold family donated the lot on which the present-day church sits.

Vivianne Lorenzini, a convert to Catholicism, has worshiped at the church for as long as she has been married, 39 years. It was the faith of her husband Rick’s family. Their two now-adult children made their sacraments there.

“My husband’s family, both sides of his family, are among the founding members of the church,” Lorenzini told the Denver Catholic. “We now have the sixth generation attending. There’s a lot of other families in the valley like that here.”

“The same families who founded the community are the ones who continue to sustain it. They see the church as something that binds them together,” he told the Denver Catholic. “They’re mostly farmers who live a simple life. They are very hardworking and rely on God’s providence for their crops. They know how much they depend on God. They have a deep connection with God and the earth.”

Over the years, the congregation of 100-150 families has made improvements to their beloved church, which offers a 7 a.m. Sunday Mass. In 1961, the Union Pacific Railroad donated a frame depot, which the congregation moved to a site adjacent to the church and turned into a three-room parish hall. The church interior has been renovated and the original stained glass windows refurbished. New steps and a ramp were installed. Parishioners memorialized the church’s 90th anniversary by installing an outdoor bench. For the centennial anniversary, they added a statue of St. Francis and planted trees.

St. Francis, the 13th century Italian founder of the Franciscan orders of friars and patron of Colorado, of animals and of the environment, is a fitting patron for the rural church. For the anniversary celebration, parishioners were given a book of the history of St. Francis Church and the Weldon Valley, a bookmark with the prayer of St. Francis, and a used Eucharistic candle filled with grain from various farms in the valley.

“We all went — me, my husband and children,” she said. “We visited the Vatican and all the [main pilgrim] churches. They were beautiful, but I feel closest to God in this church. It’s home and I feel closer to God here.”