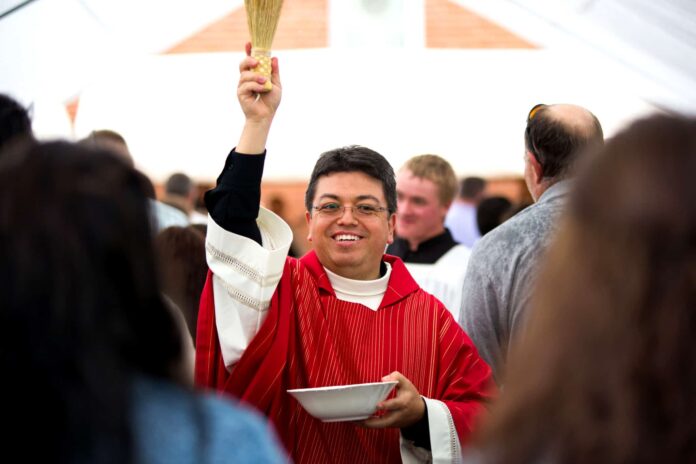 “It’s a sign for the Church,” said Father Carlos Bello-Ayala, pastor of the parish for the past six years. “It shows it’s alive — even though we have all these problems, all these difficulties, persecution.”

“I see that in a rural town, still people have the desire to find God in this small church,” he said. “For me, it’s a sign that with a few people that God has in this church, we can be a big sign for those who are far away from God.”

Holy Family celebrated its 100th anniversary on June 8 with Mass celebrated by Archbishop Samuel J. Aquila followed by a reception.

The parish, located in a town of just over 1,200 people, has around 65 families. Although it gone through ups and downs, its parishioners, many with deep ties to the parish, have remained faithful and worked hard to keep the parish alive.

Anita Lutz, whose family helped found the parish, has been involved in both Sacred Heart in Roggen and Holy Family (both run by the same pastor) throughout her life.

Lutz, who has been a member of the Altar and Rosary women’s group, appreciates Father Bello-Ayala’s efforts to bring the diverse groups of the parish and has enjoyed getting to know the Hispanic community better.

“That really made an impact on me in the last couple years,” she said. “We’ve done a few projects together, and it’s worked out really well.”

Amy Veith, President of the Pastoral Council and a member of the parish’s Altar and Rosary society, has been at Holy Family around 11 years and has also been impacted by the rich diversity at the parish.

“I have especially enjoyed getting to know some of the families from our Spanish Mass, and I think we are pretty successful at bringing all of our parishioners together and embracing the wide diversity our little parish has,” she said.

Veith explained that the small rural community loves and takes care of each other.

“We are tiny but mighty,” she said.

Father Bello-Ayala remembers one particular instance when he experienced the concern of his parishioners.

“We had a very bad storm,” he said, and the meeting he was supposed to attend with parishioners was canceled.

“People were calling and texting me, saying, ‘Father, is everything ok?’

“People are always connected [here], taking care of each other,” he said.

Although Father Bello-Ayala’s six-year assignment at Holy Family recently ended, he was instrumental up until the end in bringing his own parish community together, as well as reaching out to the local community, particularly through the Neocatechumenal Way.

“We are visiting houses two by two every year in order to call people, those who are fallen away Catholics,” he said. “Our mission is to invite.”

He believes the parish’s 100th anniversary is a message to Keenesburg that “we are a Catholic Church that is alive, that is vibrant, and we are welcoming those who are in need of God.”

The turnout at the anniversary Mass also gives him hope for the parish’s future.

“To see almost 200 people in one Mass, that was amazing,” he said. “Everybody was happy sharing together and celebrating that 100th anniversary.”