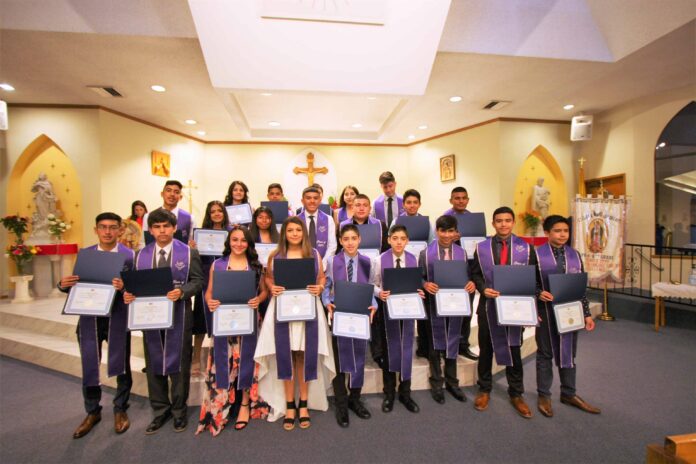 Before she passed away in 2012, Sister Susan Swain, one of the founders of Escuela de Guadalupe, gave a video interview where she explained her dreams for the school.

She also stated her hopes that the school would eventually go all the way through eighth grade.

Sister Swain’s goals were not in vain — Escuela’s first eighth-grade class graduated June 7 and the school will celebrate its 20th anniversary this August.

Michelle Galuszka, Development Director at Escuela, said that both Sister Swain and Father Tom Prag, a Jesuit priest who was the school’s primary founder, were “looking down with big smiles on their faces and were there with us on Friday night when we had our eighth-grade graduation.”

Galuszka, who will become Escuela’s president on July 1, just finished her fourth year at the school and has seen first-hand the tremendous growth it has experienced.

When it first opened in north Denver, Escuela was a K-2 school and continually added grades 3-5.

“We opened with the intent that the neighborhood really needed a school that reflected the community around it,” said Galuszka.

The founders decided Escuela would be a dual language Catholic school  (the only one in Denver) because the neighborhood was predominantly Hispanic.

They always hoped to offer a K-8 grade program, so four years ago Escuela moved to the former Presentation School campus to embark on an expansion. Now, it offers grades pre-kindergarten through eighth grade.

“When we left our old school and our K-5 model, we had 124 students,” said Galuszka. “We finished this school year with 214 students. It’s incredible.”

Philip Evans, a middle school math and religion teacher at Escuela, first got involved with the school through his master’s program but is choosing to stay at the school next year.

“Some of the big things that are drawing me here are the community and how invested all of the families are, as well as the bilingual model,” he said.

“It’s something where speaking Spanish is celebrated and there’s a lot of confidence in the students in that. We’re valuing both languages, and the students realize that.”

Evans noticed that this year’s eighth grade class is “mature, independent and had a desire to make a difference.”

They also take their faith seriously — 20 of the 21 graduates are going on to attend Catholic high schools this fall.

When the school staff found out each student that applied to a Catholic high school was accepted, it “was just a huge excitement wave that went through our building,” said Galuszka.

As Escuela enters its 20th school year this August, Galuszka and her fellow staff members look forward for even more growth to come.

“I’m really excited for what’s to come in the future of this school,” said Galuszka. “We really hope to be a model for future schools in how we have adopted the dual language, faith-based program for our students.”