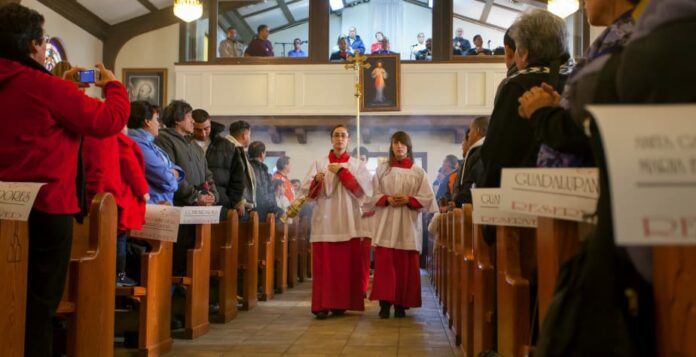 It used to be a reliable assumption. Hispanics in the United States, particularly Latin American immigrants, were Catholic.

But a survey by the Pew Research Center, released earlier this month, reportedly found a substantial decline in the percentage of Hispanics who self-identify as Catholic.

Fifty-five percent of the country’s Latino adults belong to the Church, Pew researchers say, which is a drop of 12 percentage points from a similar report released in 2010. The survey found 18 percent are unaffiliated, 22 percent evangelical or mainline Protestant, and 4 percent identify as “other Christian” or “other.”

More than half of Catholics in the Archdiocese of Denver are Hispanic and the Church stepped up efforts to catechize and support immigrants and other Latinos more than a decade ago. The archdiocese opened Centro San Juan Diego in 2003, which supports immigrants with pastoral and family services.

“Our Hispanic ministry is a model for the rest of the country,” said Karna Swanson, director of communications for the Archdiocese of Denver. “We take very seriously our role in helping immigrants to grow and maintain their faith.”

The Pew survey did not break down the country by regions, so no data indicate whether Denver and northern Colorado are defying the trend.

Parishes throughout the archdiocese offer 86 Masses each week in Spanish. Swanson said 60 priests, out of a total of more than 300, and seven deacons in the archdiocese are Hispanic or Spanish-speaking, and that the number continues to grow.

Though secular media report the new numbers as a sky-is-falling scenario, Swanson said the big picture is more positive. A 71 percent retention rate among Catholic Hispanics defies success statistics of nearly all other major denominations.

“As immigrants assimilate, many will take on secular aspects of American culture,” Swanson said. “They are no different than Irish or Italian immigrants in that regard.”

“Most Hispanic immigrants in Denver and the rest of the U.S. are from farms and rural villages in Mexico,” explained Msgr. De los Santos, who migrated here from the northern Mexico city of Torreón in 2003. “Most did not have the benefit of regular access to priests. So Catholicism has become mostly a cultural tradition, with little good information about the teachings of the Church.”

Another issue involves the high volume of Latin American immigration over the past 20 years.

“Obviously, the Catholic Church in the U.S. was not prepared to receive such a large number of Catholics who do not speak English. So, most have been unattended to,” Msgr. De los Santos said.

Here’s the good news. “The American Church is receiving immigrants the best way we possibly can,” Msgr. De los Santos said, explaining that Hispanic ministry in the Archdiocese of Denver employs 12 full-time people dedicated to supporting Catholic immigrants. “We are so grateful for this American Church.”

Elias Josue Moo is a 29-year-old son of Mexican immigrants and knows first-hand about the trend of Hispanics leaving the faith. Though his parents brought him up in the Church, he quickly ignored it after going away to attend Notre Dame.

“Even at Notre Dame there is no way to get around the influence of the secular culture,” said Moo, assistant principal at St. Rose of Lima Catholic Academy in Denver.

Moo said young Hispanics, like other millennials, are consumed by a secular culture that promotes “freedom” as doing whatever a person desires.

“It’s in music, film, TV and all over the Internet,” Moo said.

He believes young Hispanics typically rebel against immigrant parents who view the sacraments more as cultural traditions than gifts from God, Moo explained, which doesn’t inspire them to embrace the faith.

Moo returned to the Church after graduating from Notre Dame and moving to Denver, where he encountered peer support from faithful young adults involved with various archdiocesan ministries. He studied theology of the body, attended a retreat and had a personal encounter with Jesus that showed him the real meaning of freedom.

“Too many people who have been catechized on doctrine still lack that personal encounter with Christ, and we need to begin simulating the way Jesus went out and called the disciples by name,” Moo said. “We can revert fallen-away Hispanics to the faith, but it has to be about an invitation to something bigger and better. What the secular world offers will bring them comfort and pleasure initially, but it will not fill the void their hearts have for Jesus Christ.”

Ana Lluna thinks part of the problem involves children of immigrants who don’t speak Spanish fluently or at all. Lluna and her husband, Jorge, are missionaries from Spain working through the Neocatechumenal Way to catechize immigrants throughout the archdiocese.

“The second generation is so assimilated they don’t even speak Spanish, but their parents obligate them to attend Spanish Mass,” Lluna explained. “They go, but they don’t know the words. Everything in their life is in English, except the Church, and the culture tells them all they really need to have the American dream is money. That, they understand. The Church, they don’t understand.”

Though Hispanics are assimilating to an increasingly secular culture, Moo holds out great hope for the future. What worked for him will work for others, he believes, if the Church continues shining the light of Jesus.

“When people fall in love with Christ they will naturally discover that they can’t live without his Church and will desire to live more closely in communion with her,” Moo said. “It starts with that first encounter.”