For justice and healing: Catholics explain why they marched against racism 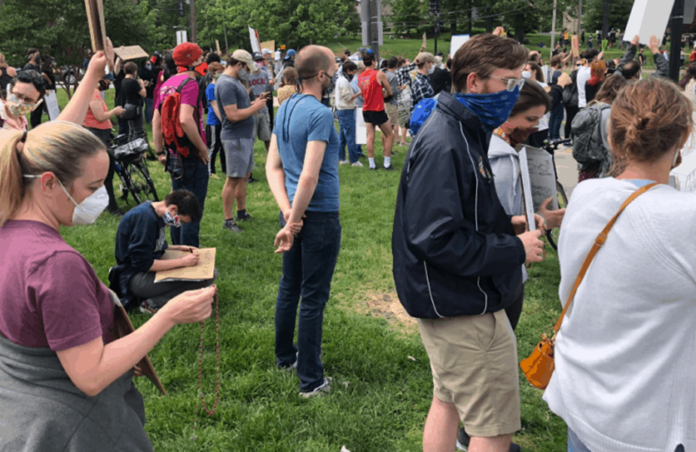 Lay Catholics joined Dominican friars, nuns, and priests of the Washington archdiocese in prayer for justice and healing. As tens of thousands of Americans have been actively protesting racism and police brutality, Brown, who is an African-American and Catholic, told CNA he chose to focus on prayer.

The present moment demands both prayer and action against injustice, he told CNA. “It’s a both-and.”

“Ultimately this is a problem of the heart,” Brown said. “Our country desperately needs God and the love of God to heal these wounds.”

Brown spoke of acute pain within the African-American community, caused by the recent deaths of young African-Americans at the hands of police or fellow citizens — most notably George Floyd, Ahmaud Arbery, and Breonna Taylor — which, he said, are just the latest in a centuries-long history.

“As an African-American, the pain of going back into that history is so painful, and is so gut-wrenching, and it’s so hard to deal with,” he said.

“Part of it is just the fear,” he said, of being pulled over in a “routine traffic stop” that could end in a tragedy—“or something could get pinned on me.”

“It’s an anger, it’s an anxiety, and it’s also a fear of it happening again, and a pain of seeing what others have gone through,” he said.

Video of George Floyd’s May 25 arrest in Minneapolis showed him calling out “I can’t breathe” and “mama” as police officer Derek Chauvin knelt on his neck. Floyd later died at a hospital, and Chauvin has since been fired and charged with second-degree murder in Floyd’s death.

“Whether you’re black or white, you can’t help but see that person as our brother and as a child of God,” Brown said of Floyd crying out.

Yet protests against injustice, he emphasized, must be rooted in “the right to life” for all and not be “hijacked” by the culture of death.

“The rioting, the looting, is only making it more likely that a black man like me will be a victim of police misconduct, or a victim of bias and stereotypes,” Brown said.

Most who talked to CNA of their experiences were lay men and women, although both a priest and a religious sister—Fr. Brent Shelton of the diocese of Knoxville, and Sister Mumbi Kigutha CPPS, of the Sisters of the Precious Blood—said they too attended local protests against racism.

Some Catholics said it was their first protest; others said they had attended a pro-life march before, but now felt the need to march against racism. Some marched with fellow Catholics and Christians, others attended larger marches by themselves.

All involved all had one thing in common—they felt that they had to do something to stand against injustice.

“To me it’s simple. People need help and we help them. That’s all,” said Jenne O’Neill of Wahoo, Nebraska.

And many of those who talked to CNA said they prayed at the rallies and protests.

Peter Nixon, a parishioner at Saint Bonaventure Church in the Diocese of Oakland, said his pastor led a Eucharistic procession at the tail end of a march in Clayton, California.

“The presence of the Blessed Sacrament had a powerful impact on many at the demonstration,” Nixon said. “Some police and firefighters crossed themselves as we passed. Others genuflected when passing in front of the monstrance.”

Jenn Morson, a writer and parishioner at St. Elizabeth Ann Seton church in Crofton, Maryland, said she prayed the rosary to herself “in between chants initiated by the organizer” at a local march with around 350 people.

Not all Catholics who talked to CNA marched in protests. Some have been conducting outreach in their communities, or trying to foster constructive conversations about race.

Kathy Redmond, of St. Francis of Assisi Parish in Castle Rock, Colorado, told CNA that she has organized around 450 people in her local “very white, affluent community” involved in community outreach.

Redmond said she saw injustice first-hand when a black family moved in four houses down from her and their cars were tagged immediately. “It was very unnerving for me,” she said. “It was in my face at that point.”

“As people of faith—as people of a Christian faith—we should be front and center on this,” Redmond said.

Catherine Perry, of Atlanta, Georgia, founder of the InwardBound Center for Non-Profit Leadership, has organized workshops of cross-race conversations on “Racism in America: What is Mine to Do?”

Her workshops are not shaming sessions, she said, but rather help participants to reflect, dialogue, and reconcile with each other, ending with them making a “uniquely personal to-do list” such as prayer, listening to voices they may not agree with, or talking to a boss about subtle discrimination in the workplace. A new workshop will be offered online beginning on June 25.

As Catholics, she said, “one of the great things about our institution is we talk about difficult things” such as abortion and the death penalty. “We understand this is mysterious stuff, and it’s emotional work, and it’s not easy sometimes,” she said.

“Well let’s take on race. Why not?” she asked. “We’ve been silent on race too long.”