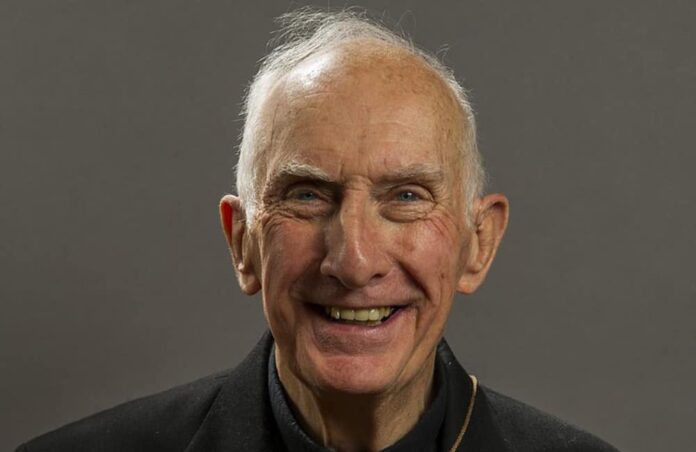 Deacon Jim Wall passed away in the early hours of the morning August 31.  He had just turned 87 years old.  His diaconal ministry took him to Sts. Peter and Paul Parish in Wheatridge, CO and St. Bernadette Parish in Lakewood, CO.

James Robert Wall was born on August 9, 1933 to Lusius and Theresa Wall in Sioux Falls, South Dakota.  Two weeks later, he was baptized at St. Joseph’s Cathedral in Sioux Falls.  His mother and father were very devout, “Irish-Catholics,” attending daily Mass and routinely inviting priests and religious to the house for dinner and fun.  He went to Catholic school at the Cathedral where he was baptized, until they moved to Denver.  In Denver,  Jim went to Regis Jesuit High School.  Still, it was his parents who were his primary examples of holiness and devotion.  Ingrained in his memory, he remembered his mother coming out of daily Mass and speaking with the homeless, handing them food and rosaries. He also recalled peeking in his parent’s bedroom and seeing his father kneeling down to pray before retiring for the night.

After graduating from high school, he went to Regis University and finished at New York University, where he received a degree in History. He then volunteered for the draft and entered the Army.  After getting out of the Army, three years later, he began working in banks in New York City.

As he made trips back to Denver to see his parents, he met Harriet (Joey) Fish, whom he claims was the biggest influence in his life.  He and Joey were married at Christ the King Parish in Denver on September 5, 1960.  The couple’s 60 years of marriage included the blessings of six children, Brenda, Katie, James, Cecilia, Eileen, Mary; 18 grandchildren and nine great-grandchildren.

In 1965, the family moved back to Denver and Wall started working as a financial broker.  Eventually, he would start his own company, known as Wall and Company.  Soon after his return to Denver, his father passed away.  His father’s death caused Jim to reflect on the strength of his parents and his wife’s faith which ignited a passion to get very serious over building a strong relationship with God.  His quest took him back to Mass and the Sacraments.  He also became a member of the School Board at St. Fatima Parish, joined the Knights of Columbus, and volunteered with the Teens Encounter Christ and Pro-Life Programs.

According to Wall, it was the Holy Spirit and Our Blessed Lady that led him to the diaconate.  On June 6, 1996, Archbishop Francis Stafford ordained Deacon Wall at the Cathedral Basilica of the Immaculate Conception.  He was immediately assigned to Sts. Peter and Paul in Wheatridge, Colorado and then later assigned to St. Bernadette’s Parish in Lakewood, Colorado.  He formally retired from ministry on December 1, 2011 but continued to minister as his health allowed.  During his ministry, he was the first Deacon to receive the Legatus Pro-life award for his efforts in helping raise awareness of the plight of the unborn.  He also was very involved with the Deacon Formation program, Operation Rescue and the Legions of Mary.

“My mind always goes to Deacon Jim when I think about the pro-life activities of the Diaconate,” stated Deacon Joseph Donohoe, Director of Deacon Personnel. “But my heart rejoices in knowing that the unborn have a deacon advocate, more powerful than before, that intercedes at the throne of Our Lord.  He will be missed by his brother deacons.”

A Vigil Service for Deacon Wall was held at St. Fatima Parish on September 8.  The Mass for Christian Burial was held on September 9at the Cathedral Basilica of the Immaculate Conception with Bishop Jorge Rodriquez presiding.  The interment was conducted at Mount Olivet after the funeral Mass.  Deacon Wall had requested that, in lieu of flowers, all donations be sent to: Catholic Charities – Respect Life Ministry, Attn: Accounting Dept., 6240 Smith Road, Denver, CO 80216