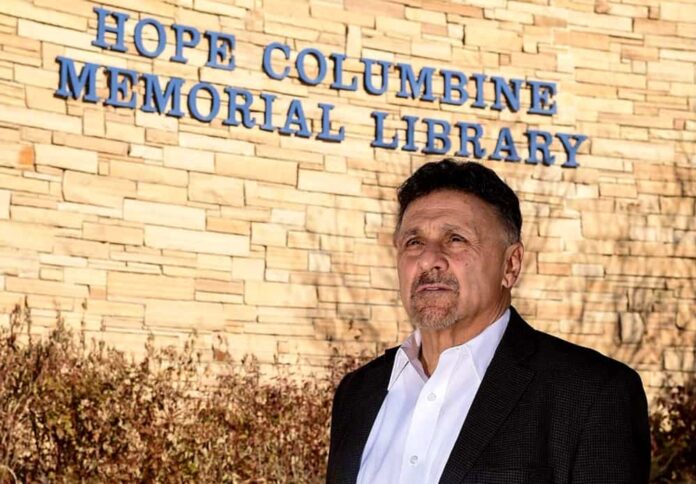 “Mr. De” sat wide awake that night in his brother’s house. He was in disbelief at what had occurred. And, as a cradle Catholic, for the first time in his life, he questioned his faith: “God, how could you let this happen? These poor kids!”

Frank DeAngelis, the principal of Columbine High School the year of the shooting, didn’t know that in the wake of such tragedy, God would call him to stay in the very place that had deeply marked him in order to rebuild a hurting community. In his newly-released book They Call Me “Mr. De,” DeAngelis tells the story of Columbine’s heart, resilience and recovery.

He spoke with the Denver Catholic about his faith-filled experience and his new book.

“A lot of this book is about my faith and how it allowed me to recover and to do what I continue to do,” he said.

“I was in my office that day getting ready to go to lunch duty… I was talking to a teacher [when] my secretary showed up at the door — I can remember her so vividly — and said, ‘Frank, there is a reported gunfire!’” he recalled.

He was in disbelief.

“This can’t be happening. I’ve been part of this school. It’s a fantastic school [with] a lot of parental support, great kids,” he thought. “And when I ran out of my office, my worst nightmare became a reality: I saw a gunman that was coming towards me, and everything just seemed to slow down.”

Instead of fleeing, he ran toward the gunfire.

“People have asked me, ‘Why would you do that?’ And the reason I did it is that I had some of my kids in danger. They were coming from a class… and they were going to be in the middle of the gunfire. And I ran down there to protect them,” he said.

The former principal found himself leading a group of 25 to 30 students to the gymnasium, where they could lock the doors from within, with the gunman approaching.

He pulled on the gymnasium door — it was locked.

He reached into his pocket, pulled out a key ring with about 30 keys, introduced a random key, and opened the door on the first try.

“I tried [to replicate] that for 15 years later, but never could” he said.

But the story was just beginning, and he had to process everything that had happened on that day: the twelve students and teacher that had died, the dozens who were wounded.

“It was two days later that my life changed, and I’m eternally grateful,” DeAngelis said.

Father Ken Leone, who was pastor of St. Frances Cabrini Parish, DeAngelis’ home parish, invited him to a candlelight vigil for the victims. DeAngelis hesitated; he was overwhelmed. Father Leone insisted, and the school principal finally accepted.

“[Father Ken] calls me up on the altar and brings some of the students who were part of the youth group and they came over and extended their hands over me and prayed for me,” he said. “And I felt something, the Holy Spirit, descend upon me. Then Father Ken whispered in my ear, ‘Frank, you should’ve died that day, but God saved you and he’s got a plan: Now you need to rebuild that community… Frank, it’s going to be a tough journey, but you never have to travel that journey alone.’

“And the thing that really turned it around for me is that he said, ‘Frank, you’ve got to believe this: You’ve got to live by faith and not by sight.’”

Father Leone accompanied him in his process of healing and so did Father Sean McGrath, when he became pastor of the parish.

“Their help, along with the help of a [Catholic] counselor, were the reasons why I was able to heal,” he assured. “I got counseling along with spiritual support, and that’s the message I share with communities that experience similar tragedies about having that support system in place.”

DeAngelis would remain the principal of Columbine High School for another 15 years, with the conviction that God had given him the mission to help students and the community heal.

He currently serves as a consultant for safety and emergency management for the Jeffco School District and speaks nationally and internationally.

“Hopefully people don’t have to go through a ‘Columbine,’ but there is an assurance we’re going to go through tough times in our lives,” he concluded. “And the piece of advice that I give is you never have to travel that journey alone.

“For me, the journey was a tough journey, but I knew my faith was so important to me that I had that support and belief that God was there to help me.”