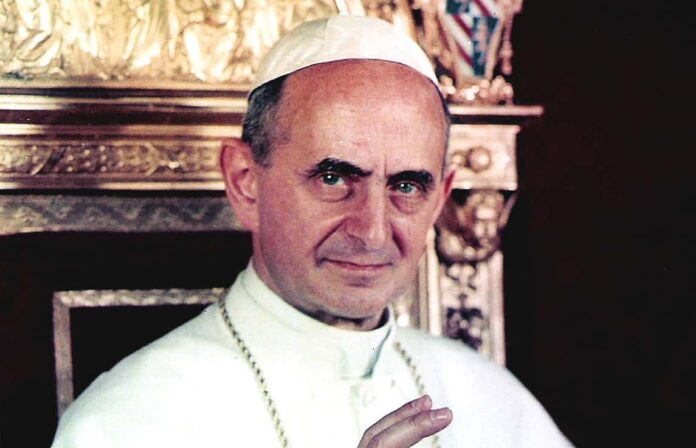 Pope Paul VI was certainly not the most popular pope of the 20th century. The two events that marked his pontificate were not short of controversy, debate and rejection: the Second Vatican Council and the publication of Humane Vitae.

And yet, 40 years after his death, priests and faithful will be able to celebrate his memorial for the first time on Wednesday, May 29 — an occasion to reflect on his life and greatest teachings. Although the proper liturgical texts have not been officially translated from the Latin, priests will be able to choose from the “Common of Pastors: For a Pope.”

“Among [the popes], Paul VI shines out as one who united in himself the pure faith of Saint Peter and the missionary zeal of Saint Paul,” Cardinal Robert Sarah, Prefect of the Congregation for Divine Worship and the Discipline of the Sacraments, wrote in a decree published Jan. 25, 2019.

The future pope, Giovanni Battista Montini was born to a Catholic family Sept. 26, 1897, in Concesio, Italy. He was ordained to the priesthood on May 29, 1920. Pope Francis chose to insert the celebration of Saint Paul VI into the Roman Calendar based on this day.

After his ordination, he worked as a member of the Vatican Secretariat of State under popes Pius XI and Pius XII, and also as a chaplain for Catholic university students.

Cardinal Sarah also asserted that, as the Substitute Secretariat of State, “he worked during the Second World War to find shelter for persecuted Jews and refugees.”

Father Montini was named Archbishop of Milan in 1954 and cardinal in 1958 by Pope John XXIII. He helped the current pope in the preparation of the Second Vatican Council, which he chose to continue after he was elected to the See of Peter in June 1963.

The publication of his last encyclica, Humanae Vitae, in 1968, in which he affirmed Catholic teaching on marriage, sexuality and contraception, was received by some as prophetical and by others as unrealistic and inhumane.

The Archbishop of Denver Samuel J. Aquila published a pastoral letter titled The Splendor of Love in February 2018 in commemoration of the 50th anniversary of Humanae Vitae, in which he affirmed “the great beauty of the Church’s consistent teaching through the centuries on married love, a love that is so desperately needed today.”

In his letter, the archbishop highlighted the positive and negative developments in the understanding of human sexuality and marriage in the last 50 years; and through Scripture, John Paul II’s Theology of the Body and pastoral experience, presented an argument for the truth and beauty that Humanae Vitae offers in marriage and family life.

“[Pope Paul VI] defended the integrity of married love and warned us against the danger of reducing sexuality to a source of pleasure alone,” Archbishop Aquila wrote. “[He] teaches us the truth about married love, listing its four essential qualities: It needs to be fully human, total, faithful, and fruitful.”

He also called all priests and faithful to “share the liberating truth of God’s plan for sexuality… The world and its families need this witness to find lasting happiness.”

“He wished nothing other than the Church would have a greater knowledge of herself in order to be ever more effective in proclaiming the Gospel,” Cardinal Sarah said.