His Church. Our Experience.
Subscribe
HomeLocal90 years of Catholic news with ‘snap, vigor and courage’
Local

90 years of Catholic news with ‘snap, vigor and courage’ 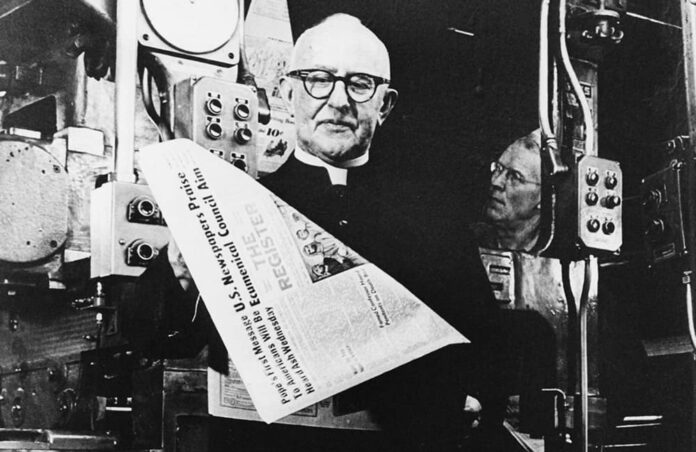 When 22-year-old lay journalist Matthew Smith took over as editor for Denver Catholic Register in 1913, he likely could have never imagined how God’s providence would allow the newspaper to flourish and endure — even to this day.

The National Catholic Register celebrates its 90th anniversary this year. Launched in 1927, the seed for the long-running newspaper was planted with the Denver Catholic Register. From it, Smith, who was ordained a priest in 1923 and named a monsignor in 1930, would spawn the Register System of Catholic newspapers in 1929, producing 35 diocesan editions with circulation of 850,000.

Unfortunately, the Register System was no more by 1970; however, the National Catholic Register stuck around and is now 90 years strong (and as a side note, so did the Denver Catholic…you’re reading from it right now, after all!)

In one of the first issues of the paper, Msgr. Smith promised readers a Catholic newspaper with “snap, vigor and courage” and one that would “always be loyal to the Church.” 90 years later, this seems to still ring true.

In an era of history where the Church is increasingly under attack for upholding values and morals that the culture at large deems to be “old-fashioned” or “archaic,” Catholic newspapers like the National Catholic Register stand boldly against the rising tide.

Msgr. Smith was never one to back down from a fight, and certainly didn’t compromise when it came to combatting the pressing issues of the time. For example, in the mid-1900s, when the Ku Klux Klan ran rampant in Denver, under the leadership of Msgr. Smith, the Denver Catholic Register’s reporting helped to debunk falsehoods the Klan was spreading about the Church at the time and helped to expose their hateful, racist organization for what it really was.

Msgr. Smith was honored at the 1953 Catholic Press Association gathering with a plaque that said as an editor “he has fought bigotry with courage and intelligence and in him the Ku Klux Klan had one of its most effective adversaries.”

Jones organized a toast to Msgr. Smith and the legacy he left on Catholic journalism in November. The work of Msgr. Smith underscores the evergreen importance for good Catholic journalism, Jones argued. Catholic news organizations face many of the same financial, social and technological challenges as other news organizations, but in some ways, their work is even more important because they work to proclaim the truth of Jesus Christ in a muddled world.

“Just as our time needs faithful Catholic voices to make the news, we need dedicated Catholics to report the news,” Jones said. “Good information and good reporting are vital to the situation of American Catholics, but simply reporting on these negative trends will be fruitless, unless Catholics organize and act intelligently and credibly. While grassroots advocacy is important, this task requires full-time, well-funded professional work.”

“I have the best job in the world,” King said. “I get to interview amazing, holy clergy, nuns and lay peoples and cover beautiful ministries and faith-related events that bring the light, love and joy of Christ to the world.