A meditation on “Maranatha” 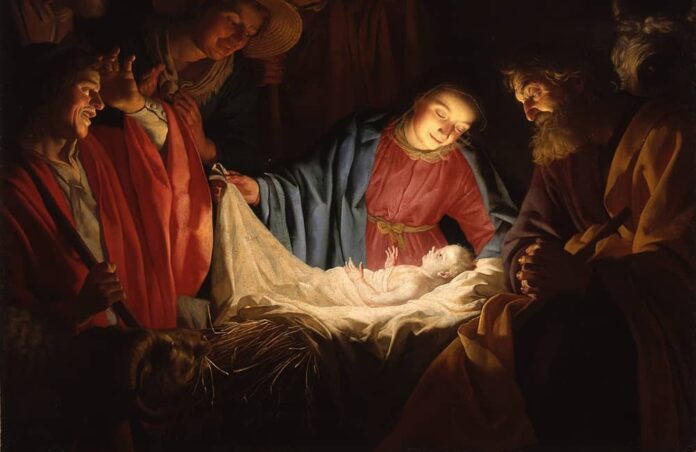 Happy (real) new year: the beginning of a new year of grace, which began December 3 with the First Sunday of Advent.

“The holidays” so overwhelm our senses each December that it’s hard to remember that Advent, the season of preparation for Christmas, has a “thy-kingdom-come” dimension as well as a Nativity dimension. For the first two weeks of Advent, the Church ardently and insistently prays the ancient Aramaic Maranatha: “Come, Lord Jesus!” And that petition is prayed, not in a spirit of disgust or resignation – “C’mon, Lord, let’s get this over with….” – but in the sure confidence that the Lord’s return in glory means the fulfillment of history: both the history of humanity and our personal histories. For in the Second Coming, history will be finally revealed as His-story, God’s story, in which we have been privileged to participate by grace.

The Maranatha also prompts the question, what did the first Christians mean by calling Jesus “Lord”?

As Dr. Rowan Williams puts it, they meant that Jesus is “the supreme authority.” No other authority trumped the authority of Jesus: not the Law, the Sabbath, or the Temple, for Jewish paleo-Christians; not Caesar or the gods of Greece and Rome, for the first Gentiles to meet Christ. And why was Jesus the supreme authority? Because Jesus displayed “exactly the same liberty to love indiscriminately as does God himself.” And God himself ratified Jesus’s claim to be the embodiment of that indiscriminate, boundless love by raising Jesus from the dead, which “…made him both Lord and Christ” (Acts 2.36).

The Church of the New Testament and the Church of the Fathers worked out in creed and doctrine what that first confession of faith – “Jesus is Lord” – meant and implied. It meant that the God of Israel intended his salvation to reach all peoples. It meant that Jesus was fully participant in the life of God himself (“consubstantial with the Father,” as the Nicene Creed puts it). It meant that God was thus a Trinity of persons, united in one godhead by the mutual gift and reception of love.

And that meant that the child born in Bethlehem is, to return to Dr. Williams, “the earthly face on an eternal love [among] Father, Son, and Spirit.” Which was, in turn, a statement about us as well as about the triune God. For if we are given a share in that divine life through Baptism, then “being in the body of Christ, the community of baptized believers, gives us the freedom to love God the Father as Jesus loves him, through the gift of the Holy Spirit, and so too to love the world with the unquestioning generosity of God, never restricting ourselves to those who are familiar to us and are like us.”

To say “Jesus is Lord” is to see the world aright and to behave differently. To say “Jesus is Lord” is to see children of God where before we saw only difference, and to treat others with the respect that befits those whom God has loved so much as to offer them the possibility of friendship with his incarnate Son. Indeed, to say “Jesus is Lord” impels us – or should impel us – to offer others the gift of friendship with the Son that we have been given, not by our own merits, but by sheer grace. That is what it means to be a missionary disciple in a Church permanently in mission: it means to deal with the world as generously as God has dealt with us, in order to convert the world.

What, then, does it mean to pray in the Maranatha that the Lord will come again? It means to understand that the end of the story has already been revealed in the Incarnation and above all in the Resurrection. God is going to win, in the end, whatever the travails that beset his people between now and then. That conviction is not an invitation to indifference; it is a counsel against despair, about both the life of the Church, when that becomes roiled, and the life of the world, when that turns sour.

So, yes, come, Lord Jesus: and give us the strength and wisdom to prepare a fitting place for your return.