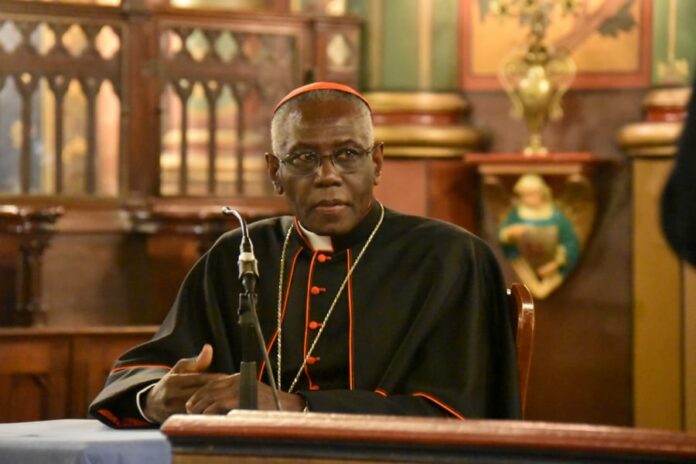 Cardinal Robert Sarah is one of the adornments of the Catholic Church, although it’s very unlikely that this man of faith, humor, intelligence, and profound humility would appreciate my putting it that way. His 2015 book, God or Nothing, is selling all over the world, currently available in twelve languages with more to come. The book tells his story, that of a contemporary confessor of the faith who accepted episcopal ordination knowing that he might well be killed for his witness to Christ by the madcap Marxist dictator who then ran his West African country, Guinea. But the point of God or Nothing is not to advertise the virtues of Robert Sarah: the book is an invitation to faith, addressed to everyone, but with special urgency to those parts of the world dying from a suffocating indifference to the things of the spirit.

The cardinal, who was appointed by Pope Francis as Prefect of the Congregation for Divine Worship and the Discipline of the Sacraments with the mandate to continue the reform of the liturgical reform accelerated by Benedict XVI, was in Washington recently to address the National Catholic Prayer Breakfast. Cardinal Sarah is not a showman, but he made a deep impression on the 1,300 in attendance by the depth of his faith and the lucidity of his presentation. He spoke movingly of the solidarity of which human beings are capable because we’re made in the likeness of the original communion of solidarity – the Holy Trinity. And in that context he defended the weakest and most vulnerable among us, in all stages of life, calling his American audience to live the truths on which the nascent nation staked its independence.

He then warned, quite rightly, that the “death of God” too often results, not in God’s burial, but in the “burial of good, beauty, love, and truth” through their inversion: “Good becomes evil, beauty is ugly, love becomes the satisfaction of sexual primal instincts, and truths are all relative.”

This accurate description of one root of today’s culture wars earned Cardinal Sarah the usual rebukes in the left-leaning Catholic blogosphere, where that shopworn parade of horribles – Manichaeism, culture-warrior, not-with-the-Pope Francis-program, etc. – was dusted off and trotted out yet again. Ironically, however, Cardinal Sarah’s address and his portside critics’ predictable response more-or-less coincided with a striking blog post by a Harvard Law School professor, Mark Tushnet, who seems not to have gotten the memo from the Catholic left that we should all just get along. Thus Professor Tushnet, writing in a post entitled “Abandoning Defensive Crouch Liberal Constitutionalism:”

“The culture wars are over; they lost, we won….For liberals, the question now is how to deal with the losers in the culture wars. That’s mostly a question of tactics. My own judgment is that taking a hard line (‘You lost, live with it’) is better than trying to accommodate the losers who – remember – defended, and are defending, positions that liberals regard as having no normative pull at all. Trying to be nice to the losers didn’t work well after the Civil War…And taking a hard line seemed to work reasonably well in Germany and Japan after 1945….”

There is intolerant, aggressive, God-burying secularism in a nutshell: those of us who believe in marriage as it’s been understood for millennia, the right to life of the unborn and the elderly, men using men’s bathrooms, and religious freedom in full are the equivalents of post-Civil War lynch mobs, Nazis, and kamikaze-inducing Japanese militarists. Instead of berating Cardinal Sarah for speaking truth to dominant cultural and political power, might it not behoove his carping critics in the progressive Catholic blogosphere to challenge those in their political camp, like Mark Tushnet, who commit such calumnies – as some of us on the other side of the aisle, so to speak, have challenged the calumnies of Donald Trump? Is there no courage to be different left on the Catholic left?

Leon Trotsky, the old Bolshevik eventually liquidated by Stalin, famously said that “you may not be interested in the dialectic, but the dialectic is interested in you.” Change “dialectic” to “culture war” and you’ve got the truth of our situation, as Cardinal Sarah understands. Recognizing that truth is the beginning of any serious effort to follow Pope Francis and heal, evangelize, and convert the culture today.