The way God speaks: A review of Cardinal Robert Sarah’s The Power of Silence 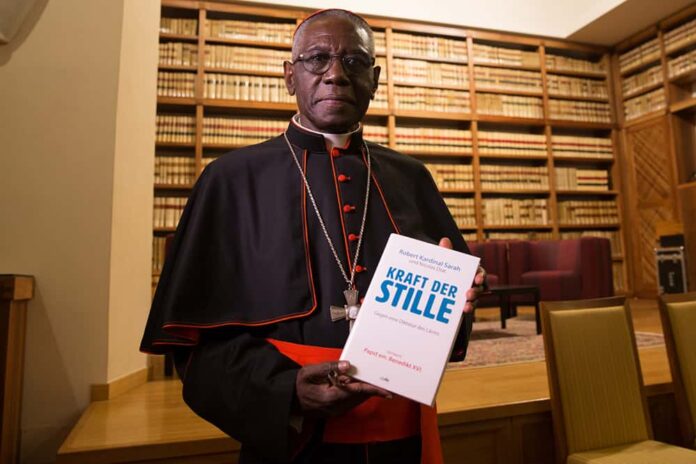 In the Catholic world, it was a year of silence. Martin Scorsese fulfilled his longstanding dream to adapt Shusaku Endo’s novel Silence for film. The book chronicles two young Jesuits in Japan searching for their lost mentor, rumored to have abandoned the faith. Japan experienced a massive number of martyrdoms as the Emperor banned the newly established religion in 1587, as it was gaining converts quickly. The novel asks: “Why is God silent in the face of this persecution?” Endo writes: “Behind the depressing silence of this sea, the silence of God … the feeling that while men raise their voices in anguish God remains with folded arms, silent.” It’s a question many people ask: Why is God silent?

This year also saw the release of Cardinal Robert Sarah’s second interview book, The Power of Silence: Against the Dictatorship of Noise. Cardinal Sarah, originally from Guinea, Africa, serves as the Prefect for the Congregation for Divine Worship and the Discipline of the Sacraments. Coupled with Scorsese’s film, his book makes a significant contribution. God is silent because, Cardinal Sarah tells us, silence is the language of God (238). We generally think of silence as a sign of absence or impotence, but Sarah points us to a deeper reality. God is present, but due to our inability to enter silence with a listening heart, we do not hear his voice.

“At the heart of man there is an innate silence, for God abides in the innermost part of every person. God is silence, and this divine silence dwells in man. In God, we are inseparably bound up with silence. … God carries us, and we live with him at every moment by keeping silence. Nothing will make us discover God better than his silence inscribed in the center of our being. If we do not cultivate this silence how can we find God?” (22).

Sarah also points out that we are making God silent in a different way today. Though many still ask why God is silent in the midst of suffering, even more people fail even to think about the problem. They are too busy, caught up in the constant noise and distraction of technological media. Sarah prophetically calls us away from distraction, calls us to the desert with Christ to hear the voice of God again. It is not a voice that answers our problems with clear, verbal solutions. It is a voice that speaks in the heart, speaking a language that surpasses words and gives answers beyond our desire for easy solutions.

The first two chapters explain the fundamental points that God speaks in silence and yet noise saturates our lives, crowding out any time or desire for silence. Chapter three establishes that we need silence to enter into prayer and the liturgy, because silence expresses mystery and profundity more deeply than words. The fourth chapter speaks directly to the issue of God’s silence in the face of suffering raised by Endo. We cannot understand evil, because it is irrational, but must prayerfully respond to it with Christ on the Cross who embraced it all. The last chapter consists of a beautiful and profound conversation with a master of silence, the Father General of the Carthusian Order, Dom Dysmas de Lassus.

Pope Emeritus Benedict XVI recently wrote a preface for the German edition of the book, strongly endorsing it. In the preface, he says “Sarah teaches us silence—being silent with Jesus, true inner stillness, and in just this way he helps us to grasp the word of the Lord anew.” He also tells us that “Cardinal Sarah is a spiritual teacher, who speaks out of the depths of silence with the Lord, out of his interior union with him, and thus really has something to say to each one of us” and that “with Cardinal Sarah, a master of silence and of interior prayer, the liturgy is in good hands.” The Power of Silence reveals the spiritual underpinning of the cardinal’s liturgical work and the need for all of us to enter more deeply into worship through silent participation in Christ’s offering of himself to the Father.

Overall, the book provides a timely and needed reality check. As technology pervades our lives more and more, we have to enter intentionally into the silence and solitude of intimacy with God through prayer. We also need to recognize the power of God’s silent presence in the world and our lives. To Endo’s assertion that “the silence of God was something I could not fathom,” Cardinal Sarah answers that silence is the way God speaks, if only we will listen.