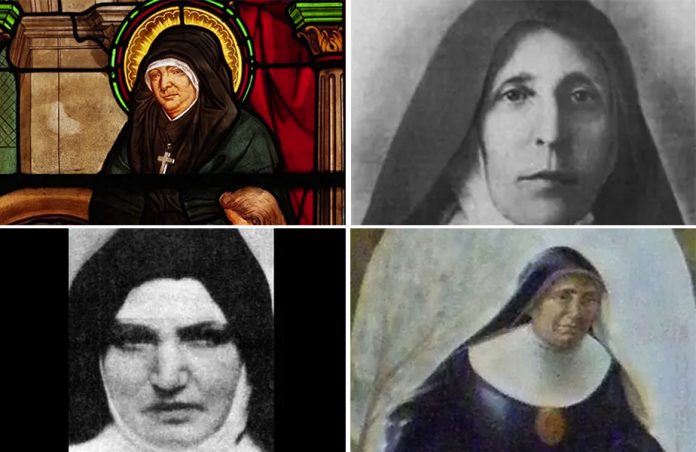 Pope Francis will preside over the first canonizations in more than two years this weekend.

Ten people will be officially recognized as saints by the Catholic Church on May 15. Among them are some relatively well-known figures, like Charles de Foucauld, Titus Brandsma, and Devasahayam Pillai.

Less well known are the four Catholic female leaders who will be canonized alongside them. Each of the women founded religious orders which have grown worldwide and made a lasting impact on the Church.

Here are the stories of these four holy women, who all happen to be named for the Blessed Virgin Mary.

As the French Revolution forced convents and monasteries across France to close and priests and nuns were martyred under the Reign of Terror, this 28-year-old Frenchwoman founded a religious order in 1796.

Marie Rivier founded the Congregation of the Sisters of the Presentation of Mary, dedicated to the education of young girls in the faith. The congregation received official approval in 1801 and expanded across France.

Rivier struggled for much of her childhood from a debilitating disability that caused her joints to swell and her limbs to shrink. She could hardly stand with the help of crutches, according to the Vatican Congregation for the Causes of Saints. Her health problems also hindered her ability to enter religious life, but Rivier persevered and helped to educate unemployed women in her parish before the founding of her congregation.

Within a few decades of Rivier’s death in 1838, the Sisters of the Presentation of Mary spread to Canada and the United States. Today the sisters are present on five continents.

Mother Maria Francesca of Jesus was a 19th-century missionary foundress who crossed the Atlantic Ocean seven times by boat to establish an order of Capuchin sisters in Uruguay, Argentina, and Brazil.

The Italian religious sister, originally from the province of Turin, was born Anna Maria Rubatto in 1844. She lost her mother at the age of four and her father when she was 19 years old.

She worked as a servant and cultivated a deep spirituality, visiting a church daily to pray. But she did not discover her vocation until she was 40 years old.

One day when she was leaving a church, she heard the cries of a construction worker who had been injured by a stone that fell from the scaffolding onto his head. Maria helped to wash and treat his wounds. She discovered that the building he had been working on was a convent. The Capuchin friar who was overseeing its construction invited her to join as a founding member and then the first superior of the Institute of the Capuchin Tertiary Sisters of Loano.

Within just seven years, Mother Maria found herself traveling to South America to found new houses as her religious order grew. Today, the sisters are known as the Capuchin Sisters of Mother Rubatto and are present in Eritrea, Ethiopia, Kenya, and other countries across South America, Europe, and Africa.

Maria Domenica Mantovani served as the first general superior of the Institute of the Little Sisters of the Holy Family, which she co-founded to serve the poor, orphaned, and the sick.

At the age of 24, she made a vow of virginity on the Solemnity of the Immaculate Conception of the Blessed Virgin Mary in front of a statue of Our Lady of Lourdes in her hometown of Castelletto di Brenzone in northern Italy.

She co-founded the Little Sisters of the Holy Family in 1892, at the age of 29, along with Blessed Giuseppe Nascimbeni, a priest who had been her spiritual guide since she was 15 years old.

Serving as the order’s superior general for more than 40 years, Mantovani wrote the constitutions of the order and oversaw the opening of numerous convents.

By the time she died in 1934, the Little Sisters of the Holy Family had grown to have 1,200 sisters present in 150 convents in Italy and abroad.

Mother Maria of Jesus founded the Capuchin Sisters of Immaculate Mary of Lourdes in Sicily in 1910.

Born in Palermo in 1852, Carolina Santocanale felt a desire to consecrate herself to God from an early age despite her father’s wishes. Under the spiritual guidance of Father Mauro Venuti, she discerned to devote her life to works of charity for the poor rather than entering the cloister.

At the age of 32, she began to experience significant health problems. Severe pain in her legs led her to be bedridden for more than a year. After her illness, she embraced an even more radical Franciscan spirituality.

After making simple vows at the age of 39, she spent most of her free moments, day or night, in front of the tabernacle. She oversaw the establishment of an orphanage and a nursery school, and nurtured many vocations to the priesthood and consecrated life.

Today, Santocanale’s sisters are present in Albania, Brazil, Italy, and Madagascar. She wrote that the mission of her Capuchin sisters was “to be bread broken for the hunger and the life of our brothers and sisters, in the image of Mary Immaculate in the mystery of salvation.”