What can we learn from silent St. Joseph? 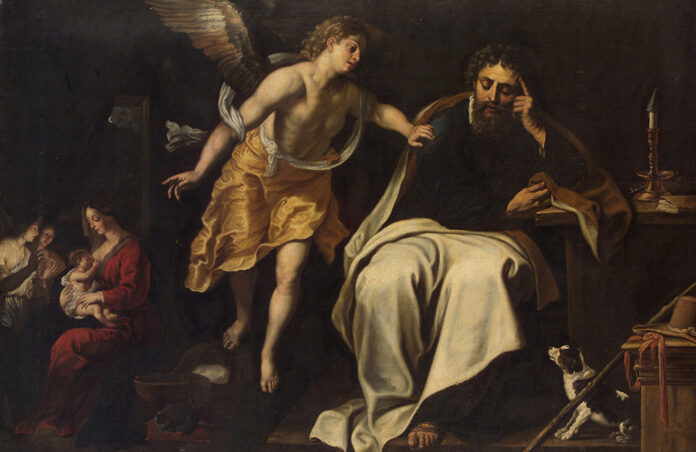 It seems like a paradox to say we can learn from St. Joseph, a man who does not have a single word attributed to him in the Scriptures, but the Church is currently spending a year doing just that. The secret to learning from St. Joseph is to look at his actions, not his words.

Pope Francis created this year, which started on December 8,2020, to commemorate the 150th anniversary of St. Joseph being declared the patron of the Universal Church by Pope Pius IX in 1870. To help you enter this celebration, this edition of the Denver Catholic contains articles about St. Joseph’s spiritual fatherhood, his role in salvation history and stories of people who strive to imitate St. Joseph’s virtues in their lives.

We also have decided to dedicate the 2021 Archbishop’s Catholic Appeal to highlighting St. Joseph’s virtues. We invite people to express their faith with action by donating to the largest annual fundraiser that results in touching the most lives in the Archdiocese of Denver.

So, what can we learn from silent St. Joseph? I would like to offer a starting point for your reflection by highlighting a few insights that Pope Francis shared about St. Joseph in his apostolic letter Patris Corde (A Father’s Heart), although they will by no means exhaust what can be said about him.

For me, my devotion to St. Joseph did not really begin until I became a bishop. My mother’s name was Josephine, and she had a strong devotion to her namesake, but for me it was the duty of watching over a flock as a bishop that sparked a deeper connection with the man who helped protect and raise Jesus. In prayer I turned to Joseph to learn what it means to be entrusted by the Father to be a father for the faithful I shepherd.

Pope Francis speaks of Joseph’s trust and obedience as leading him to accept God’s plan as better than what he had in mind. Though he was afraid at times, “God’s will, his history and his plan were at work” (PC, 2).

Whether it was the decision to marry the Blessed Mother, packing up the family and fleeing to Egypt in the night, or responding to the angel’s call to return to Israel once Herod had died, Joseph trusted in the Lord’s guidance. When we are fearful, we should ask St. Joseph to teach us to trust in the Father’s loving care and provision for us.

In addition to his trust, Joseph was obedient. At every crucial decision point of God’s plan to save us, “Joseph declared his own ‘fiat,’ like those of Mary at the Annunciation and Jesus in the Garden of Gethsemane,” Pope Francis notes (PC, 3). And St. Joseph imparted that obedience to Jesus as well, such that “Even at the most difficult moment of his life, in Gethsemane, Jesus chose to do the Father’s will rather than his own, becoming ‘obedient to death, even death on a cross’” (PC, 3).

You may discover inspiration in the pages of the special Year of St. Joseph commemorative magazine for your own life as you contemplate St. Joseph’s actions. The Holy Father observes that “Joseph was the man chosen by God to guide the beginnings of the history of redemption. He was the true ‘miracle’ by which God saves the child and his mother. God acted by trusting in Joseph’s creative courage” to find a place for Mary to give birth, to provide for the family in Egypt and certainly numerous other instances the Scriptures did not record (Cf. PC, 4).

I hope you use the articles in the magazine to contemplate how St. Joseph was “creatively courageous” in the face of difficulty, as Pope Francis puts it. This beautiful tribute magazine can be read and reread throughout this year. Let it sit on your coffee table and encourage others to pick it up, read, pray and reflect with it.

Please also consider putting your own courage into action, like St. Joseph, and make a gift to the Archbishop’s Catholic Appeal that introduces Christ into the lives of the people of northern Colorado. The appeal feeds those who are hungry for both food and spiritual nourishment. It also shelters those in need of a safe place to sleep like our Holy Family sought protection in Bethlehem. Your gift funds more than 40 ministries that help secure our faith for the future and keep Christ’s message alive with action.

And so, in this year dedicated to St. Joseph, we look to him for his example of trust, obedience, creative courage, and protection in our own times. St. Joseph, pray for us!

Put your faith in action. Visit give.archden.org to make a gift today.