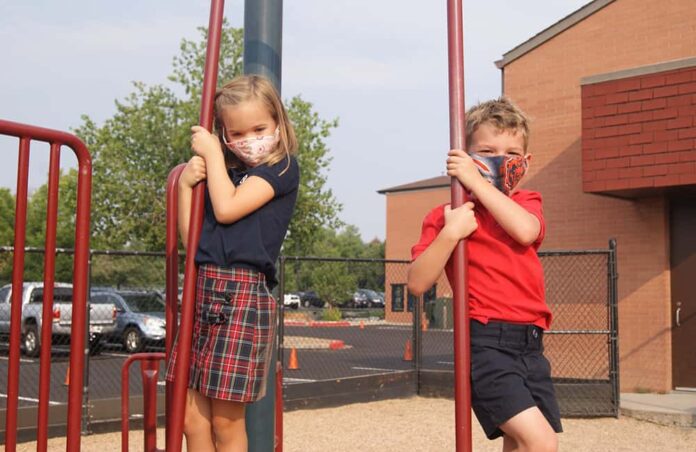 By Carol Nesbitt and Abriana Chilelli

While most school districts in Colorado were closed to in-person learning this fall, the Catholic schools in the Archdiocese of Denver were 100 percent open. Not only were they open, but they did so without the huge COVID-19 outbreaks that some had predicted.

School leaders worked incredibly hard over the summer months to establish countless “layers of protection” to keep their students and staff as safe as possible – from reconfiguring classrooms, establishing robust cleaning routines, creating cohorts and even redesigning what walking down the hallways, recess and lunch would look like for students.  It has been a “herculean” effort to be sure, but critical to the welfare of the 36 schools’ more than 9,000 students and 900 staff members.

As a result of the hard work put forth by school leaders and staff members, as well as their creative solutions to COVID challenges, our Catholic schools saw less than one percent of students and less than four percent of the staff members test positive over the entire fall semester – numbers that are less than overall positivity rate for children and the general population. Furthermore, in nearly all positive cases at Catholic schools, those who contracted the virus did so from other family members or outside of the school day. That speaks volumes about the protocols in place that prevented outside confirmed cases from being spread within the school.

NWEA Assessments and scholars at Brown University estimated that the average student could begin fall 2020 having lost as much as a third of the expected progress from the 2019-2020 school year. However, the nimble, whatever-it-takes mentality and action of Catholic school educators led to tremendous results.

At the start of this school year, six percent more of the Archdiocese of Denver’s Catholic school students tested proficient in reading and math than last year, so instead of falling behind, our Catholic school teachers were able to help students actually improve. Expectations were not lowered and the teaching and learning happening in our Catholic schools remained strong even amid spring school closures.

However, Catholic school leaders in the archdiocese knew they could not rely on long-term virtual learning because we believe that education in schools is best done in-person: people were made to be known and seen by each other, being with one another incarnationally, in imitation of our Lord.

“Nothing can fully replace the goodness, beauty and educational experience of being physically together as a school community,” said Superintendent Elias Moo. “Our belief in in-person learning stems also from what we know is best for students’ mental health and ongoing learning.”

The mental health impacts of distance learning are devastating: the CDC reported that emergency room mental health visits for 5- to 17-year-olds increased from March to October 2020 by 44 percent.

In addition, schools across the country that are still in remote learning are seeing record numbers of student absences given the difficulty and challenges that come with distance learning.

In-person learning much better for students

The evidence is clear that in-person learning has profoundly better effects on student learning than ongoing virtual learning provided by schools. Fairfax County, Va., reported from March through November 2020, the number of students earning failing grades in at least two classes increased by an astounding 83 percent.

Though the number of students failing two or more classes in local public districts across Colorado is not as publicly reported, more locally, Douglas County made a stunning announcement in November. The district announced they were lowering the bar for passing classes due to ongoing hybrid and remote learning. That lowering of the bar will have ongoing effects on students’ mastery of material and progression through coursework.

In addition, the nationwide data on attendance and failing marks have substantially more of an effect on low-performing students, families for whom English is not their first language, and students from lower socioeconomic status. Opening schools for in-person learning in the Archdiocese of Denver clearly became not only an issue of serving all students but especially the most vulnerable populations, as the Church is always called to do.

Parents understand even more profoundly this year the real value of in-person learning for their children – socially, emotionally, and academically. Archdiocese of Denver Catholic schools saw an influx of over 650 new students in the fall, with many public school families opting to switch to Catholic schools due to their public districts remaining in remote or hybrid learning. According to Chalkbeat Colorado, a recent survey showed that 65 percent of parents whose students are in remote learning say their children are learning less online compared to in-person learning and are worried that they’re falling behind.

Our Catholic schools happily welcomed as many new families as they could. It is their hope that these families are now also witnessing the real gift of a Catholic education and the deep formation of their children, providing a true vision of the world and one that forms the whole child.