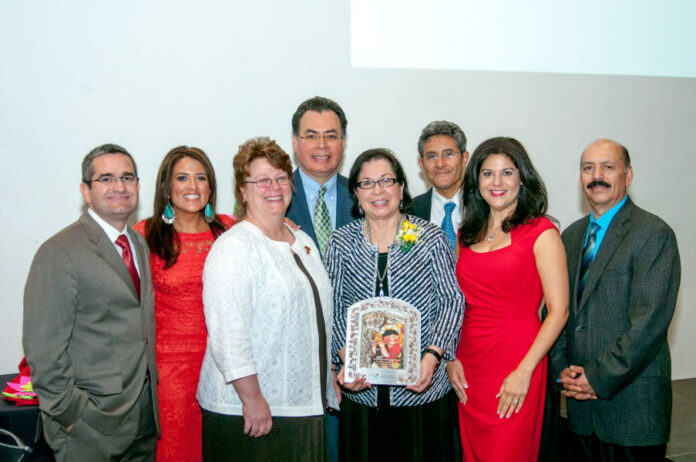 Some 300 supporters and friends of the archdiocese’s Hispanic Ministry gathered May 17 at the Denver Art Museum for the Las Madrinas Tribute 10th anniversary. The event recognized six individuals and organizations that personify the spirit of “La Madrina” (godmother) through their personal dedication to Centro San Juan Diego, and specifically to Centro’s Bienestar Family Services.

Among the honorees was Sister Alicia Cuarón, 75, who founded Bienestar in 2004 to provide social and economic help for Spanish-speaking immigrants in Denver. Last year the program served more than 6,000 individuals. Also recognized were: The Madrina (godmother) Award was presented to Gracie Casias, business development officer for the Heritage Title Company, a female role model demonstrating untiring dedication to the community. The Corazón (heart) Award was accepted by Franciscan Sister Rita Cammack, on behalf of the Sisters of St. Francis, for the order’s love and dedication to further the growth of Bienestar. The Estrella (star) Award was given to Mario M. Carrera, chief revenue officer of Entravision Communications Corporation, for shining brightly for his outstanding volunteerism. The Rebozo (shawl) Award was bestowed on Roberto Rey, multicultural outreach director for AARP of Colorado, for providing personal and financial resources in support of Bienestar programs.

Special guest was Francisco Romero, an international artist and native of Juarez, Chihuahua, Mexico, and creator of “Lupita” artwork for Las Madrinas. Festivities also included a luncheon and an auction, with former Denver Bronco Reggie River as auctioneer, to raise funds for Bienestar. To view a photo album and video from the tribute, visit http://photos.blacktie-colorado.com/event/10th-annual-las-madrinas-tribute.