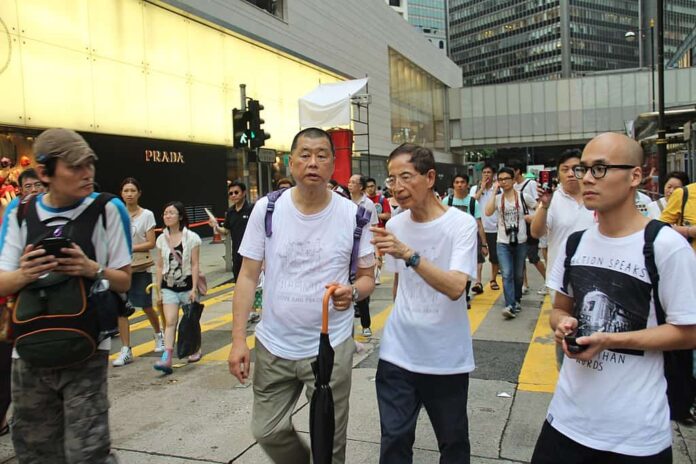 In mid-May, Chinese leader Xi Jinping unveiled a plan to bypass Hong Kong’s legislature and impose draconian new “national security” laws on the former British colony. Putatively intended to defend Hong Kong from “secessionists,” “terrorists,” and “foreign influence,” these new measures are in fact designed to curb the brave men and women of Hong Kong’s vibrant pro-democracy movement, who have been aggravating the Beijing totalitarians for a long time. With the world distracted by the Wuhan virus (which the Chinese government’s clumsiness and prevarication did much to globalize), the ever-more-brutal Xi Jinping regime evidently thinks that this is the moment to crack down even harder on those in Hong Kong who cherish freedom and try to defend it.

This latest display of Beijing’s intent to enforce communist power in Hong Kong coincides with the most recent persecution of my friend, Jimmy Lai.

Jimmy and I have only met once. But I have long felt a kinship with this fellow-Catholic, a convert who first put his considerable wealth to work in support of important Catholic activities and who is now risking all in support of the pro-democracy movement in Kong Kong. Arrested in February, and then again in April, Jimmy Lai has been charged with helping organize and lead “unauthorized protests.” That he was in the front ranks of pro-democracy demonstrations is true. The question is, why do the Chinese communists regard peaceful protest in support of freedoms Beijing solemnly promised to protect as treasonous?

In late May, the thugs in Beijing tightened the ratchet of repression another notch: Jimmy Lai’s case was transferred to a court that could give the 72-year old a five-year sentence, or even consecutive sentences. But what else could be expected from a regime that was already trying to bankrupt Lai’s pro-democracy newspaper, Apple Daily, by pressuring both Chinese and international firms to stop buying advertising space there? Shamefully, far too many have kowtowed to those pressures, and a recent Wall Street Journal op-ed article reported that Apple Daily is now cut off from 65% of the Hong Kong advertising market. Meanwhile, Beijing, while trying to reassure the business community that everything will be just fine, warns business leaders (as well as diplomats and journalists) not to “join the anti-China forces in stigmatizing or demonizing” the new national security laws.

The Xi Jinping regime may be less stable than it wants the world to think it is. Secure regimes do not increase repression, as Beijing has done for several years now. Moreover, labeling all criticism of the Xi Jinping government as “anti-China” is not the play a regime confident about its legitimacy and stability would make. Such tactics seem clumsy; they bespeak sweaty nervousness, not calm self-assurance.

The attempt to break the Hong Kong democracy movement is one facet of a broader campaign of repression that has not spared Chinese religious communities on the mainland. One million Muslim Uyghurs remain penned in Xinjiang concentration camps, where they are being “educated.” Protestant house churches are under constant threat. And repressive measures continue to be taken against Catholics and their churches, despite the almost two-year old (and still secret) agreement between the Holy See and Beijing. That agreement, which gave the Chinese communist party a lead role in the nomination of bishops, looks ever more like one in which the Vatican gave away a great deal in return for hollow promises; Chinese Catholics who do not toe the party line as the Chinese communist party defines that line are still persecuted. The effects of this sorry affair on the Church’s evangelical mission in the China of the future – hopefully, a post-communist China – will not be positive.

Around the world, voices have been raised in support of Hong Kong’s brave pro-democracy demonstrators. Has the Holy See’s voice been heard? If so, I missed it and so did many others. Are strong representations in favor of religious freedom and other basic human rights being made by Vatican officials behind the scenes in Beijing and Rome? One might hope so. But if the Holy See’s current China policy is in fact a reprise of its failed Ostpolitik in central and eastern Europe during the 1970s, those representations are more likely tepid and wholly ineffectual.

With one of its most courageous Catholic sons now in the dock and facing what could be life-threatening imprisonment, the Vatican now faces a defining choice: Jimmy Lai or Xi Jinping?