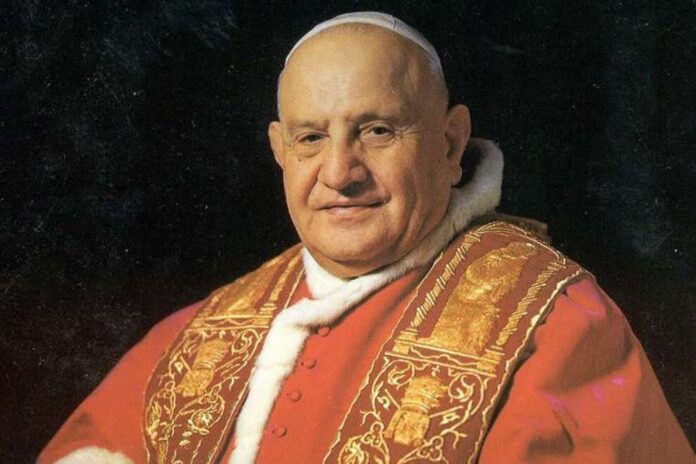 ROME. With his liturgical memorial (October 11) falling on the fourth full day of the Special Synod for Amazonia, which sometimes seems bent on recycling every tried-and-failed nostrum from 1970s, it was inevitable that certain portside Catholic commentators would continue their effort to spin Pope St. John XXIII into a smiley-face, chubby Italian grandpa whose approach to the future of the Church was somewhat Maoist: “Let a thousand flowers bloom!”

If, however, the spinners had bothered to read the excerpt from Pope John’s opening address to Vatican II in the Divine Office for October 11, they might have been given pause.  For after some opening words of thanks to divine providence for having brought the Council to its solemn opening, the Pope had this to say:

“[The] critical issues, the thorny problems that wait upon man’s solution, have remained the same for almost 20 centuries. Why? Because the whole of history and of life hinges on the person of Jesus Christ….”

He then continued: “In these days….it is more obvious than ever before that the Lord’s truth is eternal.  Human ideologies change. Successive generations give rise to varying errors, and these often vanish as quickly as they came, like mist before the sun. The Church has always opposed these errors, and often condemned them with the utmost severity. Today, however, Christ’s Bride prefers the balm of mercy to the arm of severity. She believes that, present needs are best served by explaining more fully the purport of her doctrines, rather than by publishing condemnations….

“The great desire, therefore, of the Catholic Church in raising aloft at this Council the torch of truth is to show herself to the world as the loving mother of all mankind; gentle, patient, and full of tenderness and sympathy for her separated children. To the human race oppressed by so many difficulties, she says what Peter once said to the poor man who begged an alms: “Silver and gold I have none; but what I have, that I give thee. In the name of Jesus Christ of Nazareth, arise and walk. (Acts 3:6).”

Insofar as it’s remembered today, Pope John’s epic opening address to the Council is cited for the brush-back pitch it threw at the “prophets of gloom” who see nothing but ruin in modernity. That was certainly said — and meant. But there was far, far more to Gaudet Mater Ecclesia [Mother Church Rejoices] than ecclesiastical smackdown. As I explain in a pivotal section of my new book, The Irony of Modern Catholic History (Basic Books), Gaudet Mater Ecclesia was actually the first trumpet call summoning the Church to what Pope St. John Paul II would call the “New Evangelization” — the recovery of the Church’s core identity as a communion of disciples in mission, dedicated to converting the world. And as those excerpts from Gaudet Mater Ecclesia in the Divine Office make clear, John XXIII knew that that evangelical mission would only meet the needs of the day if it were anchored in the ancient, abiding truths bequeathed to the Church by divine revelation: truths manifested in the life and teaching of the Lord Jesus himself, and developed through the Church’s doctrinal reflection as guided by the Holy Spirit.

To be sure, John XXIII understood that evangelization was not an exercise in logic-chopping; most modern men and women were unlikely to be converted by the proclamation of syllogistic proofs. So the Church needed a contemporary way of expressing ancient truths. But as Pope John insisted in Gaudet Mater Ecclesia, those truths must be expressed “with the same meaning and the same judgment” (in some translations, “…with the same meaning and import”). That was a direct quote from St. Vincent of Lerins, a 5th-century monk who wrote an important treatise on what we know as the “development of doctrine.” And it stands in sharp contrast to, and critique of, the bogus image of John XXIII as a pope unconcerned with doctrinal solidity and continuity.

It took the Church more than 20 years to grasp the full meaning of Gaudet Mater Ecclesia, as I also explain in The Irony of Modern Catholic History. Today, however, the living parts of the Catholic Church are those committed to a truth-centered evangelization that manifests itself in compassionate witness as well as compelling proposal. The dying parts of the Church are those still misreading John XXIII.