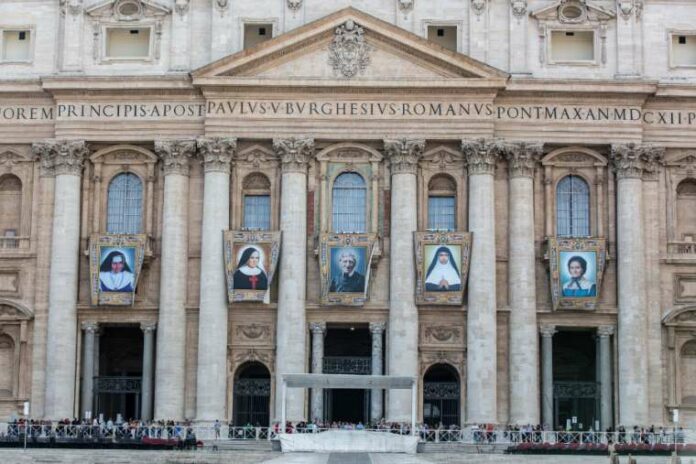 Mother Mariam Thresia (1876-1926) was an Indian mystic and founder of the Congregation of the Holy Family. Her prayer life was characterized by frequent ecstasies in which she would sometimes levitate above the ground. In 1909, Thresia received the stigmata, after which she also suffered from demonic attacks.

Mother Thresia cared for the poor, sick, and dying in Kerala, visiting those with leprosy and measles. She also preached to the poor and the rich alike the importance of happy, healthy families to uplift all of society.  In 1914 Thresia founded the Congregation of the Holy Family, which has grown to have 176 houses around the world with 1,500 professed sisters.

Pope Francis recognized the second miracle attributed Mother Thresia in February. A grandmother of a dying child had a relic of Mariam Thresia and asked the nurse — a sister belonging to the Congregation of the Holy Family — to place the relic on the child’s heart and pray. From that moment forward, the young boy began to breathe normally and was cured. This 19th century Swiss laywoman and stigmatist dedicated her life to prayer and service to her parish community without marrying or entering a religious community. As a Third Order Franciscan, she lived a simple life as a dressmaker and carried out a lay apostolate as a catechist.

When Bays was diagnosed with advanced cancer in 1853, she prayed to the Virgin Mary to be able to suffer with Jesus rather than to be healed. However, on the day that Bl. Pius IX proclaimed the Dogma of the Immaculate Conception, Sept. 8, 1854, she was miraculously healed. Pius made the proclamation on Marguerite’s 39th birthday.

“From that moment on, after Marguerite was healed of her illness in a completely inexplicable way, she proclaimed the Passion of the Lord, because every Friday she had these moments of suffering in which there was blood and the stigmata, the very pain of the Passion,” Father Carlo Calloni, the postulator for Bays’ canonization cause, told EWTN’s Vaticano.

Blessed Marguerite died on the feast of the Sacred Heart of Jesus in 1879 at the age of 63. After her death the Vatican approved a miracle attributed to her intercession in which a two-year-old child was completely healed after being run over by an 1,800-pound tractor wheel. She was beatified by St. John Paul II in 1995. Giuseppina Vannini is a 19th century religious sister from Rome known for founding the congregation of the Daughters of St. Camillus dedicated to serving the sick and suffering. She is the first Roman woman to be canonized in more than 400 years, according to ACI Stampa.

Vannini spent much of her childhood in an orphanage near St. Peter’s Square after losing her father when she was four, and her mother when she was seven. She grew up among the Daughters of Charity sisters, who ran the orphanage. On the day of her first communion, young Giuseppina felt that she was called to a religious vocation.

This desire was not realized until 1892 when she was 33 because she was rejected by the Daughters of Charity after her novitiate due to her poor health.

Despite her own health problems, Vannini went on to find the Daughters of St. Camillus, whose charism is to serve the sick, even at the risk of their own lives. However, she did not live to see the congregation fully recognized by the Vatican. She died at the age of 51 in 1911.

Today the Daughters of St. Camillus have grown to 800 sisters in 22 countries. The Giuseppina Vannini Hospital in Rome is named in her honor. This Brazilian sister was nominated twice for the Nobel Peace Prize. Born as Maria Rita Lopes in 1914 in Salvador de Bahia, Lopes began inviting the elderly and those in need into her home at the age of 16. Two years later she joined the Missionary Sisters of the Immaculate Conception of the Mother of God.

In 1959, she founded the Charitable Works Foundation of Sister Dulce, which grew into largest charitable organization in Brazil providing healthcare, welfare, and education services. Today the foundation includes Roma teaching hospital in Bahia and the Santo Antonio Educational Center which provides free education to 800 children living in extreme poverty.

Sister Dulce died in 1992 after 30 years of respiratory illness. After her body was found to be incorrupt, Sister Dulce was beatified in 2011 and was selected as one of the patrons of World Youth Day in Krakow as a model of charity.

She is now the first Brazilian-born female saint. St. John Henry Newman is the most famous English theologian in modern times. Born the son of a London banker, he was baptized in the Anglican church, began studies in Oxford at the age of 16, and was ordained an Anglican priest.

After joining the Oxford Movement, he sought to recover Catholic aspects within the Church of England. However, in 1845, putting aside his academic career, he converted to Catholicism and subsequently spent the last 40 years of his life as a parish priest in Birmingham. There, he cared for the poor and wrote works that have had a major impact on Catholic theology, including in the Second Vatican Council. Leo XIII made him a cardinal, but he never became a bishop.

In 2010, Pope Benedict XVI beatified Newman in London. Benedict noted Newman’s emphasis on the vital place of revealed religion in civilized society, but also praised his pastoral zeal for the sick, the poor, the bereaved, and those in prison. Saint John Henry Newman’s liturgical feast is October 9.

John Henry Newman has been called the “absent Father of Vatican II” because his writings on conscience, religious liberty, Scripture, the vocation of lay people, the relation of Church and State, and other topics were extremely influential in the shaping of the Council’s documents. Although Newman was not always understood or appreciated, he steadfastly preached the Good News by word and example.