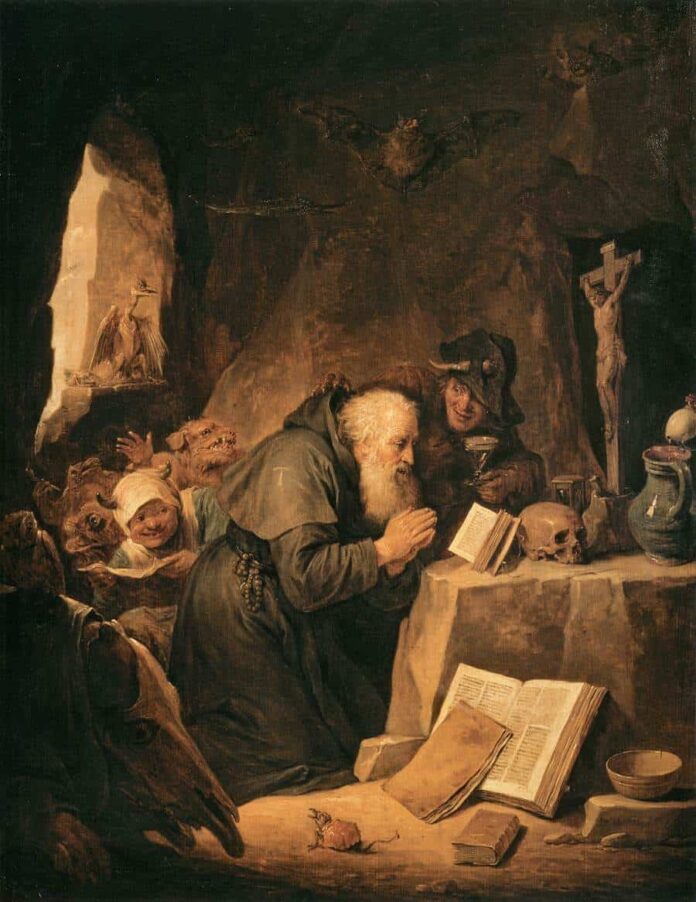 The fact that we don’t do what we want but instead do what we hate is a problem as old as our first parents. Yet, we can interpret temptation either as that which is always keeping us away from God or as the very vehicle to grow closer to him.

The Desert Fathers believed it to be a necessary vehicle: “Whoever has not experienced temptation cannot enter the Kingdom of Heaven,” St. Anthony of the Desert used to say. They saw the fight against these evil enticements as a step to love God in a deeper way.

Here’s how these radical followers of Christ – who fled to the Egyptian desert during the 3rd to 5th centuries to live a form of daily martyrdom in a land where being a Christian was no longer a risk – survived the strongest enticements of the flesh and the devil, as they sought to live out the Gospel and grow in perfection.

The sayings, teachings, maxims and stories they left behind, compiled and known as the Sayings of the Desert Fathers, show that a combination of three things: self-awareness, prayer and practicality, are key to battling the strongest disordered passions.

“The early monks understood that temptations often come in the form of thoughts. We become attracted and have fantasies, whether that be in petty things, bodily appetites or social interactions,” explained Father Columba Stewart, O.S.B., expert on early monasticism, scholar and director of the Hill Museum and Manuscript Library at St. John’s University in Collegeville, Minn.

The first disposition they considered to be key, was self-awareness, “knowing what happens in our minds and hearts… how to recognize [bad thoughts] before we actually do a sinful action,” he said.

After this base, which requires continuous self-examination and attention to the inner impulses of the heart, the importance of prayer and practicality follow.

A hermit of the desert said to a young monk suffering from strong temptations, “This is the way to be strong: when temptations start to speak in your mind do not answer them but get up, pray, do penance, and say, ‘Son of God, have mercy upon me.’”

Prayer is not isolated from action. The hermit tells him to “get up,” “do penance” and “pray.”

Practicality can take on different forms, such as going in the opposite direction of the temptation or seeking help from another, Father Stewart pointed out.

“For example, when you’re angry with someone… thoughts of anger start emerging, and you replay in your imagination what made you angry. Then that turns into a mental video of how you’re going to get revenge. This is when self-awareness comes in and you realize that the thoughts you’re having are inappropriate,” Father Stewart said.

A first practical action would be to step away instead of going to find that person, he continued. “Then to use your mind and imagination to instead remember the times when your relationship [with that person] was better or think about the future and how great it will be when this passes.”

Also, this “get up” practicality consists in bringing to light one’s sins or temptations to someone else and not fighting alone.

“A common exhortation, attributed to many different monks, was that the Enemy, the devil, rejoices in nothing so much as unmanifested thoughts… A sin which is hidden begins to multiply,” Father Stewart wrote in an article.

He then explained that “If the devil was delighted by a monk’s self-imposed isolation, surely this was because the opposite of isolation, encounter with another, was the way to salvation.”

According to Father Stewart, this understanding led the Fathers to break from “the illusion of self-sufficiency, a pose which encourages self-absorption,” and find spiritual fathers.

“The desert tradition is universally insistent upon the young monk’s need for a discerning elder,” he explained. “The basic insight of the desert… was that one cannot grow towards perfection through isolated, solitary effort: grace is mediated through one’s neighbor, especially one’s abba [spiritual father].”

The way these early hermits fought temptations is one of many treasures that Father Stewart says they left behind. In fact, he encourages readers to look at the Sayings of the Desert Fathers as a source that is still “amazingly relevant.”

“[The Sayings of the Desert Fathers] have been very popular sources of wisdom and inspiration throughout history,” he said. “What sets [them] apart… is that they speak from and to experience rather than text or theory.”

“The tradition of Christian wisdom is great,” he concluded. “People only need to know where to find it.”