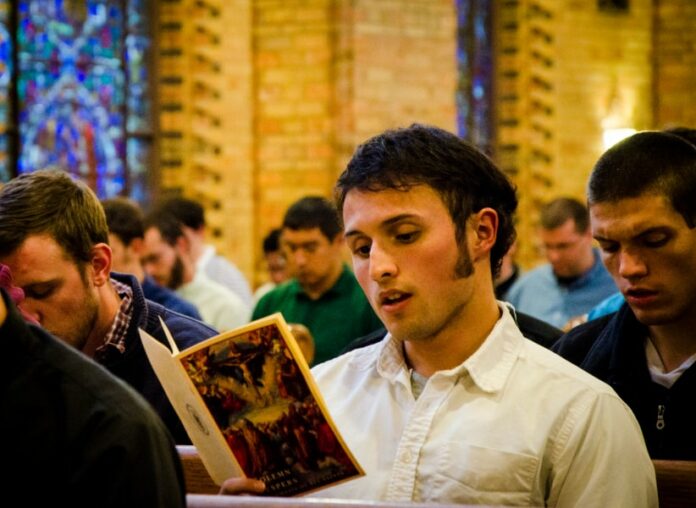 Every January, about 25 men who have entered seminary at St. John Vianney are sent out “two-by-two” for a month to be immersed in the lives and service to the poor.

The last of these men returned to Denver Feb. 5 from their various immersion destinations with a desire to continue to serve the poor.

Father Jim Thermos, director of the seminarians’ first year called spirituality year (SY), said, “The seminarians return from Christmas break ready to put their deepened life-in-Christ into action. They are sent out two-by-two to serve the poor in various missions for 30 days. This outpouring of self, and learning to trust in the loving providence of the Father, is critical. Without it, the seminarian would become turned-in on himself and his life for the remainder of the spirituality year would become quite tedious.”

Two of the SY men shared their experiences after visiting confidential locations to serve the needy. Samuel Mota-Martinez and Tyler Frohlich are both seminarians studying for the Diocese of Helena, Mont.

Q: How did you feel before going on immersion? Were you worried or scared?

Frohlich: I wasn’t focused on immersion, because we’re told all year to be present where we’re at, the Lord gave me the grace to be where I was, even in the three days prior to leaving.
Mota-Martinez: In my situation, I felt really open, ready to go. I had a good Christmas break: it was long enough for me to get refreshed and I was ready to get to seminary to see what immersion was going to be about.

Q: Relate one really moving or touching experience you had.

Frohlich: I had a man come up to me in the middle of the day and said “I need to talk to you.” This is right about at the midway point when we had established relationships with the people, and we went to a room, and he broke down into tears in front of me and told me that, first of all, he was contemplating suicide, and he also told me,“I haven’t been living my life well or properly. I had an experience today of the Lord and I really want to change.” It was amazing just to be able to be an instrument of God in a very small way, a very humble way, knowing your unworthiness to do that, but that he chose you, and that it quite possibly saved or changed someone’s life.
Mota-Martinez: So this past month I got to take care of the elderly. I brought this back to prayer, and I realized that I did have a poverty in that I didn’t get to know my own grandparents, but during this month, the Lord gave me, like, 40 grandparents, who were loving me, and I got to love back. With that there are just a bunch of little situations, whether it was feeding them or walking them from the chapel to the meal room, or simply in being with them, because some of them have varied mental or physical limitations, and some of them were of Navajo culture and heritage, some of them didn’t even speak English at all.

Q: What’s your biggest take away from immersion? How has it changed you, deepened your vocation, or strengthened your relationship with Christ?

Frohlich: I know that liberal society and Christianity says “don’t judge, don’t judge,” and they mean different things in different ways, but I was able to see the depth of the lack of our ability to judge. We have no right or place to judge anyone in any place or situation, because we don’t know where they’ve been. By sight, by talking to someone, just by surface level conversation, you cannot judge. That is only God’s duty and his job.
Mota-Martinez: I definitely reflected a lot about how I need and desire both prayer and work. Both of those things feed each other: the prayer gives the work meaning, and the work allows the prayer expression. It allows you to bring that forth. So really realizing for me that I desire that prayer time and also that I need and desire that work to express and to serve other people, and that I can’t just pray and not do anything, or stop praying and think, “I’ll just work, work, work.” The necessity and balance that you need both of those two pillars was a big takeaway, because during that time I was able to experience days where we didn’t pray and we just worked or days where I just prayed and wasn’t able to work.