Saint Joseph: A vision in a dream 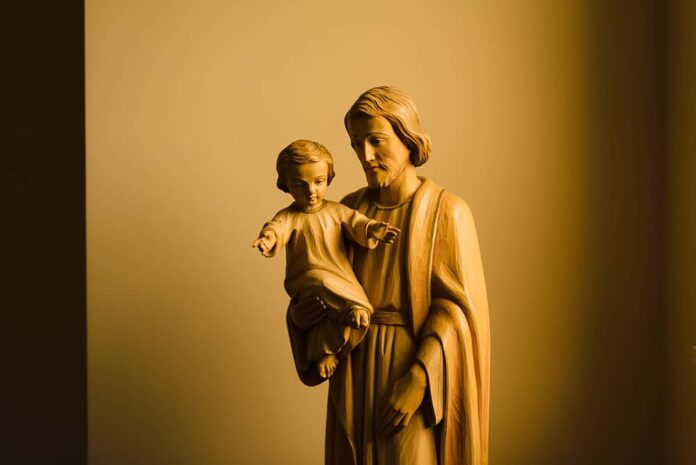 While preaching to the crowds on the day of Pentecost, St. Peter quoted the prophet Joel: “I will pour out of my Spirit upon all flesh: and your sons and your daughters shall prophesy, and your young men shall see visions, and your old men shall dream dreams.”

There is a striking inversion of expectations in this prophecy because, in human experience, it is old men whose hopes for this world are past and who, according to nature, have the disinterested clarity to see visions and young men, with their lives ahead of them and little understanding of suffering or failure, who dream dreams. Like his namesake of the Old Testament, St. Joseph was a dreamer and he has in devotional tradition overwhelmingly been portrayed as an old man. Certainly, there is no mention made of him as still living in the Gospels after Jesus’s discovery in the temple at the age of 12. By the time of Our Lord’s public ministry, his life seems to be in the past. On the Cross, the Saviour entrusts his mother to the Beloved Disciple, which he would not have done if Joseph lived.

Not only does St. Joseph share a name and a propensity for prophetic dreams with the great patriarch of Genesis, but he is also compelled by injustice to sojourn in Egypt. The patriarch, however, seems to have been a silver-tonged man of affairs more prone to speak too much than too little. St. Joseph does not speak once in all the New Testament. His cares must have been enormous. He was the heir to the throne of David living the life of a humble carpenter; betrothed to the very tabernacle of God and deterred by holy fear from contracting his marriage to her; driven by the indifferent bureaucracy of imperial power to a perilous journey with his heavily pregnant wife; able from poverty only to fulfill the minimum of his ritual duty; driven by the bloodthirsty envy of a tyrant to take his family into exile and compelled by a prudent suspicion of the tyrant’s heirs to live away from his home for the rest of his life.  And yet St. Joseph dreamed dreams. He endured the glory and the burden of guarding the Redeemer in obscurity. For three days, he suffered the trauma of seemingly failing in that greatest of all responsibilities and then he died without seeing the glory of his foster child’s miracles and preaching.

Joseph the Patriarch was a young man, the second youngest of his brethren. St. Joseph was an old man, and yet, he dreamed dreams. They say if you want to make God laugh, tell him your plans. Perhaps, in order for those who have travelled far and who might imagine they have learned much, to hear God’s plans it is necessary, before all things, like St. Joseph, to remain silent.  I once knew two Franciscan novices. One had studied much before he entered the order and was quick to share his learning. His brothers had no objection and were pleased to hear his observations. The other was a simpler man who had walked a quieter path and seldom volunteered his views. When he did speak, it was most often under obedience, but when he did, an awed and reverent silence descended upon the brethren and every word was weighed with care by the other friars. As St. Jerome said of the Prophet Obadiah, whose book is shortest in the Old Testament, “his prophecy is shortest of any in number of words but yields to none in the sublimity of its mysteries.”

Every event in our lives is willed or permitted by God. Often we complain that God is not answering our prayers, but all that we have known, every moment of our lives, is his answer. Too often we cannot hear him because we are telling him our plans. “Thy father and I have sought thee sorrowing,” Mary tells her 12-year-old son in the Temple in Jerusalem. “How is it that you sought me? Did you not know that I must be about my father’s business?” he replied. Like the astounded doctors of the law in the Temple, we each must learn that sitting at the feet of Jesus and listening is, as the Lord Himself has told us, the one thing necessary. Like St. Joseph, we must (as Luke tells us three times he did in chapter two of his Gospel) ‘wonder’ at the words and actions of Christ.

St. Ignatius of Antioch, one of the most ancient of all the fathers of the Church, tells us that God “has revealed himself in his Son Jesus Christ, who is his Word issuing from the silence and who won the complete approval of him who sent him.” And in another place that “the virginity of Mary was hidden from the prince of this world, as was also her childbearing, and the death of the Lord; three mysteries of renown, which were wrought in silence by God.” St. Joseph was present for all three of those mysteries. The first he acknowledged by his faithful protection of the Virgin Mother, the second he accomplished in the poverty of the stable in Bethlehem and the last he beheld as he greeted his foster son triumphant over sin and death in the shattered gates of Hell.

These are dark times in the land and the sea. Like St. Joseph, the model of artisans and the chaste guardian of the virgin, we must seek the Lord sorrowing, but with wonder and in docile silence. The grace of Christ purifies the visions of the young and enkindles the dreams of the old. “The world grows old, but the Church is ever young. She can, in any time, at her Lord’s will, ‘inherit the Gentiles, and inhabit the desolate cities.’”