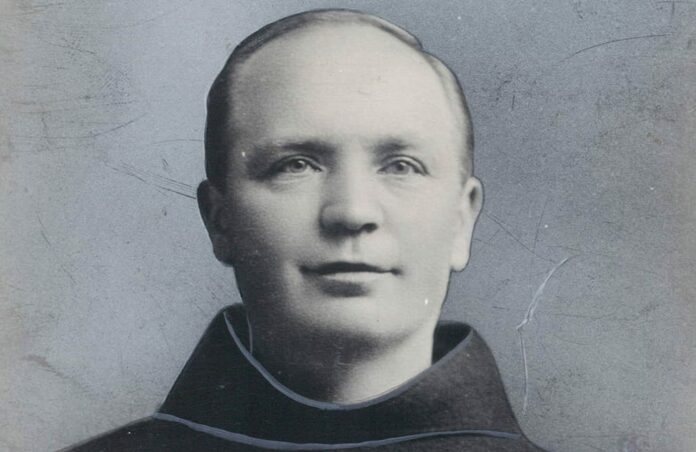 Father Leo Heinrichs woke up the morning of Feb. 23, 1908, and prepared for the 6 a.m. Mass at St. Elizabeth of Hungary Parish in Denver. While he normally said the 8 a.m. Mass, Father Leo asked his vicar, Father Wulstan Workman, if he would switch on account of a meeting he had later that morning.

It was the last Mass the Franciscan priest ever celebrated. While distributing Holy Communion, an Italian immigrant named Giuseppe Alia approached the altar rail, and knelt down to receive the Host given him by Father Leo. However, upon receiving it, Alia spit the Host out into his hand and threw it in the face of Father Leo. As the Host fell to the ground, Alia pulled a revolver hidden in his pocket and put a bullet in Father Leo’s heart.

The front page of the February 27, 1908 edition of the Denver Catholic Register described Father Leo’s final moments: “Father Leo reeled and sank to the floor of the sanctuary, striving with the instinct of the priest to collect the consecrated particles which had been scattered from the chalice. Father Wulstan, being called, was just In time to administer the last sacraments when he expired, his last act being to point mutely to the fallen contents of the ciborium.”

With his dying breaths, Father Leo recovered two fallen hosts which he placed in the ciborium he held; he then placed the ciborium on the step of the Virgin Mary’s altar which lay a few feet away. Just a week prior, Father Leo had told members of the Marian society Sodality of Our Lady, “If I had my choice of a place where I would die, I would choose to die at the feet of the Blessed Virgin.” An eyewitness to the murder said that indeed, Father Leo died at the foot of the Blessed Virgin’s altar, with a peaceful smile spread about his face.

Father Leo’s love of the Virgin Mary was second only to his love of the Eucharist, as exemplified by his dying acts. On Nov. 9, 1916, the Denver Catholic Register, reprinting an article from The Catholic Columbian, wrote of Father Leo’s Eucharistic devotion: “How he loved the Blessed Sacrament! Although he was dying from the moment the bullet, sharpened by the brutal murderer for its deadly work, pierced his heart, his whole concern was to save from desecration the consecrated species scattered on the ground around him. Curiosity to know why he had an enemy, the roar of rage coming from a congregation frenzied at the crime — not these things turned him from solicitude for the dignity of the great Sacrament he had in his keeping.”

Alia, Father Leo’s assassin, confessed that he was an anarchist. He had planned to kill several other priests that day, and he showed no remorse for his actions. Despite a request for leniency on behalf of the Colorado Franciscan friars, Alia was tried and sentenced to death by hanging – a show of justice in those days. Reportedly, Alia’s last words were, “Death to the priests!”

Father Wulstan, in reflecting on how his life was spared due to an innocent switch with Father Leo between Masses, later told the Denver Post, “I would have been killed and he would be alive now. There is one way to solve the affair that I can see, and that is that God chose the better man.”

Father Leo was informally declared a martyr in the days that followed. His funeral Mass was attended by thousands of people, including the Colorado governor. Father Leo was originally a priest of the St. Bonaventure Friary in Paterson. N.J., and though he’d only been assigned to Denver for five months at the time of his death, he was a pastor who was well-loved by his parishioners. His body was transferred back to the friary in Paterson and he was buried at the Holy Sepulchre Roman Catholic Cemetery in Totowa. His gravesite is frequented by pilgrims who visit from all around.

After his death, the coroner discovered, quite by accident, more indications of Father Leo’s holiness and heroism. It was reported that Father Leo wrapped his arms and waist with leather straps studded with rows of iron hooks, and the extensive scarring indicated he had done so for a long time. While this sort of practice seems a bit extreme by today’s standards, various priests and religious throughout Church history have done similar practices as a form of asceticism to both keep sinful desires at bay and to share in the sufferings the Lord endured on our behalf. It was likely that Father Leo did this as a form of penance, perhaps to tame his quick temper. Furthermore, when his fellow friars entered his room after his death, they found not a bed but a wooden door upon which Father Leo slept.

In the 1920s, The Franciscan order opened an investigation into Father Leo’s heroic virtues. His cause for canonization was submitted, and in 1938, the process for his beatification was authorized. One parish in Paterson was so sure of Father Leo’s canonization that they were to name it in his honor. However, for various reasons, his cause has since stalled, but it remains open. Perhaps today, in 2021, asking for Father Leo’s intercession to live a courageous and reverent faith, with a deep love for the Eucharist, is all the more germane and necessary.

As we remember Father Leo on this day, the 113th anniversary of the day of his death, when he used his dying breaths to protect the source and summit of the Catholic faith, may he serve as an inspiration to us all, and may we continue to pray that he will one day be counted among the communion of saints. As that same Nov. 9, 1916 issue of the Denver Catholic Register rightly noted: “Well then, does his life tell us and his death convince us that he merits to dwell forever as a saint of the Church near the tabernacle where he stood an angelic sentinel and a pious minister.”