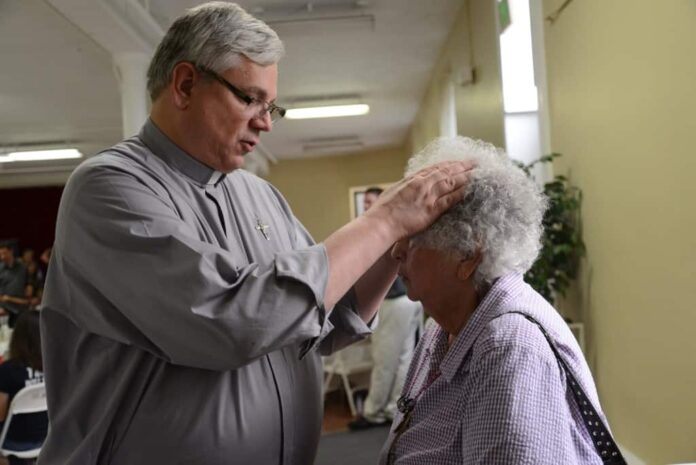 Mother Teresa liked ice cream, and chocolate, and though she wasn’t much of a joke teller, she had a great sense of humor. These insights into Blessed Mother Teresa of Calcutta, the person, came from Missionaries of Charity Father Brian Kolodiejchuk—her friend for 20 years and postulator for the cause for her canonization the last 15 years.

Father Kolodiejchuk, director of the Mother Teresa Center in Tijuana, Mexico, celebrated Mass at St. Joseph Church June 4 followed by a talk, organized by Christ in the City, to some 130 guests in the banquet hall of the church. It was his first visit to Denver since attending World Youth Day in 1993.

“Some people think saints are on the clouds and hovering over but no, no, no,” Father Kolodiejchuk told the Denver Catholic Register. “Maybe some were … but no (Mother was) really down to earth.

“(She was) human, very practical, very wise,” he added.

During his talk, Father Kolodiejchuk encouraged the Christ in the City missionaries, who serve and evangelize the poor on the streets of Denver and Colorado Springs, to be inspired in their work by Mother Teresa, their patron.

“Mother was convinced of God’s personal and tender love for her,” he said. “Her life was an endeavor to return love for love.”

Father Kolodiejchuk first met Mother Teresa in 1976 when attending a Mass in Rome with the Missionaries of Charity Sisters, which she had founded and his sister had joined. She encouraged him to join her order of contemplative brothers, which he did, and ultimately he became the first father in the priestly order she founded in 1984.

Following her death Sept. 5, 1997, Pope John Paul II waived the normal five-year waiting period and allowed for immediate opening of her canonization cause. In his work as postulator since 1999, Father Kolodiejchuk, a native of Canada, has traveled the world collecting information for the cause.

“The first phase is the so-called diocesan phase,” he explained of the first two years of the process. “It’s gathering all the information, testimony and documents relevant to showing someone’s holiness, or otherwise.”

He lived in Calcutta those two years and collected, along with the team, approximately 35,000 pages of evidence that filled 85 volumes. The second phase involved writing the study, known as the positio.

“That’s what you present to the theologians,” he said “They have to read it and say whether this shows heroic virtue.”

The positio did indeed demonstrate Mother Teresa’s heroic virtue and she was beatified Oct. 19, 2003 by now-St. Pope John Paul II.

“We had the first miracle that happened in India, and now we’re waiting for the second one,” Father Kolodiejchuk said. “We’ve been studying some cases, but so far there’s not been one solid enough.”

They had an “excellent slam-dunk case” at one point, he said.

“One of the family members was praying to Padre Pio at the same time,” Father Kolodiejchuk explained. “The intercession has to be clear. So it can be Jesus and Mary any time, all the time; but for the cause, you need only that one person.”

In that particular case it was unclear whether the miracle could be attributed to the intercession of Mother Teresa or Padre Pio. Most people don’t know that, he said.

“Usually once you have the second miracle it could be one year or two, depends,” he continued. “It could even be faster.”

Typically the work of the miracle is not as complicated, relative to the positio.

“We gather all the information, documents, witnesses, sonograms, X-rays, things like that and present the case,” he said. “The positio for Mother was 5,000 pages, and miracles are only several hundred pages.”

There is a second miracle currently being researched.

Father Kolodiejchuk has no doubt Mother Teresa was a saint.

“One of the striking things is that she was so supernatural, radiating holiness,” he said. “People after just one meeting, one look in her eyes—it would change people’s lives.”

She radiated that holiness and faith in her service to countless poorest of the poor for more than 60 years. Dealing with such extreme poverty can take its toll but “Mother wanted to be joyful,” he said.

There are currently 15 missionaries serving with Christ in the City. For more information, visit www.ChristintheCityMissionaries.com.