Pilgrim updates: From the Alps 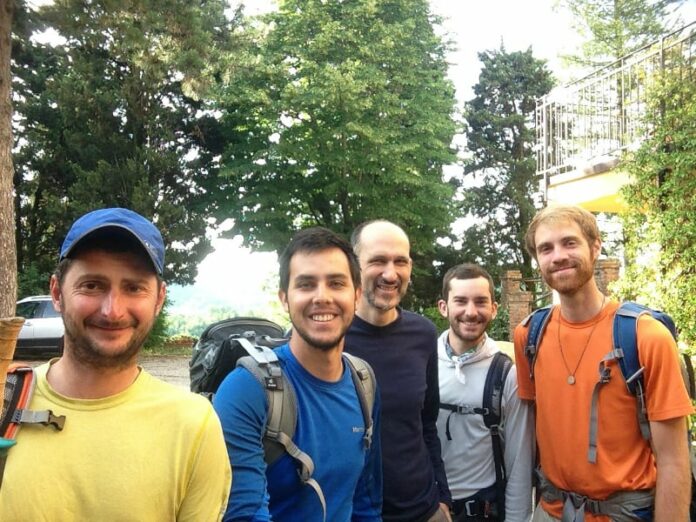 Mendicant pilgrim Ann Sieben is leading four men across Europe on foot for World Youth Day. Every week, we are updating you on their progress via their pictures and journal entries, which they are sending us throughout their journey. You can read the introductory post here.

From the Apennines to the Alps, we’ve upped our pace this week. Even the Italians say, “There’s no much to see in the Po Valley”, However, everything is [something] to the rest of the country which, as we are discovering, is full of history and artifacts both secular and religious.

Even in the Po, we encountered such as Bologna and Mantua, noted even by Shakespeare. Focused on our destination, we crossed the Valley–14 kilometers—in three days, walking as much as a marathon a day. Such distances would have seemed impossible on day one, but such distances are now standard; our bodies are conditioned.

Kilometers add up and people we meet are impressed to know that we started in Rome and are incredulous to hear that it has all been on foot.

We are increasingly independent during the day, often walking alone for extended periods. Sometimes we cross paths during the day, and we certainly reunite during the evening at our pre-determined meeting place. We’re not a tour group, we’re independent pilgrims. As a result, our experiences are varied and individual at times, and yet share common themes ranging from receiving hospitality from strangers to finding places to swim during the day. The individuality provides for spontaneity.

The image of the Alps–at first viewed through a haze, continued to grow steadily and is now beneath our feet. We’ve entered the foothills and the next phase of our journey.

Another themes of our trip has been unity in the midst of diversity. For example, we’e visited three shrines this week and each honored Mary, but but each under a different title and with different traditions. Certainly the members of our group are diverse. We come from different parts of the USA and the world, bringing with us different personalities and perspectives. We are commonly asked where we all met or how we came together, yet it’s simply a matter of having a common goal. Another example of pilgrim magic.

Seven hundred and eighty two kilometers later, and nearly a month of living together, it’s hard to believe that our group gathered for the first time at the Vatican on day one.