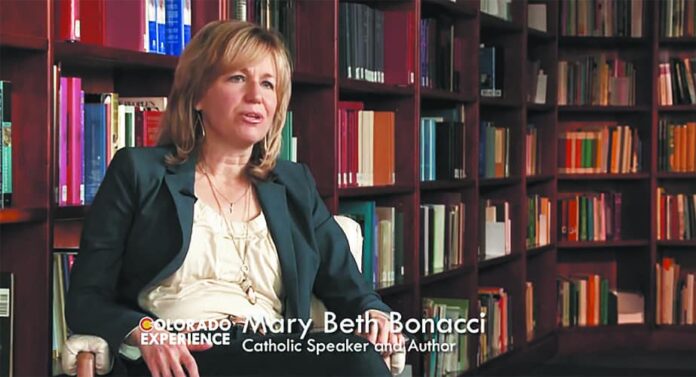 Rocky Mountain PBS, Channel 6, will air a 30-minute documentary titled “Pope John Paul II” on an episode of its “Colorado Experience” program 7 p.m. Oct. 23. Mary Beth Bonacci, a Denver native who addressed 75,000 teenagers from the main stage at Mile High Stadium, just hours before the arrival of John Paul II, served as a key narrator for the program that highlights the pontiff’s 1993 visit to Denver for World Youth Day.

The Denver Catholic Register spoke with Bonacci last week about her World Youth Day experience and how St. John Paul II has influenced her life.

Q: How did John Paul II’s visit impact your life, your faith?
A: This visit was a continuation: he started impacting my life before, when I was a senior in college and we had a speaker series on theology of the body, and this was very shortly after the talks were delivered, so it was not the ‘phemon’ that it is now. It just rocked my world, because I thought: I’ve been living this because it’s the rules and I don’t want to go to hell, but there’s a whole dimension here—this is about love and about finding real love and this is something that I want to live now and share with the world. So I immersed myself in it and started speaking which I never expected to be a big thing but it got big.

Q: How did John Paul II’s visit impact the wider community in Denver?
A: There was a spiritual dimension on the natural level: people saw him, people were moved; I mean the man just radiated love. If you lived in Denver, you couldn’t help but see him, it was all over the news, it was all over everything. You can’t throw a rock in the Catholic Church without finding somebody who found their priestly vocation at World Youth Day in Denver, or whose life was changed one way or another. It just sealed the Catholic renaissance in Denver that had already begun. It really took off after that.

Q: You’ve described John Paul II as “the first pope rock star.” What do you mean by that?
A: I guess it probably started with Elvis or the Beatles, when you have the reaction to rock stars where people scream, there are big crowds. I’d never heard anything about these enormous gatherings of screaming crowds for an old guy who teaches unpopular teachings! And that’s exactly what we saw. You’re in this stadium full of people screaming, crying—I was crying—at the vicar of Christ. It’s a reaction to holiness, true holiness on a level we can only dream of.

Q: If you could use only three words to describe St. John Paul II, what would they be?
A: Holy. Charismatic. Interpersonal. He combined those three things: the charisma of someone who attracts crowds but … he had that gift of giving you the sense you were the only person in the room.