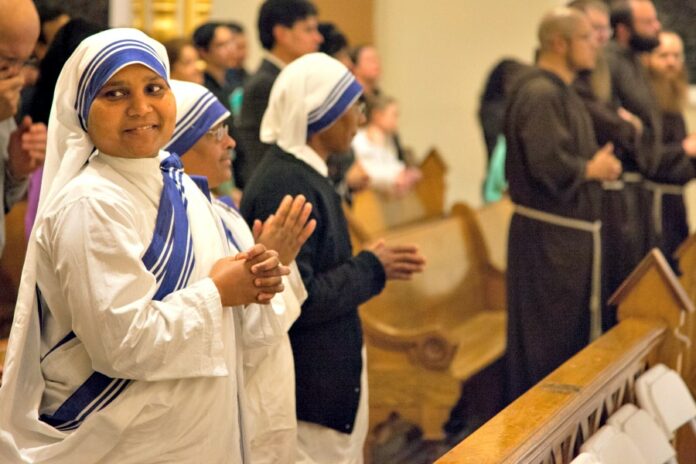 The gift Mother Teresa sent to Colorado 25 years ago keeps on giving.

A handful of meek and humble Missionaries of Charity nuns continue to pray, comfort and care for the poorest of the poor in Denver after their mother sent them in the 1990s.

“I have a gift for you,” Mother Teresa told a crowd in Denver’s old McNichols Sports Arena May 20, 1989. “I will give you my sisters and I hope that, together, we are going to do something beautiful for God.”

Much to then-Archbishop J. Francis Stafford’s surprise, the small nun from Calcutta, India announced to thousands during a prayer service she wanted to send nuns from the order she founded to serve in the Archdiocese of Denver.

Her gift was the story of the day for the media that heavily covered Mother Teresa’s Denver visit and seemingly-spontaneous announcement.

Reflecting back, Sister Damascene and the three other nuns running A Gift of Mary Shelter adjoining St. Joseph Church suggest there was no mystery to Mother Teresa’s decision—it was God’s will.

“It’s as God wants,” Sister Damascene, the superior, told the Denver Catholic inside the shelter. “We are missionaries so we are sent. We cannot choose where we want to go. There is no questioning.”

The first group of sisters sent to Denver in Jan. 1990 moved into the Seton House, which had been renovated and dedicated for housing AIDS patients. Mother Teresa received honors for making use of the former Cathedral High School and convent and founding the house.

By 2003, the order had cared for more than 490 patients. But improved treatment for AIDS and changing city requirements on the Seton House forced the sisters to relocate.

“We had to stop that work because they had better medication and the city requirement was more and more (patients), but we were getting less and less patients,” Sister Damascene explained.

They received permission to run a shelter for single, homeless women and began to look for a smaller space.

“That’s why we came over here,” she said of the shelter on Fox Street and 6th Avenue, where the sisters also live.

In Jan. 1990, the shelter began and the sisters open the doors at night to some 100 women over the course of a year.

“We do talk with them and pray with them and listen to them,” Sister Damascene said. “Many people here do change their life. They find much peace and prayer. There are times when they want to come back to the sacraments.”

During the day the sisters, who wear the order’s recognizable blue-boarded white sari, visit families and nursing home residents. They also visit the downtown jail weekly.

“When we go to the prison, we bring and present Jesus in the blessed sacrament. It’s also an opportunity for prayer,” she shared. “The most important thing is to be with them, to listen to them—sometimes they have a lot of sufferings and want to share things.”

The sisters thank God for the poor’s acceptance of their service. For in each person they serve, they see Christ.

“If we are not doing it for Jesus, if we are not seeing Jesus in them, we would not be able to do the work,” Sister Damascene said. “What we doing to them, we are doing it to Jesus.”

The sisters describe it as joy-filled work with occasional struggles only overcome by prayer.

“Prayer is important because otherwise we would not be able to do the work that we do,” the superior said. “The prayer gives us the strength.”

The sisters spend more than four hours of their day in prayer, waking up before 5 a.m. for morning prayer and Mass. They also say prayers with the shelter residents, spend 30 minutes of spiritual reading, dedicate one hour to eucharistic adoration and conclude with the Liturgy of the Hour’s evening and night prayer.

The sisters’ work and pray in the shelter that is one of 760 houses run by the order’s 5,100 nuns across the world. The future is unknown, but the Denver sisters are content with surrendering to wherever God sends them.

“We are happy. I am happy,” Sister Damascene said.

By the Numbers
4 Missionaries of Charity sisters care for 8 homeless women at night at the Gift of Mary Shelter
5,100 professed sisters in the world run 760 houses in 139 countries