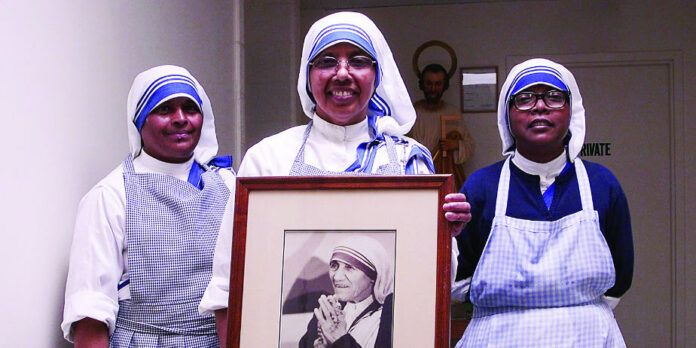 The entire world will celebrate Sept. 4, the day of the canonization of Mother Teresa of Calcutta. But for the over 5,000 members of the Missionaries of Charity, the daughters of the soon-to-be canonized Teresa of Calcutta, the day will be one of special graces and spiritual renewal.

The local superior of the small community of the Missionaries of Charity here in Denver spoke to the Denver Catholic about own personal memories of Mother Teresa, and what the canonization means to her community.

Denver Catholic: Do you have any personal memories of Mother Teresa?

Sister Damascene: Often Mother spoke to us that we are called to be holy. If you learn to pray, I am not afraid for you. She told us if you don’t want to be holy, you better pack up and go. You came happily and I will help you to go home happily. I don’t need numbers. Mother was very loving and very firm with us.

In 1992, I had a little, precious time with Mother. Myself and five other sisters travelled with Mother in a private plane from San Francisco to Vancouver to open a community there. We had a good time together in the plane, talking and having dinner together. There was a big welcome when we arrived in the airport. The Vicar General, many priests, co-workers, security and many others took us to the new convent where we were going to stay. It was a Loreto Convent that had closed down. Mother was very happy because she used to belong to the Loreto convent before beginning the Missionaries of Charity.

After everyone had left, Mother started to settle in with us. It was already night when we arrived in the house, and until 2 a.m. Mother worked so hard with us rearranging things and getting the house ready for the opening the following day. The Loreto sisters had left all of their household things. She told the priests to take away whatever was not necessary for us, including the microwave, deep freezer, washing machine, dryer, etc… Mother wanted us to live a simple life like the poor.

The beauty I saw in her was that she was one with us doing all the things. She was not just telling us what to do, but she herself was doing many things. At that time, it was only a year after my final vows. I was blessed to be with Mother for the opening of the house. I had all my formation in the Mother House, where Mother lived. Every day I prayed in the chapel with her. She gave us many instructions.

DC: What does her canonization mean to your community?

SD: This is a very historic and grace-filled time in the life of our society. It is a cause of great joy to the world as well—for both Christian believers and non-believers alike—for the language of love has touched the hearts of all who are hungry for God’s love in their lives.

For us, as her daughters, it is particularly a time of many graces, and of renewal and a re-discovery of our own Missionaries of Charity vocation, in its beauty and fruitfulness in today’s world. It is a great blessing for many of us who lived with her, gave us many examples and guidance in our formation. She lived what she preached. Now we have an intercessor in heaven.

DC: What is it about Mother Teresa that makes her loved by the whole world?

SD: Mother Teresa was a missionary of peace, a missionary of love. Her life was one of simplicity, joy, holiness, single-mindedness and bringing peace to everyone with whom she came into contact. She saw Christ in each person. “She brought God to the world, and the world to God,” many have expressed. “I came here Godless, senseless, empty, and now I go out full of God. I realize that God really loves us.” Mother always began her speeches: “God so loved the world, that he gave his only son.” She lived the Gospel by performing the works of mercy. That is what touched the world.

She said that we have the Gospel in our hands. On five fingers she would say, “You-did-it-to-me.” Then on the other hand, “I will, I want, with God’s blessing, be holy.”

DC: How has Mother touched the lives of the women you minister to?

SD: The women who come to the house experience an atmosphere of peace and tranquility. They enjoy the company of our volunteers, who make lots of sacrifices top bring evening meals and share their life. Many of the residents who are not practicing the faith, by the time they leave the house they have learned how to pray the rosary, the Divine Mercy Chaplet, and they want to pray. Many have changed their lives and they appreciate the time they spent here. They are very grateful to God and to the sisters. Some of them love to come back again and again.

DC: Could you tell me a little about the current growth of the order? Is it growing? How many novices do you have?

Our community is growing and we do have vocations. Our formation houses are in India, Rome, Africa, Philippines and San Francisco. In May 2016, 37 sisters took their first vows. Five were from the San Francisco novitiate. The current number of novices in San Francisco is 20.

DC: Any from Denver?

SD: The Archdiocese of Denver has three vocations. Sister Fatima is currently serving in Toluca, Mexico, as an aspirant mistress. She is from the Annunciation Parish in Denver. Sister Brittany is from Colorado Springs (Father Jason Keas’ sister). She is a postulant in Mexico City. Sister Catherine is aspirant in Chicago, and she is from Centennial.