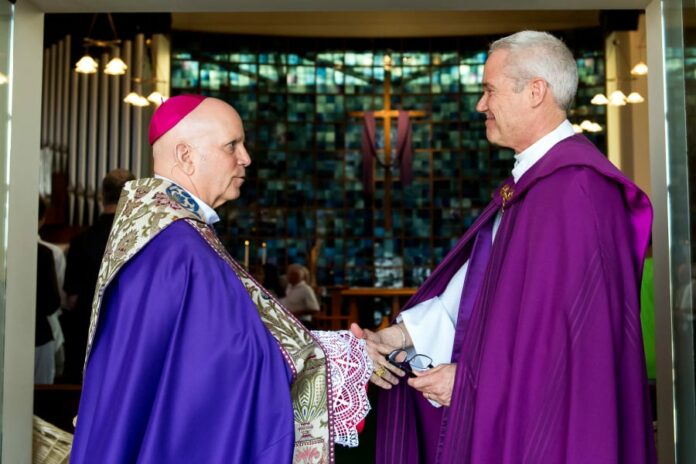 The service of common prayer that gathered two bishops, some 50 clergy and more than 400 Lutheran and Catholic laity at Bethany Lutheran Church in Cherry Hills Village March 19 was both beautiful and momentous.

“As Lutherans and Catholics, we are making history—history of a good kind,” Lutheran Bishop James Gonia told the congregation, drawing applause.

The liturgy, which was presided by Bishop Gonia and Catholic Archbishop Samuel Aquila, marked the 500th anniversary of the Protestant Reformation, which historians trace back to German monk Martin Luther, and focused on the ecumenical dialogue and healing that has taken place between the two churches the last 50 years.

Countless numbers of such services are taking place across the country and around the world, noted Bishop Gonia.

“We gather to commemorate in remembrance, in thanksgiving and confession, and in common witness and commitment,” Archbishop Aquila said at the start of the liturgy.

At a similar service in the Lutheran Cathedral of Lund, Sweden, last October, Pope Francis prayed “that together we may bring [God’s] word to the world, which so greatly needs his tender love and mercy.”

The local service included soaring hymns led by choristers from both churches, intercessory prayers in a variety of languages, a commitment to the aims of the 2013 Lutheran-Roman Catholic document “From Conflict to Communion,” the Our Father prayer, and a reading from the Gospel of John on the vine and the branches.

In the Gospel reading (Jn 15:1-5), Christ stresses the importance of Divine Grace in uniting the Christian to Christ.

“The only one who can bring union among the Christian churches is Christ,” Archbishop Aquila said in his homily. “Open your heart to him who is our Lord and who unites us here today. May we come to know the truth of his words: ‘Whoever remains in me and I in him will bear much fruit.’”

In his sermon, Bishop Gonia said that as he looked over the congregation he couldn’t tell who was Lutheran and who was Catholic.

“Today, we remember in joy and thanksgiving the truth of our unity and our connectivity as two particular branches of this one [Christian] vine—branches we have named Lutheran and Catholic,” he said. “After centuries of division and rhetoric that was anything but Christ-like, in these past 50 years in particular, our two church bodies have made incredible strides toward recognizing the one life we share in Jesus.”

Although his own father converted from Catholicism to his mother’s Lutheranism, his dad’s family remained Catholic, Bishop Gonia said. Speaking to the experience of many, he added that the growing unity between the two churches is made more profound by the realization that it offers “healing and hope for a new day for our very families.”

Shirley Vargo, who worships at Trinity Lutheran Church in Boulder, was among those attending the prayer service. Vargo told the Denver Catholic she grew up attending Lutheran schools but ultimately graduated from a Catholic college.

“I’m delighted at how over the years Catholics and Lutherans have come together; it brings such joy to my heart,” she said. “I wanted to contribute to that witnessing to each other.”

Cathy Grue, a recent transplant from Great Britain, is a Catholic who is active with ecumenism through the Focolare movement.

“This is the first time I’ve been to an ecumenical service here in Denver,” she said. “I was very moved. You felt a genuine relationship of mutual love between the churches. That’s what really matters. The theologians will work out the rest of our unity, but there has to be mutual love and it was really there between the two bishops.”