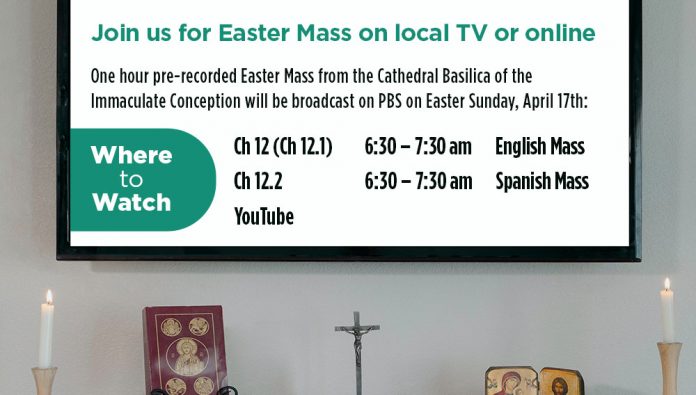 Reminder: viewing a TV or online Mass does not fulfill the Sunday or Holy Day obligation, but is intended to be a spiritual resource for those who have a “serious” or “grave” reason that excuses them from fulfilling the obligation. For those who are healthy and able to attend in-person, a list of parishes in the Archdiocese can be found here: https://archden.org/parish-locator/.

The Archdiocese of Denver began producing the Televised Mass in 1966 to help our homebound brothers and sisters to pray with the rest of the local church despite the fact that they can’t be physically present for Mass in a local parish. It has aired weekly since that time and is Denver’s longest running local television program.

The Televised Mass is a 30-minute liturgy, prerecorded in both English and Spanish, reaching 36,000 households throughout the state of Colorado, eastern Nebraska, and southern Wyoming.

This Sunday, for Easter Sunday, a special, one-hour long Mass will be broadcast on PBS, Channel 12, for our homebound brothers and sisters to be able to celebrate the resurrection of Jesus. These broadcasts, in English and Spanish, will take place at 6:30 a.m. on Channel 12.1 and 12.2. They can also be viewed on the Archdiocese’s YouTube channel.