Looking Back to the First Vatican Council 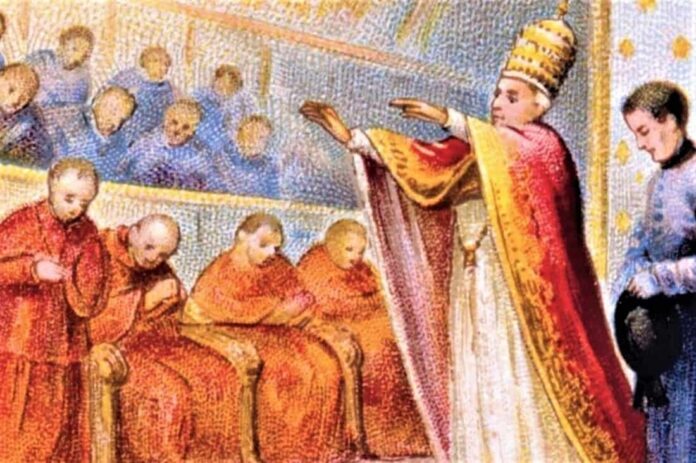 We often hear of the Second Vatican Council and its messy aftermath, but it would be hard to imagine this council without its predecessor, the First Vatican Council (1870-71). To summarize briefly, the first of these two councils held in St. Peter’s Basilica sought to confront the modern world by emphasizing the importance of faith and the authority of the Church, especially that of the Pope. The Second Vatican Council (1962-65) made a deliberate about face, seeking to engage the modern world in order to evangelize it, rather than anathematize it.

Looking back to the First Vatican Council can help us to understand the dynamics of the relationship between the Church and the modern world more clearly. Historian John O’Malley has written a concise and accessible overview of the Council and the history that led to it in his Vatican I: The Council and the Making of the Ultramontane Church (Harvard, 2018). O’Malley narrates the story dispassionately, but the reader does get the strong impression that he regrets the greater focus on the papacy that emerged from the 19th century and the pontificate of Pope Bl. Pius IX (reigned 1846-78), who called the Council. He is correct in pointing to this moment as a pivotal shift in how Catholics view the Church and the role of the papacy within it.

O’Malley does an excellent job of narrating the dynamics at play as the Church picked up the pieces from the devastation of the French Revolution and Napoleonic wars. The Church was in a fight for survival and was staking out its influence in a changed world. Bishops were split into two groups, the smaller of which wanted to embrace the new movements of democracy and science. They were dubbed “liberals” in the classic sense: open to the advancements of the modern world and the new political arrangement of Europe (not in the newer sense of doctrinal dissent). The larger group, the Ultramontanes, looked to the Pope as the source of stability in the midst of change and supported even greater authority for the Pope over the appointment of bishops, the liturgy, and the definition of dogma.

Several significant events led to the opening of the First Vatican Council in the 19th century. There was a remarkable resurgence of piety, including a number of Marian apparitions (Miraculous Medal, La Salette, and Lourdes), the re-founding of religious orders and monasteries, and the beginnings of the liturgical movement through the work of Dom Prosper Guéranger. Initially considered as open minded to the modern world, Pope Pius IX turned strongly against republicanism after he fled Rome in 1848, the year of revolutions. He issued the Syllabus of Errors in 1864, condemning a series of propositions, including “the Roman Pontiff can, and ought to, reconcile himself, and come to terms with progress, liberalism and modern civilization.” Although Pius was restored to the Papal States, with the unification of Italy underway it was only a matter of time before he the Papal States fell for good. In contrast to the Pope’s diminishing political power, papal authority was on full display with the proclamation of the Immaculate Conception in 1854, offering a test case for the Pope’s authority to solemnly proclaim a dogma of the faith.

The idea of convoking a Council was part of a larger effort to confront the modern ideology that reinterpreted faith as part of the evolution of history. The goal of the Council was to bolster faith and authority in the midst of growing secularism. It was unique in many ways: the first Council with no lay representation, the first to focus solely on expounding doctrine (rather than addressing heresy and other reform measures), was more orchestrated by the Pope and Roman Curia and represented the first truly worldwide gathering of bishops. Convened in 1870, it made two major pronouncements before it was cut short by the Franco-Prussian War. Its first dogmatic constitution, Dei Filius, boldly defended the reasonableness of faith and the compatibility of faith and reason. The main focus of the Council, however, came with dogmatic constitution on the Church of Christ, Pastor Aeternus, which affirmed Papal primacy and infallibility.  The Pope’s infallibility, however, was clearly defined to apply only in limited circumstances:

“We teach and define as a divinely revealed dogma that when the Roman Pontiff speaks EX CATHEDRA, that is, when, in the exercise of his office as shepherd and teacher of all Christians, in virtue of his supreme apostolic authority, he defines a doctrine concerning faith or morals to be held by the whole Church, he possesses, by the divine assistance promised to him in blessed Peter, that infallibility which the divine Redeemer willed his Church to enjoy in defining doctrine concerning faith or morals.”

The minority (liberal) faction strongly opposed this definition, warning that it was prone to misunderstanding, would alienate people from the Church, and overshadowed the authority of the local Church. Serious churchmen, such as Bishop Dupanloup and even Bl. John Henry Newman, questioned the necessity and timing of the proclamation. The vote was nearly unanimous in favor of the proclamation, however, as those opposed left before the vote. O’Malley helps the reader to see into the inner workings and maneuvering of the Council, including Pope Pius’ frustrations with the liberal faction. Looking to today, it helps to recognize that the Church always has contained varying viewpoints on the best manner to teach and conduct pastoral work. Although infighting can get messy at times, the Holy Spirit guides the Church despite and sometimes even through these machinations.

The Second Vatican Council continued the debates of the First, but decided in ways that favored the positions held by the previous minority: emphasizing the synodality and authority of bishops, expressing openness to the modern world and democracy, recommending adaptations to the liturgy, and embracing of modern scholarship, including historical study of the Bible. Together the two Vatican Councils give a balanced approach to engaging the modern world: preserving the faith and authority of the Church while also finding new ways to evangelize and serve. Nonetheless, O’Malley’s book provides hints that the Church may still be finding her way through the difficulties of the modern world, including working through differing approaches to the relationship of the Church and modernity.