His Church. Our Experience.
Subscribe
HomeLocalEvents‘Hate cannot drive out hate, only love can do that’: Coloradans march...
LocalEventsPro-Life

‘Hate cannot drive out hate, only love can do that’: Coloradans march to celebrate life 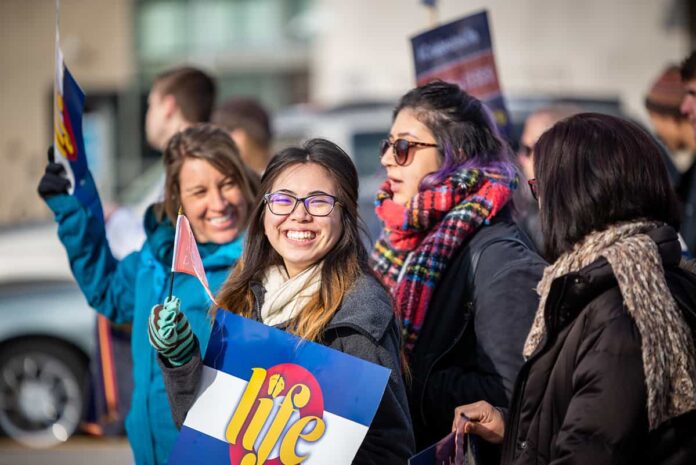 After a cold, snowy morning, thousands of Catholics from the Archdiocese of Denver gathered Jan. 12 to participate in the Celebrate Life March at the foot of the Colorado State Capitol — the place that first allowed for the legalization of abortion in the United States over 50 years ago — seeking a renewed respect of the most fundamental right: the right to life.

Calling to mind that Colorado became the first state to legalize abortion, David Bereit, the event’s emcee, and co-founder and former C.E.O. of 40 Days for Life, motivated the faithful to continue fighting to undo the evil that had begun in the same building that oversaw their gathering.

“Even though lives continue to be lost to this very day, we have seen, through the prayers and efforts of faithful people here in Denver, throughout Colorado and around the nation, the tide is turning for life,” he said, assuring that from the 2,200 abortion clinics that were present in the country at the pinnacle of the abortion industry in 1992, fewer than 600 remain. 79 percent of abortion centers closed their doors and went out of business, in great part due to the action and prayers of pro-life advocates.

“The abortion rate continues to drop… Americans self-identify as pro-life by the largest majority since Roe v. Wade. More pro-life laws have been passed in the States over these last three years than the previous 30 years before that… We realize that the days of Roe v. Wade are numbered. Abortion is going to end! Our work is not yet done, and that’s why we gather here,” Bereit continued. “What began here in this place, must end here in this place.”

This year’s Celebrate Life March also comes at an important time in the political realm of the State of Colorado, as the November midterm elections saw the defeat of legislators who were in support of key areas of Catholic teaching regarding the dignity of life.

The Archbishop of Denver Samuel J. Aquila urged the participants to be a light in the darkness in the public sphere to defend the dignity of life from conception until death.

“In this past midterm election, some of those lawmakers who were in support of the Church’s teaching in these key areas, failed to win their seats, which makes our task today of remaining vigilant and engaged all the more important. And it is you, the laity, who need to make your voices heard,” he said.

The prelate also called for the repeal of the death penalty in Colorado, which he assured was unnecessary; and, quoting Pope Francis, spoke against the idea that the Catholic Church must accept the many of these laws under the banner of progressivism.

“‘The internal consistency of our message, the message of the Church and of Christ, about the value of the human person, the Church cannot be expected to change her position in this question. It is not progressive to try to resolve problems by eliminating a human life.’ Our legislators need to hear those words. The Catholics in our pews need to hear those words. The media today would never report on those words of Pope Francis,” Archbishop Aquila assured.

The rally also counted with the presence of Elizabeth Felix, a college student and leader of Students for Life, who insisted that being pro-life meant being pro-woman, pro-man and pro-child; the McGarity family, who spoke for the dignity of children with Down Syndrome; and Elías Moo, the Superintendent of Catholic Schools of the Archdiocese of Denver.

In a bilingual speech in English and Spanish, Moo highlighted the importance of fighting for the right to life, especially for Christians.

“Our duty to our neighbors, even those who disagree with us, is to serve the common good of our society by defending the most vulnerable and fighting against the culture of death. For we’re fighting for the most fundamental right of all, the base of all other rights: the right to life,” he stated. “We love life because we love Christ.”

For the second year in a row, women from ENDOW (Education on the Nature and Dignity of Women), a Catholic apostolate that helps women come together and learn about their faith and dignity, set the pace of the March. But this year, the representatives were five young Hispanic ladies wearing their colorful quinceañera dresses.

“They are the champions of life. They are right in that age group where they can say, ‘This is what it means to be a woman, and this is how I can protect life starting now,’” said Marcela García López, Program Growth Coordinator for ENDOW. “Planned Parenthood and other organizations say that minorities need abortion because there is a lot of poverty or because of [the many] troubles that they go through. But actually, look at these girls. They can say yes, and they can challenge that.”

Among the many participants waving flags and banners, a group of medical students and doctors wearing white lab coats also sought to bring the message of life to the public.

“We have been trying to bring the concept of life to the medical campus for the past six or seven years, which is basically taken over by the culture of death with abortion teaching… through lectures and seminars to students on life issues, including Natural Family Planning” said Dr. Francisco La Rosa, Associate Professor in Pathology and Faculty Sponsor for the student group Catholic Medical Association at Anschutz Medical Campus.

As the crowd joyfully marched on the downtown streets of Denver, and was met with varied reactions from those observing, Martin Luther Jing Jr.’s words, quoted by Archbishop Aquila in his speech, seemed to resound with greater clarity: “Returning hate for hate multiplies hate, adding deeper darkness to a night already devoid of stars. Darkness cannot drive out darkness; only light can do that. Hate cannot drive out hate; only love can do that.”

Editor’s note: A previous version of this article misspelled Dr. Francisco La Rosa’s name. We apologize for the error.