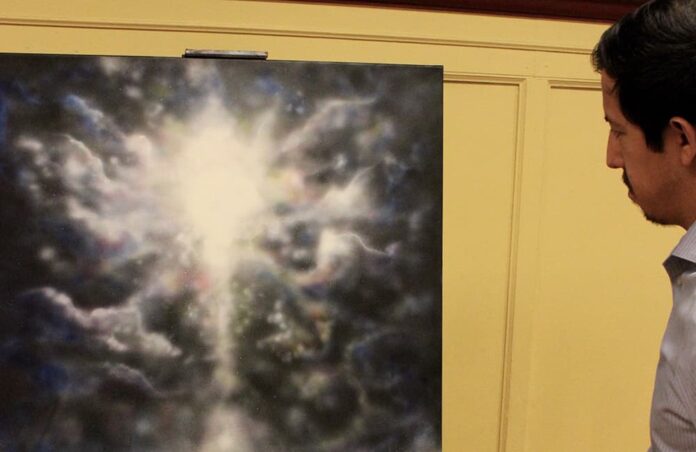 For someone who’s always been in love with art, it’s not surprising that Brett Lempe first encountered God through beauty. Lempe, a 25-year-old Colorado native, used his talent for art and new-found love of God to create a specifically pro-life art show after a planned show was cancelled because of Lempe’s pro-life views.

Lempe was “dried out with earthly things,” he said. “I was desperately craving God.”

Three years ago, while living in St. Louis, Mo., Lempe google searched for a church to visit and ended up at the Cathedral Basilica of Saint Louis.

“I was captivated by the beauty of the 40 million mosaic tiles,” he said.

Lempe is not exaggerating. This Cathedral is home to 41.5 million tiles that make up different mosaics around the sanctuary. Witnessing the beauty of this church is what sparked his conversion, he said, and was his first major attraction towards Catholicism.

Lempe continued on to become Catholic, then quit his job several months after joining the Church to dedicate himself completely to art. Most of his work post-conversion is religious art.

“I was a little bit shocked at first,” he said. “Something like me being against abortion or being pro-life would get a whole art show cancelled.”

Lempe decided to counter with his own art show, one that would be explicitly pro-life.

On Sept. 7, seven Catholic artists displayed work that gave life at the Knights of Columbus Hall in Denver.

“Catholicism lends itself to being life-giving,” Lempe said.

The show included a variety of work from traditional sacred art, icons, landscapes, to even dresses.

Castillo spoke about the need to be the one pro-life person in each circle of influence, with coworkers, neighbors, family, or friends. The reality of how many post-abortive women are already in our circles is big, she said.

“Your friend circle will get smaller,” Castillo said. “If one life is saved, it’s worth it.” “This painting is the first half at an attempt of displaying the intensity and mystical elements of Luke 1:35,” Lempe said. “This work is influenced somewhat by Michelangelo’s ‘Creation of Adam’ painting as I try to capture the moment when the “New Adam” is conceived by Our Blessed Mother.”

“I was having a difficult time making that icon,” she said. “I was thinking it would become a disaster.”

She felt Jesus saying to her, “This is your way of comforting me. Is that not important?” “Kids naturally recognize the beauty of a baby and they just cherish it,” Muser said of her drawing of her and her sister as children. “There is so much to unpack in the Annunciation,” Schulze said. “I wanted to unpack that life-giving yes that our Blessed Mother made on behalf of all humanity.”

“Her yes to uncertainty, to sacrifice, to isolation, to public shame and to every other suffering that she would endure is what allowed us to inherit eternal life.”

“Her fiat was not made in full knowledge of all that would happen, but in love and total surrender to the will of God.”

All photos by Makena Clawson