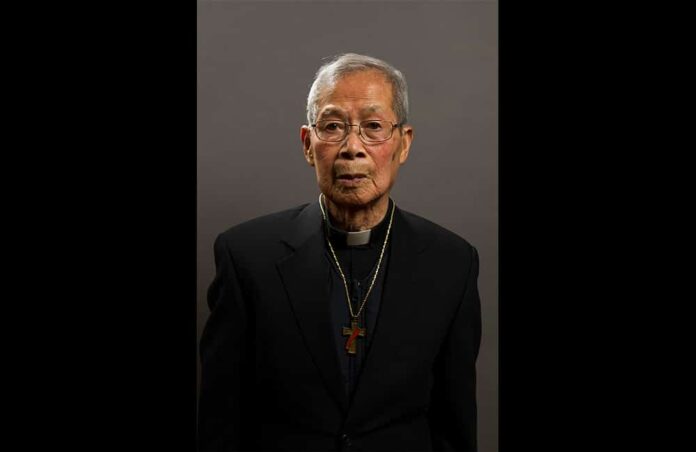 Deacon Joseph Van Tam Le, 97, passed away peacefully on the evening of July 18, 2019. Deacon Joseph was assigned to Queen of Vietnamese Martyrs in Wheat Ridge throughout his diaconal ministry.

Le Tam Van was born on March 15, 1922 in Nam Dinh, Quang Tri Province, Vietnam to Le Van Ho and Le Thi Su. He was baptized into the Catholic faith soon after his birth, where he took the name Guise or Joseph. As a young man, he attended French Catholic schools. He also attended seminary and high school at St. John the Baptist de La Salle with the intent of entering the priesthood. Eventually, he joined the Vietnam La Salle Christian Brothers and at one point was the Provincial of the Christian Brothers.

In Saigon, he taught a variety of subjects and eventually became the principal of Taberd School. He also travelled to France, England and Italy to study English and French Literature. Afterwards, he went back to Vietnam and continued his teaching career until his departure from Vietnam. Tam was fluent in Vietnamese, French, English, Spanish, Italian, Laotian, and Cambodian.

In 1974, while helping his community prepare to escape from their country, he was arrested by the Viet Cong and subsequently released for no apparent reason other than by the grace of God. Tam escaped Vietnam in a small boat with 66 other individuals on board. After three days at sea, they ended up on a small island in Singapore and were taken captive. He was released three months later and arrived in the United States on July 30, 1975.

On August 21, 1976, Joseph Tam married Terese Tan Thi Hoa at Holy Ghost Parish in Denver. They have four children: Mary, Gerard, Bernadette and Joseph. He then went to work for the State Social Services administering to the needs of the displaced refugees of different countries; predominately, the Vietnamese refugees. The couple began attending St. Ignatius of Loyola Parish where the Vietnamese community in the Denver metro met for worship.

On June 16, 1984, Joseph Tam Van Le was ordained a Deacon at the Cathedral of the Immaculate Conception by Archbishop James Casey. He was immediately sent to Queen of Vietnamese Martyrs parish to assist with the Vietnamese community that had escaped from the Communist regime in Vietnam and relocated to Denver.

“Deacon Joseph lived his diaconal ministry every day of his life,” said Deacon Joseph Donohoe, Director of Deacon Personnel, “He not only helped those in need, he experienced it in his own life. The deacons are blessed to have called him our brother.”