Abiding in the truth of Christ 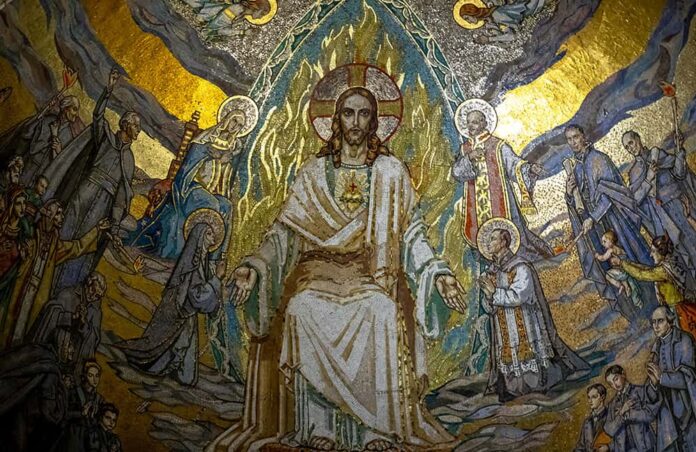 “And the Word became flesh and dwelt among us, full of grace and truth; we have beheld his glory” (John 1:14). John describes Jesus as the Word, the eternally begotten Son of the Father, become man in the world. We can take his identity as “Word” for granted, but it means that the Father speaks through his Son and reveals his Truth to us through him. We are saved by coming to know Jesus and through him we come to know the Father.

If Jesus reveals the truth to us in his person, why then do we need doctrine? To take one example, also from John’s Gospel, Jesus tells us both that “the Father is greater than I” and “I and the Father are one.” The Church receives and teaches both realities but working them out led to a major heresy in the early Church, Arianism, which, following only the first of these two verses, taught that Jesus was created by the Father. The Church had to define a doctrine, not inventing a new truth, but teaching us how to understand these verses together, as we see in the Creed. Jesus is “begotten, not made, consubstantial with the Father,” and also “came down from heaven . . . and became man.”

The Church exists to continue the mission of Jesus, proclaiming his truth and communicating his grace to the world. As members of his body, Jesus, the head, acts through us when we become docile to the action of his Holy Spirit in us, the life that animates his body. When we stake out on our own, however, relying on our own thoughts and strength, and seek to impose them on others, we no longer act in accord with the mission and spiritual power of Christ. We attempt to set up our own gospel and church. As Christians, we receive our mission from Christ and our goal is to abide in the truth and communion of Christ, in this life and in eternity.

One prophetic voice has raised itself against the “politicization” of doctrine and even a “crisis of faith” within her: Cardinal Gerhard Müller, who reflects on the need to be rooted in Christ’s truth against all temptations and distractions in The Power of Truth: Challenges to Catholic Doctrine and Morals Today (Ignatius, 2019). Müller, the former Prefect of the Congregation for the Doctrine of the Faith and close collaborator with Pope Benedict XVI, warns against a number of temptations that undermine the faith: a false development of doctrine that seeks to update faith in accord with the times and advocating for a paradigm shift, a distortion of the role of conscience that would place it above the Church’s authority, and an eclipse of the integrity of the sacraments and morality in the face of new ideologies that accept sin as normative rather than helping to overcome it through grace and conversion.

All these problems point to the need to recover a sense of faith that receives and accepts a supernatural revelation from God in humility, rather than placing oneself above it and manipulating it. Müller recognizes confusion in the Church and points out the need for truth to serve as the foundation for our life and salvation: “Truth is not an abstract theory in the heads of a few individuals, but rather the ground on which everyone finds stability and strength, and the source from which all can quench their thirst for God and eternal life (Jn 4:14). Only the unambiguous character of the doctrine of the faith makes possible the breadth of the pastoral perspective and an orientation toward the goals, and this is so from every starting point. For God wills the salvation of all mankind and also that everyone should come to the knowledge of God and of the truth of his revelation (1 Tim 2:4)” (9).

Not only must we come this knowledge of the truth, but we also must live it. Faith provides us with a relationship that sheds light on the meaning of our life and calls us into a communion of love: “By faith, then, we see the transcendent horizon — of human history, and of the personal destiny of each human being made in God’s image and destined for his household — that can motivate us to uphold human dignity without exceptions, even in the hardest cases. By faith, we gain the possibility of redeeming the suffering that the just must endure in a fallen world. And by faith, we add intimate love of God himself to the natural loves that motivate our perseverance” (149).

The truth is a gift entrusted to the Church and, through her, offered to each one of us. The Church must maintain this gift faithfully and we all must abide within it. If we do so, it will serve as a light that, despite all darkness, keeps our gaze upon the Word: The one who is Truth itself.

Jared Staudt
R. Jared Staudt, PhD, is a husband and father of six, the Associate Superintendent for Mission and Formation for the Archdiocese of Denver, a Benedictine oblate, prolific writer, and insatiable reader.
RELATED ARTICLES
Opinion