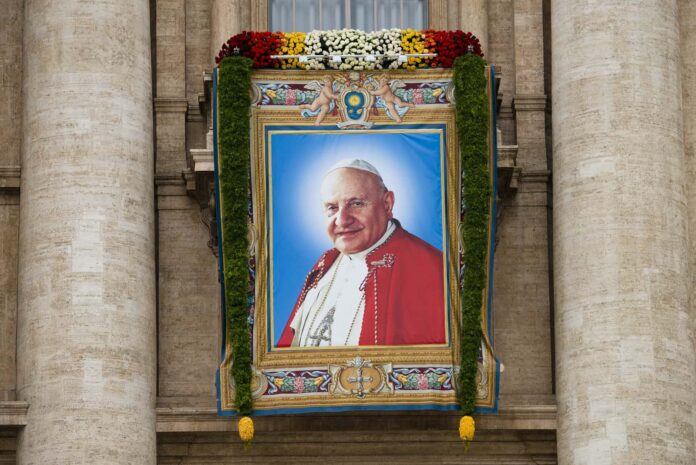 Sixty years after its solemn opening on October 11, 1962, is there anything new to be said about the Second Vatican Council? I think there is. And I hope to have said it in To Sanctify the World: The Vital Legacy of Vatican II, which has just been published by Basic Books.

Reading a great historical event is a matter of perspective as much as a matter of facts. Some churchmen today “read” the Council as having effected a “paradigm shift” in Catholic self-understanding, although competent theologians know that the Church does doctrinal development, not paradigm shifts. Others, “reading” Vatican II through the prism of their disgust with modernity’s deconstruction of traditional mores and institutions, declare the Council a supine surrender to secularity; the more fevered souls in this camp indulge in conspiracy-theories that may be attention-grabbing but have little or no basis in fact. Nostalgics and young Catholics innocent of historical knowledge imagine a supremely stable Church in the Fifties — a Church that never was — and think the Council a terrible mistake that never should have happened. These false perspectives create an ecclesiastical astigmatism that makes it difficult to see what Vatican II accomplished.

In the apostolic constitution Humanae Salutis, which formally convoked Vatican II, John XXIII wrote of the civilizational crisis of a modern world that “boasts of its technical and scientific conquests” but is deeply scarred by lethal efforts to “reorganize” itself “by excluding God.” What the “temporal order” desperately needed, he proclaimed, was “the light of Christ,” which would reveal to humanity the truth of human nature, the nobility of human dignity and the grandeur of humanity’s destiny — life with the Triune God.

Then, a month before the Council opened, the Pope gave an important radio address in which he said that “[the] phrase, ‘the Kingdom of God,’ expresses fully and precisely the work of the Council.” Vatican II, like the 20 previous ecumenical councils, was a renewal of humanity’s “encounter with the face of the risen Jesus.” Because of that, “the purpose of the Council is…evangelization.”

The third, and most important, text that clarifies John XXIII’s original intention for Vatican II is his opening address to the Council on October 11, 1962, known by its Latin title as Gaudet Mater Ecclesia (Mother Church Rejoices). There, the octogenarian Pope underscored the essential Christocentricity of Vatican II, emphasizing that “the Church…takes her name, her grace, and her total meaning from the divine Redeemer.” And it always would, for “Christ Jesus still stands at the center of history and of life.”

Citing Psalm 116, the Pope noted that the “truth of the Lord remains forever” and then insisted that the first truth the Church proclaims is the Lord himself. To be sure, the Church is the Mystical Body of Christ, continuing the Lord’s work in the world. It would best do that work, John XXIII urged, by offering friendship with Christ as the remedy for modernity’s confusions and conflicts.

Read through Pope John’s original intention, the 16 documents of Vatican II come into focus, and in their proper order. The Council’s teaching on divine revelation anchors everything else: God has spoken into the world’s silence, and through the divine Word we come to know the truth about ourselves and our destiny. Then there is the Council’s teaching on the Church: in the Church, we find the template for realizing modernity’s often-frustrated quest for authentic human community (not least by learning how to worship the One truly worthy of worship). The various states of life in the Church discussed by the Council then identify the mutually supportive responsibilities of the entire People of God, clergy and laity, for the mission of the Church.

Christ is the center. Rekindling that radically Christocentric faith for the sake of evangelization, not letting a thousand ecclesiastical flowers bloom, was John XXIII’s original intention for Vatican II.