His Church. Our Experience.
Subscribe
HomeLocalHow a baby born at 26 weeks became a light of faith...
LocalPro-LifeStories 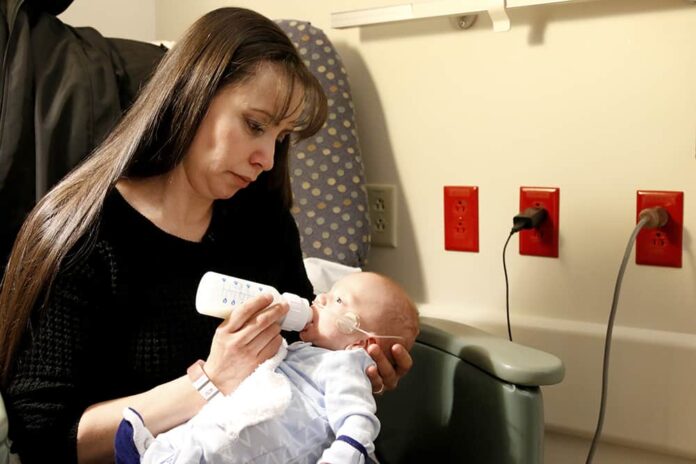 “The doctor said that, if I wanted to save my baby’s life, I had to give birth in the next hour. I was only 26 weeks pregnant,” Maria Ramos recalled with tears in her eyes the painful moment in which she thought she would lose her child Mateo. Her husband, Ricardo Luna, and their two children: Judith, 11, and Ricardo, 9; with watery eyes sat beside her, remembering the four months they had spent in the University of Colorado-Anschutz Hospital, seeing Mateo fight for his life in the neonatal intensive care unit (NICU).

And yet, amid the scene of this suffering family, their tears were simultaneously mixed with smiles of joy and hope as they recounted the moments that had sustained them along their journey, such as the times Mateo smiled at the sound of his mother’s voice and looked around to find her, or those in which he was finally rocked to sleep after feeling his parents by his side.

“He was so little when he was born. He measured 11 inches and weighed 1 lb. 7 oz. Now he weighs 8 lb. 1 oz.,” Ricardo said with a grateful smile. “If he passes the oxygen test next week, he’ll go to Children’s Hospital to have a surgery to remove two hernias, and hopefully he’ll get to come home soon after that.”

“Trusting in God has sustained us in these moments. My husband and I have talked about all of this, and our prayer has always been, ‘Lord, help us.’ And there has always been a light to keep us going,” said Maria, who with her husband and children is a parishioner at St. Michael the Archangel Parish in Aurora.

Everything began during a routine ultrasound Nov. 15, when the doctor told the couple something was wrong: The baby had not grown since the previous month. The doctor then asked Maria to be admitted in order to monitor her health and the baby’s.

“They said that it was because my placenta wasn’t sending enough oxygen to the baby,” Maria recalled.

The doctors had her count the times Mateo moved every hour, but one night, Maria knew something was wrong.

“I felt he was losing strength, he wasn’t moving as much, so I told my husband and the doctor I was scared,” Maria said. “That night my husband and I had a conversation and I told him, ‘My husband, we have to put ourselves in God’s hands. Our faith is being tested by God, but we will get through this.”

Maria had to give birth the following afternoon, on Nov. 18. It was the only chance of saving Mateo’s life.

“I entrusted my son to our Mother Mary that day, and I told her, ‘Mother Mary, my son can no longer be in my womb, but you can receive him in yours. Take care of him and protect him for me,” she said.

The following day, Ricardo and Maria received the sad news that Mateo’s lungs were bleeding. The doctors said they would try to do everything they could, but that he wasn’t doing well. One of the doctors and a nurse recommended that they call someone to baptize their child, if they were Catholic or Christian.

One of the nurses, who was also Catholic, even offered to help them contact a priest.

“We need to baptize him. He and we all need God and the Holy Spirit, and we can’t let anything happen to him without him being baptized,” Maria told her husband.

The following months weren’t easy, as one day Ricardo and Maria would see their child improve and the next day worsen. Mateo was healthy except for his lungs. He was hooked up to an endotracheal tube to help him breathe and spent over two months in an incubator.

Besides the struggle of seeing their child fight for his life, the couple has  had to find creative ways to balance work, family and other responsibilities.

After work, Ricardo usually goes home to shower, eat dinner and see his wife and kids, and then heads over to the hospital, where he spends the evening, puts Mateo to sleep and leaves before midnight.

Maria takes the children to school in the morning and then heads straight to the hospital to be with Mateo. Later in the afternoon, she goes back home to cook for the family before they arrive from school or work and then takes care of her older children.

On the weekends, they go as a family to spend time in the hospital with Mateo, although his older siblings are not allowed to see him due to the age restriction at the NICU.

Among the many ways this unexpected event has made the Luna family reflect, they feel as though the topic of abortion has taken on a different color.

“We went to Mass at St. Pius X Parish one Sunday and the priest invited all of us to go pray outside an abortion clinic,” Maria recounted.

“Later that day, looking at my son, I thought: ‘How is it possible that people can believe this human being doesn’t feel, only because he’s so little? Of course he feels! How can a mother allow someone to do that to their child? I couldn’t wrap my mind around it.

“I saw all the opposite: My child looked for me and smiled when I talked to him. He was so little and yet he was looking for my husband and me. He started doing that after he stopped being sedated, a month and a half after he was born.

“I saw that his size did not diminish his strong desire to live, and I think all babies in the womb have that same desire to live. If God is sending them, they are here for something good.”

Pedro and Maria Ramos, Maria’s brother and sister-in-law and also parishioners at St. Michael the Archangel Parish, became Mateo’s godparents for being the only family members present at the time Father Bermudez arrived to baptize the baby.

“He’s a miracle. Things like these increase our faith because we realize that, for God, nothing is impossible. When we saw him so little, we said, ‘Lord, only you know why he came into this world so little, but you also have the power to sustain him.’ And look at him, there he is,” Pedro said with a smile as he pointed to Mateo opening his little eyes for a photoshoot.

“It is an honor for me to be his godmother. He is truly a miracle. We must never lose our faith in God because he can truly act in our lives,” Pedro’s wife, Maria, added.

Beyond all their difficulties, Ricardo assured that he and his wife will love Mateo the same, even if he were to develop any type of defect from his premature birth.

“I don’t think there is such a thing as a bad child for a parent,” Maria concluded. “We have learned from this experience to live day by day, always giving thanks to God, because we don’t know what tomorrow will bring. All we can do is strive to be better Christians, better spouses, and a better family.”