Deterioration over its 134-year history was putting the venerable landmark at risk. 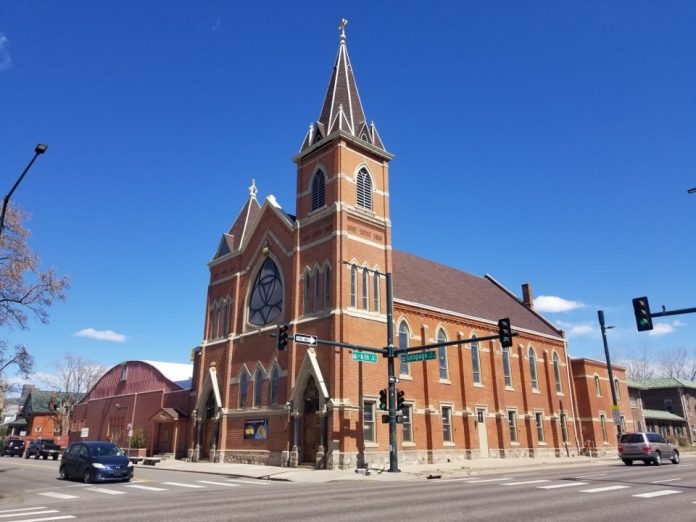 The red brick Victorian-Gothic façade of Denver’s St. Joseph Church has been a dignified landmark at the corner of West Sixth Avenue and Galapago Street since 1888. Due to its architectural significance, the educational role it played for more than a century, and its ongoing spiritual and social mission, the church is on the National Register of Historic Places.

That designation, awarded in 1982, recently helped the working-class parish get two grants from History Colorado’s State Historical Fund for critical repairs to preserve and restore the exterior of this architectural gem. In gratitude, the parish held an April 9 talk by experts sharing how the funds are being used, offering tips on how to care for older buildings and explaining the benefits of preservation.

“Preservation tells stories, protects architecture, inspires creativity, promotes reuse, and makes our communities unique,” Shannon Stage, preservation coordinator at Historic Denver Inc., told the audience gathered in the parish gym. “It ensures that the places and stories of our past remain part of our future.”

Significant deterioration at 134-year-old St. Joseph’s was putting the building at risk, said architect Jim Paull, CEO of JP Architecture PC, who serves as a consultant for St. Joseph’s. The church’s exterior features two square towers and lancet windows. Beautiful late 1800s stained-glass graces the interior, which showcases a light-filled apse crowned with three triangle-shaped stained-glass windows depicting the Ascension. In 2019, exterior skylights meant to protect the Ascension windows were found to be leaking water. The leaky skylights were causing the stained-glass windows to sag and were allowing water to drip into the sanctuary.

“The skylights…were near collapse,” Paull said. “The caulk wasn’t going to make it another year.”

The parish membership, which is 90 percent Hispanic and of slim to modest means, also contributed thousands more to repair deteriorating wooden frames on 28 religious stained-glass windows that could not be funded by the state, administrators said.

A second State Historical Fund grant, in the amount of $229,211, was awarded last December. It is being used to repair serious damage to the two towers of the church building.

“The damage to the towers was not very noticeable until a crisis occurred during heavy winds (in January 2021),” Bishop Jorge Rodriguez, St. Joseph pastor since last July, told the Denver Catholic. “A large piece of sheet metal fell to the sidewalk and pulled loose another piece of metal, which was threatening to fall. Fortunately, no one was hurt…but the dangling piece remained a great threat to pedestrians entering the church directly below it.”

The parish paid to have the broken piece removed and subsequently learned that water infiltration had caused the wood of the towers to rot and the metal soffits to rust. Additionally, the towers are full of pigeon waste.

“The first step is to clean out the water and pigeon waste and close off access to the pigeons,” MaryAnne Hand, the parish’s grant coordinator, told the Denver Catholic. “Then, at summer’s end, they will rebuild the towers’ damaged areas. The repairs will be rustproof and historically accurate.”

Maintaining the historical character of a building enhances its value as well as its beauty, the experts told the April 9 gathering. Home and business owners should be aware that preservation can offer economic benefits in the form of tax credits for restoration costs to buildings with national, state, or local historic designations, Stage said. (Only nonprofits are eligible for State Historical Fund grants.)

Kara Hahn, a principal planner with Denver Landmark Preservation, shared common criteria on what makes a site historic whether one is seeking national, state, or local designation.

Preservation architect Melanie Short, a senior project manager with the City and County of Denver, offered preservation tips. She recounted removing paint from the brick exterior of St. Joseph’s Church in a previous preservation effort in 2001.

“Do not paint brick. It changes the way the brick wall breathes and lives—and it traps moisture behind it,” she explained, recommending chemical paint removal over sandblasting.

Paint, however, does protect natural wood, Short said. And if a building has wood frame windows, she urged restoring them over replacing them with frames made of materials that once damaged will need to be replaced again, asserting, “A wood window is almost repeatably fixable…for hundreds of years.”

Historic preservation is a labor of love, Paull said. “It is well worth saving the architecture we have in our neighborhoods.”

Being the recipient of generous state grants as well as good advice from preservation experts impelled St. Joseph’s to share the expertise it has benefited from with others, Hand told the Denver Catholic.

“The parish is so blessed to have this State Historical Fund support which came at a very critical time,” affirmed Bishop Rodriguez.

“It has been a miracle,” Hand said.