His Church. Our Experience.
Subscribe
HomeLocalDeacon Warren Lybarger, remembered as friend to everyone he met, dies at...
LocalObituaries

Deacon Warren Lybarger, remembered as friend to everyone he met, dies at 88 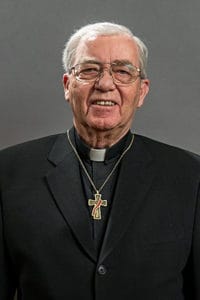 Deacon Warren Lybarger, 88 years old, passed away peacefully on April 5th, 2022. Deacon Warren’s primary assignment was to St. Joseph’s Parish in Ft. Collins, Colorado. He retired in June 2008.
Warren Gale Lybarger was born on December 12th, 1933, in Sterling, Colorado to Willis and Helen Lybarger. Growing up on the eastern plains, he attended public schools and the local Baptist Church in Sterling. After high school, he left for Ft. Collins attending Colorado State University which, at the time, was known as Colorado A&M. In the process of growing up, he developed a keen interest in business; specifically in numbers which drove him into an accounting career.
His career took him to JM McDonalds in Ft. Collins, where he met Edna Cordova, a native of Ft. Collins and a Catholic. On August 15, 1952, Warren and Edna were married at Holy Family Catholic Church in Ft. Collins. Then, on the 21st of December 1952, Warren was baptized into the Catholic Church at St. Joseph’s Parish in Ft. Collins. The couple was blessed with four children: Warren, Stephen, Timothy, and Suzanne. Their blessings also include 19 grandchildren, 21 great-grandchildren, and one great-great-grandchild. His wife, Edna preceded him in death in 2013.
Warren’s professional career took him to a few different corporations. He eventually accepted a Business Administrator position at St. Joseph’s Parish in 1985. Afterwards, he started his own accounting business in Ft. Collins until he retired. Warren and Edna became very involved in the Church. In addition to being a lector and an extraordinary minister of Holy Communion, Warren joined the Knights of the Columbus and the Elks Lodge in Ft. Collins. He was also involved in investment clubs and the United Way.
On January 16th, 1984, Deacon Warren Lybarger was ordained a Deacon by Archbishop James Casey at the Cathedral Basilica of the Immaculate Conception in Denver, CO. He was immediately assigned to St. Joseph’s parish in Ft. Collins. He later spent three years at St. John the Evangelist Parish in Loveland and then returned to St. Joseph’s Parish to complete his active ministry. Deacon Warren was very involved in Marriage Preparation and the Marriage Sacrament.
“Anyone who met Deacon Warren became a close friend.” said Deacon Joseph Donohoe, Director of Deacon Personnel, “Deacon Warren immediately made people feel comfortable and important to the Church and to him. He was a salt of the earth kind of guy that attracted engaged couples as well as those seeking assistance in their faith.”
A Vigil Service was held at St. Joseph’s parish on April 19th, 2022, at 6:30 pm. The Funeral Mass was celebrated by Archbishop Samuel Aquila on April 20, 2022, at St. Joseph’s Parish at 11:30 a.m. Following the Mass, he was buried at Grandview Cemetery in Ft. Collins.
Share
Facebook
Twitter
Linkedin
Pinterest
Email
Print
Previous articleLongtime deacon and Vietnam vet Tom Quinlan dies at 84
Next articleGrants help preserve, restore downtown Denver’s St. Joseph Church