‘Full of Grace’ a shining example of modern Christian art 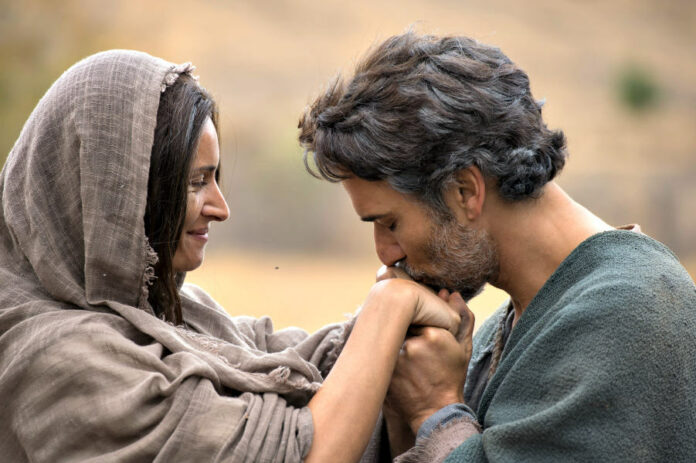 What happened to Mary after Christ died? And how did Peter deal with being the rock Christ commissioned him to be?

This is precisely the story that is explored in Full of Grace, the tender, contemplative and beautiful new film from writer/director Andrew Hyatt. The story focuses on Mary’s final days on Earth before she is assumed into Heaven, and it intimately captures the relationship between her and her son’s successor, Peter.

Full of Grace is a new kind of Christian film, one that deviates from the typical model of most Christian films. Described by Hyatt as a “cinematic prayer,” the film is perhaps the first of its kind. The first 15 minutes of the film is intentionally paced slowly so as to prepare the audience and put them in the right mind set for viewing the film.

“Everything about the film is intentional,” he said. “This experience requires something of the audience to put in front of the film. The film, like scripture, should speak to you wherever you’re at in your life.”

Hyatt also sought to take these central biblical characters who are often perceived as being perfect and humanize them, making them relatable. Not since Mel Gibson’s The Passion of the Christ have biblical characters been depicted as fallible and as human as they are in Full of Grace.

“One of the things we really wanted to do in the film was put the flesh on the bones of these characters,” Hyatt said. “They were living, breathing people that had the same experience as we do in our faith.”

Noam Jenkins plays a doubtful but faithful Peter, and Bahia Haifi is perfectly cast as a noticeably aging but strikingly wise Mother Mary. The film focuses on the tender relationship between the two.

Haifi’s performance as Mary is the true highlight of the film; the dialogue ebbs and flows throughout the film but always peaks when she speaks. Her humble demeanor and tender disposition is exactly as one would expect her to be in reality, and the wisdom she imparts through the film is hauntingly relevant to any walk of life, especially that of Christians.

Hyatt sought to make a film that didn’t depict the Christian life as being one that’s easy; after all, that hasn’t been his experience. Born in Colorado, he grew up in the Church and went to St. Thomas More Catholic school. However, once he hit college, he dropped his faith completely.

“My faith didn’t have anything interesting to say when put up against the temptation of the world,” Hyatt said.

In 2008, though, Hyatt experienced a conversion, which he vividly remembers. He was in a hotel in Toronto, and he said that “literally, God showed up.” He turned his life over to the Lord at that point, but it wasn’t an easy process.

“It wasn’t like I said ‘yes’ to Christ and then everything was wrapped up with a nice bow,” Hyatt said. “It took a few years of extracting myself from that life.”

After kickstarting his film career with two relatively successful films, Hyatt was approached by Outside Da Box, a Catholic, nonprofit production company, about making Full of Grace.

He initially turned down the project. He never had a desire to make a Christian film, but in getting to know fellow producers T.J. Berden and Eric Groth, he entertained the idea and wrote a draft of the script. He wanted to write a story that hadn’t been told before, he said, but also one that didn’t fall into the stereotype of most Christian films.

Despite writing a draft for the script, Hyatt still wasn’t interested in making the film. He was a young filmmaker full of worldly ambition, and he felt making a Christian film was beneath him.

“I was waiting for bigger, better things that were surely going to come…what a big mistake that was,” he said. God began systematically closing doors in his life until Full of Grace was all he had left to do.

For 18 months, Hyatt had no work. A new father, he and his wife burned through all of their savings until they only had $200 to their name. They had just let go of their lease on their apartment, they had nothing left, when he got a call from Berden and Groth informing him they raised the money for Full of Grace. They asked if he was interested in making the film.

“Had I not had nothing, I’m pretty sure I would’ve said no,”Hyatt said. “But there was literally nothing, so I said OK.”

The fruits of the film speak for themselves.

“Making Full of Grace was the first time on my entire life that I’ve been 100 percent obedient to what God wanted me to do,” Hyatt said. “To see the fruit of God’s work now in the outcome just blows me away. It’s nothing I can take credit for.”

For more information on Full of Grace, visit fullofgracefilm.com. Full of Grace will be released on digitally and on DVD on January 5 through Cinedigm.