From the deathbed backwards 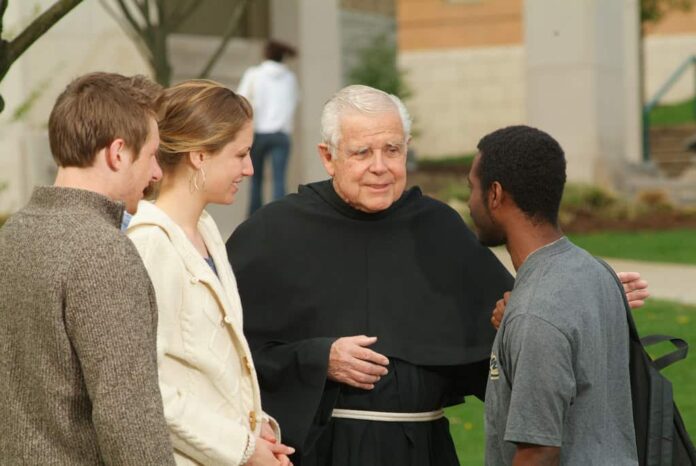 Mary Beth Bonacci is a syndicated columnist based in Denver and the author of We’re On a Mission From God and Real Love.

In 1999, I was awarded an honorary Ph.D from the Franciscan University of Steubenville. The school’s president, Fr. Michael Scanlan, told me that the honor generally went to wealthy donors to the university, but that he nominated me because he believed the work I had done in my speaking and writing ministry merited the degree.

One of my duties at the graduation ceremony that day was, in fact, to deliver the commencement address. The theme of my talk was “Living Life From the Deathbed Backwards.”

Today a very different event is being held in that same field house on the campus of Franciscan University — a memorial Mass for that same Fr. Michael Scanlan, who passed away last week. As I contemplate the life of that amazing, holy man, I’m realizing that he indeed lived his life “from the deathbed backwards.”

Young Mike Scanlan was already a man of deep prayers — and was well on his way to becoming a Harvard-trained lawyer — when he first heard the call to give his life completely to God in the religious life. Already a skilled litigator, he reportedly negotiated a deal with God whereby he would finish his law degree before entering the priesthood. And so he did, entering the Franciscan order after graduation.

In 1974, he was assigned to the presidency of the small, rapidly failing College of Steubenville, located in a dingy mining town on the Ohio River. The school was in such deep financial trouble that ads were being run offering the dormitory building “for sale or lease.” It was hardly a plum assignment for the rising Franciscan star. He was initially less than enthused, but then a friend told him that God doesn’t send a missionary to Africa without first putting Africa in his heart. And suddenly, Steubenville was in his heart. He was overwhelmed with a desire to go there, and to serve the people of this dying little school.

The college had little money, few students and big problems. And yet, his initial goal was not to raise money or to recruit students. It was to bring every aspect of the school’s life under the Lordship of Jesus Christ.

Those of you familiar with the Franciscan University of Steubenville know that he did just that — and so much more — during his 37 year tenure as the school’s president and chancellor. Under his direction, the school went from a small, failing regional college to one of the most prestigious and influential Catholic universities in the world.

How did he do it? In a word, prayer. He began every day with God, and submitted to Him his entire schedule. And God frequently made changes — additions, deletions, tweaks. He submitted every decision to God as well, and would not move forward until he was certain that he had Divine approval.

Fr. Mike was gifted with great intelligence, dynamic communication skills and a magnetic personality. But the secret to his success didn’t lie in those gifts alone, but in what happened to them when they were infused with the Holy Spirit and placed entirely and regularly at the service of God. He radiated the Holy Spirit. As one former student said “When you met him, your life changed.”

He changed so many lives. It would be impossible to quantify the impact he has had — through the University, its graduates, the Charismatic Renewal Movement he led, and his personal relationships with so many, including me — on the Church here in the U.S. and around the world.

When I spoke about living life from the deathbed backwards, that’s what I was talking about. Looking back and knowing that the world is a different place because we were here. Seeing God face to face, and being able to say “This is what I did with the gifts you gave me.”

I look at the life of someone like Fr. Mike, and I think “I want to do that.” I want to turn a college around and place it under the Lordship of Jesus Christ and use it to lead untold thousands of people to God. That seems like a really good idea. It’d be a great thing to tell God about on Judgment Day.

But then I remember it wasn’t Fr. Mike’s idea of how he would live his life. He thought he would be a lawyer. Or a missionary in Brazil.

The college thing? That was God’s idea. Fr. Mike only found it because he was so committed to discerning God’s will through prayer. And he only accomplished it through submitting everything he did, every step of the way, to God in prayer as well.

So then I realize that, if I want to truly emulate Fr. Mike, the best way wouldn’t be to emulate his results, but rather his method.

I can best honor Fr. Mike by becoming a woman of prayer, by submitting my life entirely to the God who had a plan for him, and who undoubtedly has a completely unique and personalized plan for me as well.

Rest in peace, Fr. Mike. Thank you for everything you did for the Church, and most of all for showing us what a truly Spirit-filled life looks like.

Mary Beth Bonacci
Mary Beth Bonacci has been giving talks on love and relationships across the United States and internationally for . . .well . . . her entire adult life. She was among the first Catholic speakers to introduce audiences to St. John Paul II’s beautiful Theology of the Body. She is the founder of Real Love, Inc., an organization dedicated to promoting respect for God’s gift of human sexuality. Her book Real Love, based on the Theology of the Body, has been translated into ten languages. She is also the author of We’re on a Mission from God, writes a monthly column for Catholic newspapers and contributes regularly to the Catholic Match Institute blog.
RELATED ARTICLES
Opinion