A letter from purgatory 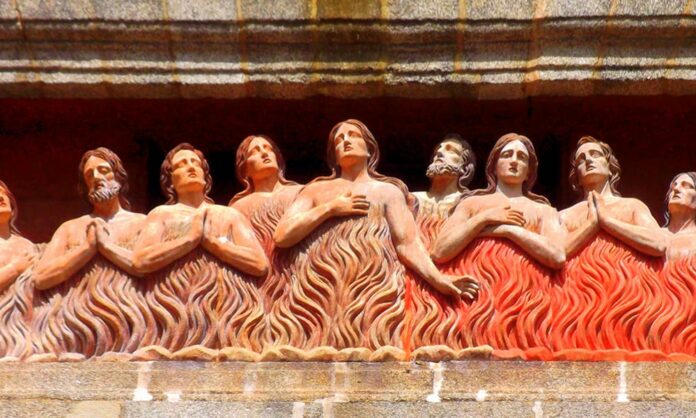 Mary Beth Bonacci is a syndicated columnist based in Denver and the author of We’re On a Mission From God and True Love.

A gentleman named Harmon Hallett, the father of a friend, died recently. In a Facebook post, she wrote “He was very adamant about not being eulogized. He was terrified nobody would pray for his release from purgatory. He was sure he was headed there first and said on more than one occasion, “I don’t want anyone thinking I’m a saint! I want them praying for me!”

I can relate. The beauty of the Catholic funeral is that is centered around praying for the deceased person. But funerals have evolved from occasions of prayer to “celebrations of life,” and the only mention of an afterlife consists of reassurance that the deceased beloved is currently in Heaven, enjoying the Beatific Vision and unlimited, calorie-free pastries. Or whatever.

This is doing no favor to the deceased person in question.

I don’t want this happening at my funeral. In fact, I so don’t want it to happen that, several years ago, I wrote a letter, to be read aloud at my funeral Mass. I lost it somewhere along the way. But, inspired by Harmon Hallett’s example, I have re-written it.

I want this, in its entirety, read at my funeral:

So, apparently I’m dead. I’ll make this brief, as I’m not entirely certain of the protocol involved in speaking at one’s own funeral. And I’m sure you’re all anxious to get to the reception. Which I hope for your sake will in some way involve cocktails.

In the mean time, I have just one request: If anybody stands up here and says “She is in Heaven now,” I want that person removed from the pulpit. Immediately. Because I’m not so sure that I am.

I believe in the Catholic doctrine of Purgatory. And I believe that my personal best case scenario will probably involve some time there. Not because I’ve lived a double life or committed any big, secret sins or anything. Just the garden variety selfishness and weakness that I’m sure many of you observed, but can’t mention right now because you are supposed to “speak no ill of the dead.”

But I, as the dead, can speak any way I like.

I believe that Jesus died for my sins. Absolutely. I also know that I responded very imperfectly to the graces he won for me. And that, since “nothing unclean enters Heaven,” I could probably stand some purification before standing in the presence of the eternal God. During that process, I’m going to need prayers.

How? Have Masses said. It’s easy. Just go to any Catholic parish office, make a donation and request a Mass for the repose of my soul. Or more than one. As I write this, Masses can even be ordered on the internet. By the time I die, who knows? Maybe you can have a Mass said just by thinking about it.

And say prayers for me. With any luck, that little holy card they hand out will contain a prayer. If not, go with this one: “May her soul, and the souls of all the faithful departed, through the mercy of God rest in peace, Amen.”

Say that a lot.

I know some of you don’t believe in all of this. That’s okay. Do it anyway. Humor me. Others may be thinking I’m being unduly humble, and all of this isn’t necessary. Again, humor me. Because unless I was martyred — unless my death was immediately preceded by a gunman asking if I believe in Jesus Christ — I am relatively certain that I will need the prayers. Actually, even if the gunman scenario actually happened, you should still pray for me, as it is possible I misunderstood the question and thought he was offering me fries or something.

And don’t think that, if I’m wrong and I actually made it to Heaven in a straight shot, all of this prayer will be wasted. I am quite certain that God will make good use of it.

You can view all of this as an investment. You pray for me now, and I will pray for you when your time comes. Because I will be keeping tabs.

Okay, so now you get back to the praying and saying all the nice things that people say about the deceased at funerals.

But don’t let anybody get too carried away.

With love from the Great Beyond, MB

There it is. I am placing a copy in my safe deposit box. But I am also charging all of you, in the event of my demise, to make sure that it is read. And to pray for me.

And while you’re at it, say a prayer for Harmon Hallett. I’’m sure he’ll appreciate it.