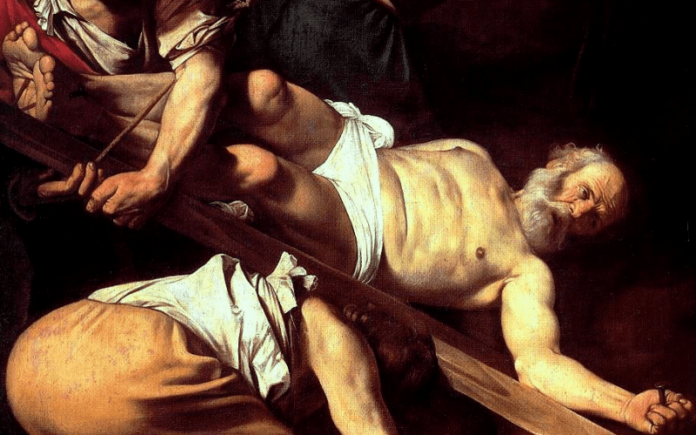 On November 24, 2013, Pope Francis displayed St. Peter’s bones publicly for the first time. This momentous occasion culminated the incredible 70-year process of discovery and authentication of the relics. The bones now thought to belong to the Apostle Peter were caught up in tumultuous conflict between two archeologists: accidentally discovered, placed in storage for roughly twenty years, received a short period of authentication and veneration under Paul VI, were returned to storage for decades after Paul’s death, until Pope Benedict XVI began a process to reconsider their authenticity.

On June 29, we will celebrate the Solemnity of Sts. Peter and Paul, the Apostles who centered the Church in Rome through their ministry and martyrdom there. The Church in Rome, including two of its major basilicas, was “built on the foundation of the apostles” (Ephesians 2:20), preserving their authority and celebrating the sacraments over their tombs. After excavating under the altar of St. Paul’s Basilica, Pope Benedict XVI authenticated the bones discovered there as Paul’s in 2009. Those lucky enough to have taken the Scavi Tour under St. Peter’s Basilica have entered into the ancient necropolis over which Constantine built his grand basilica. This area remained largely untouched until the death of Pope Pius XI in 1939, when a worker fell into one of the ancient tombs while preparing for Pius’ burial.

The remarkable and tortuous tale of the discovery of Peter’s bones has been told before, particularly by John Walsh’s The Bones of St. Peter (Sophia, 2011 reprint). Bestselling author John O’Neill felt compelled to tell the story again, despite overwhelming health obstacles, to add some important unknown details. His new book, The Fisherman’s Tomb: The True Story of the Vatican’s Secret Search (OSV, 2018), not only continues the narrative into the pontificate of Francis, describing the ping pong of Vatican archeological politics in the fight over Peter’s bones, but also brings the narrative to the United States.

The uniqueness of O’Neill’s account derives from the previously unknown support of Houston’s oil tycoon George Strake, who financed not only the excavation to find Peter, but many other crucial projects of the Holy See. O’Neill claims that Strake also financed the Holy See’s efforts to rescue Jews and Allied prisoners during World War II and to counter the rise of Communism afterwards, financing new parishes and schools throughout Italy. Strake made his immense fortune by discovering a large oil reserve outside of Houston and determined to give away as much of it as he could before he died. Not only did he finance extraordinary projects for the Holy Father, but he also endowed the Pius XII Memorial Library at St. Louis University to honor the Pope who began the excavation and to preserve an extensive microfilm collection of the treasures of the Vatican Library.

We find a group of three priests central to the narrative, infelicitously dubbed the “Three Amigos” by O’Neill, who worked to support the excavation under St. Peter’s. This threesome included Giovanni Battista Montini, the future Paul VI, and two American priests, Walter Carroll and Joseph McGeough (who later became an Archbishop and Apostolic Nuncio). It would have been more tactful to stick to his terminology of “the three Americans” to refer to the incredible work supported by Strake with Carroll and McGeough as intermediaries to the Holy See (105). One remarkable tidbit comes from the future Paul VI’s quiet visit to Colorado to visit Strake at his Glen Eyrie estate outside of Colorado Springs (109).

O’Neill also paints the picture of Margherita Guarducci, the archeological hero of the story, who took over the excavations under St. Peter’s after the mishaps of the initial team (led by her rival Father Ferrua). She used her expertise in epigraphy, the interpretation of ancient inscriptions, to crack the code leading to the correct location of St. Peter’s bones, after other bones had mistakenly been attributed to the Apostle (111). The initial excavation had overlooked the importance of the Graffiti Wall, which contained the inscription, “Peter is here,” in favor of the more centrally located Trophy of Gaius. The bones identified by Guarducci had been buried previously under the Trophy, but relocated, probably for safety, and forensic tests revealed them to be from a man in his 60s of robust build, draped in purple imperial style cloth from the first centuries AD, and with his feet severed in a sign of crucifixion.

The Fisherman’s Tomb helps to complete the story of how we found St. Peter under the basilica built in his honor. The book contains some small inaccuracies, repetitiveness, and overreaching analogies that deflect from its central focus, but nonetheless provides an important narrative. It can help us to discover the centrality of the Apostle Peter for his upcoming feast day and may inspire us to make our own pilgrimage to find and venerate his relics.

Jared Staudt
R. Jared Staudt, PhD, is a husband and father of six, the Associate Superintendent for Mission and Formation for the Archdiocese of Denver, a Benedictine oblate, prolific writer, and insatiable reader.
RELATED ARTICLES
Catholic News Agency