His Church. Our Experience.
Subscribe
HomeLocalFather Traynor grateful for opportunity to serve as seminary rector
Local

Father Traynor grateful for opportunity to serve as seminary rector 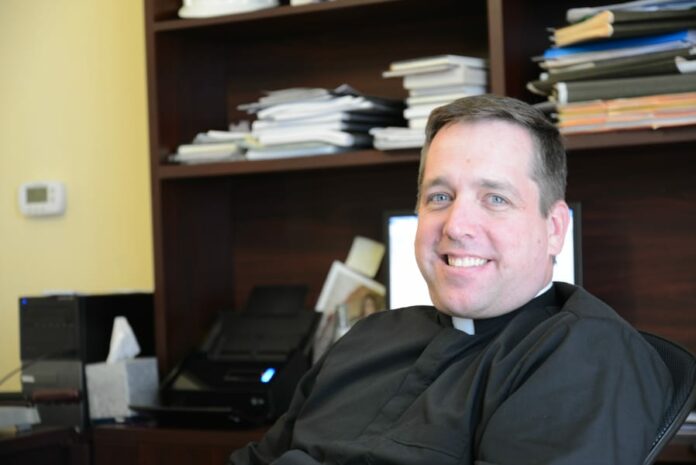 Father Traynor will begin a new assignment next month at St. Benedict Parish in Yankton, South Dakota, in his home diocese of Sioux Falls.

In a letter sent to seminary faculty and students, the archbishop thanked Father Traynor for his service. He also thanked Bishop Paul Swain of Sioux Falls for allowing Father Traynor to serve in Denver for four years.

“Father Traynor, in addition to his seminary work, has overseen the restructuring of the Deacon Program, improved the Catholic Biblical School and Catechetical Schools, leading to record enrollment,” the archbishop said.

Father Traynor was the third rector of the seminary, succeeding Msgr. Michael Glenn, current pastor at Our Lady of Peace in Silverthorne, who had served as rector for 12 years. Archbishop Aquila served as the seminary’s founding rector.

Father Traynor told Denver Catholic that his assignment was “an unexpected chance to be back in the archdiocese, and a great opportunity to be once again working at St. John Vianney Seminary, which is such a tremendous seminary.”

In his four years as rector, Father Traynor has worked to grow, in conjunction with seminary staff, on a four-year priestly identity curriculum that focuses on human development, noting that “there is nothing like it in the country.”

He said that from his point of view, the biggest challenge in seminaries today isn’t the intellectual, spiritual or apostolic formation, but the human formation. “More and more guys are coming from broken families, and our culture is more and more broken,” he said.

Developed primarily by Father Dan Barron, director of spiritual formation, and Christina Lynch, director of psychological services, Father Traynor explained that the program “combines elements of conversion from the spiritual exercises, good psychological understanding of human development, and the theological, philosophical and pastoral underpinnings of all of that growth that needs to happen.”

He said the idea is to “focus on the human development of these good men, to allow the grace of God to bring any healing or transformation that needs to happen in their lives, so that their humanity, and this is the key, that their humanity becomes a bridge to Christ.”

He said that the program not only helps the seminarians in their formation, but it also gives them an entire “toolbox” of resources to assist their future parishioners.

He called it “a crowning jewel” of the seminary that was just getting off the ground when he arrived.

Back to parish life

In his 17 years as a priest, Father Traynor has been a parish priest for all of them, except for the last four years.

St. Benedict Parish was founded in 1993 as the second parish of Yankton, and the parish currently lists some 800 families as members. The two parishes in Yankton share the administration of the one Catholic grade school in town, Sacred Heart elementary, with pre-K through 4th grade housed at the St. Benedict campus.

An additional bonus for Father Traynor is the parish’s proximity to the Broom Tree Conference and Retreat Center, where he will assist with giving retreats and spiritual direction.

“It is a beautiful place,” he said, “offering outstanding retreat opportunities.”

The other half is a youth camp, with opportunities for camping.

“It’s a beautiful gem in southeast South Dakota,” Father Traynor said, “and a lot of beautiful work, both in retreats and in the activities of the youth and family camp, to help families grow together, with each other, and in faith with God.”