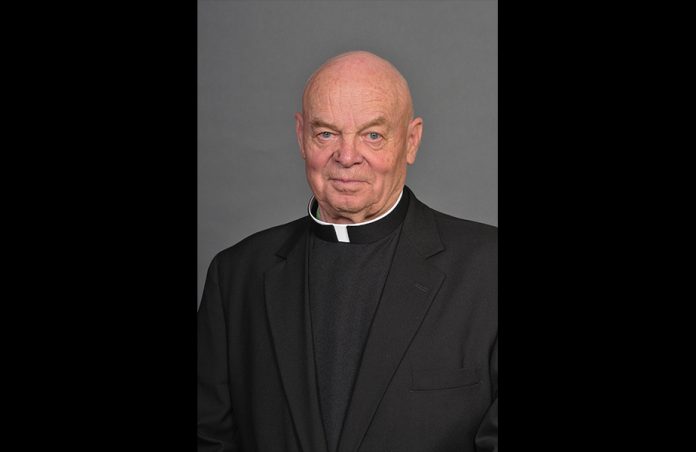 Father Jude was the beloved brother of Adella Andrijeski, Glen Geilenkirchen, Dean Geilenkirchen, and is also survived by numerous nieces and nephews. He was preceded in death by his parents Gerhard and Clara Geilenkirchen, his sister Loraine Glass, three nephews and a niece.

Father Jude attended St. Joseph’s School in Fort Collins the first nine grades, then went to Fort Collins High School, graduating May 1956. During his young years he was active in 4-H and FFA programs, showing animals at the county and state fairs. In his senior year in high school he entered the cherry pie baking contest and ended up as one of the nine finalists who showed how to make their pie in front of an audience.

Father Jude served as Brother Jude in the Benedictine Fathers at the Holy Cross Abbey in Conon City. This is where he acquired the name of Jude. Still longing to be a priest, he went to Canada to a seminary for the required studies.

He was ordained a priest for the Archdiocese of Denver by Archbishop James V. Casey on May 26, 1973 and served as Pastor at various parishes over the years, including: Our Lady of the Valley, Windsor; St. Augustine, Brighton; and St. Mary, Brush. And as Parochial Vicar at Immaculate Heart of Mary, Northglenn; Christ the King, Denver; Mother of God, Denver; St. Theresa, Aurora; St. John the Evangelist, Loveland; St. Mary, Breckenridge; Our Lady of Peace, Silverthorne; St. Anne, Granby; St. Claire of Assisi, Edwards. He also served as a missionary in Columbia. While there he worked building shelters for the poor families and a church from donations from his friends and relatives in the United States.

Father Jude’s funeral Mass was held Tuesday, Jan. 11 at the Cathedral Basilica of the Immaculate Conception in Denver. Father Jude was interred at Mount Olivet Cemetery in Wheat Ridge, Colorado.