His Church. Our Experience.
Subscribe
HomeLocalFather Jan Mucha remembered for his ‘joy and simplicity’
Local

Father Jan Mucha remembered for his ‘joy and simplicity’ 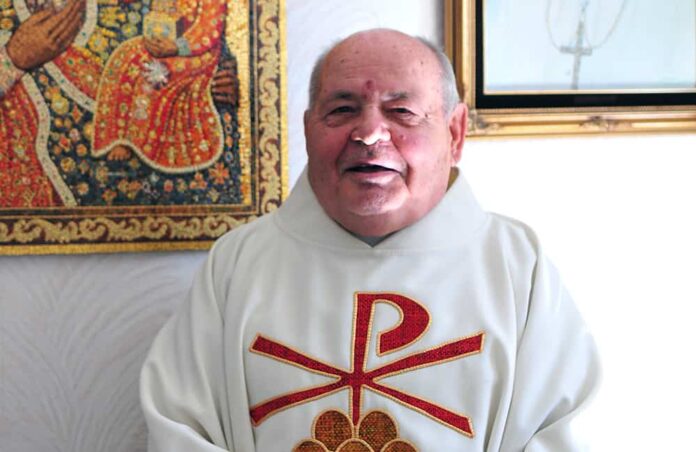 When Father Marek Ciesla was 11 years old, he encountered a priest in his hometown in northern Poland who was visiting his parish on mission.

“I was impressed,” said Father Ciesla. “A couple of my friends and I were talking about how energetic, how wonderful this priest was. I think in this way he inspired us a little bit to follow the call to the priesthood.”

The priest was Father Jan Mucha, and little did Father Ciesla know that decades later and an ocean away, he would reunite with the man that inspired him and his friend to pursue the priesthood.

In 2010 when Father Mucha was retiring from his role as pastor of St. Joseph Polish Catholic Church in Denver, Father Ciesla was sent from Poland to the Archdiocese of Denver to take his place.

The priests spent two days together, and Father Ciesla was struck by the familiarity of Father Mucha.

“For some reason, the way he was talking and the words he was using, something rang a bell,” he said. “I asked him if he remembers visiting my parish. And he said, ‘Oh, yeah, I had it on my list. I remember.’”

Father Ciesla was amazed that the man he was there to replace was the same one who had impacted his life all those years ago.

“God works in mysterious ways,” said Father Ciesla. “I never thought I would meet him again.”

Father Mucha passed away March 21 after serving the archdiocese for 40 years. He was 88 years old.

Father Mucha was born March 16, 1930 in Gron, Poland to parents Kazimierz and Aniela Mucha. He was one of five children. Father Mucha attended high school in Kraków and went on to study philosophy and theology at a seminary in Tarnów.

Father Mucha was ordained December 19, 1954 in Tarnów by Auxiliary Bishop Karol Pękala. He served at St. Theresa Parish in Lublin, Sacred Heart Parish in Florynka and as a Latin teacher at Sacred Heart Novice House in Mszana Dolna.

He was incardinated into the Archdiocese of Denver on April 20, 1978. Before he was granted retirement status in August of 2010, he served at St. Joseph Polish for nearly 40 years.

“Father Mucha was dedicated to his people and there was a joy about him,” said Msgr. Bernard Schmitz, who had known Father Mucha since his own ordination in 1974 and more recently within his former role as Vicar for Clergy.

“I admired his joy and simplicity,” said Msgr. Schmitz. “He seemed to have no guile and what you saw is what you got. He was very proud of his Polish heritage and was unafraid to be Polish.”

Father Mucha’s move to the United States came about after he visited St. Joseph Polish while on vacation. The pastor at the time was sick, and parishioners asked Father Mucha to stay.

After receiving approval from his superiors in Poland and the archbishop in Denver, Father Mucha did stay, and ended up serving the parish for nearly four decades.

“He was happy to serve here,” said Father Ciesla. “All the time, he was a man of faith. He kept his eye on Jesus.”

Msgr. Schmitz believes Father Mucha’s faithfulness and tenacity as a priest will leave a lasting impression on those he served.

“He was dedicated to the priesthood and didn’t want to retire until he was sure his people would be well taken care of,” said Msgr. Schmitz. “He could come across as tough, but really he was a compassionate person [with] a heart open to the Lord’s work.”