His Church. Our Experience.
Subscribe
HomeLocalFather Cuneo remembered as a man of great humility who virtuously ‘wore...
LocalObituaries 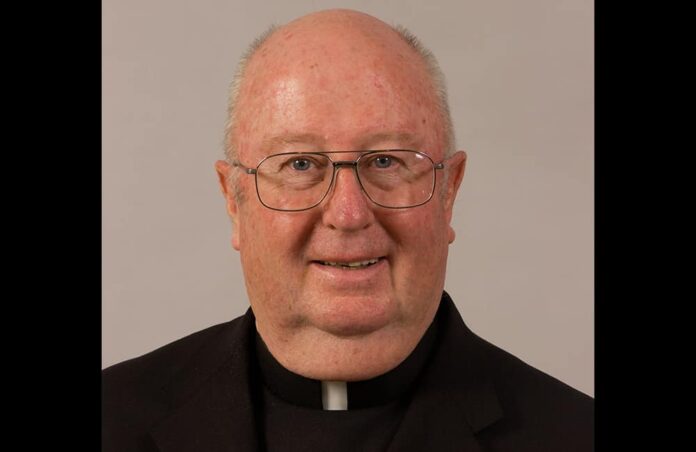 As parish priest, military chaplain and teacher — these were the three ways in which Father James J. Cuneo served the Church during his 55 years of priesthood, leaving a legacy of humble and sacrificial love to God, family, country and everyone he encountered. He passed away April 1 at the age of 82.

“Father Jim was a devoted priest and servant of the Lord.  He truly loved his vocation.  He enjoyed life and was humbly proud of what he was able to do and accomplish through the grace of God,” said Bob Cuneo, his younger brother. “He strived to use the time, talents, and treasures that the Lord gave him for the benefit of others. He wanted others to enjoy life the way he did.”

Father Cuneo was born on April 18, 1937 in Denver. He graduated from Holy Family High School in 1955, and subsequently entered St. Thomas Seminary in Denver. He was ordained to the priesthood on May 25, 1963, at the Cathedral Basilica of the Immaculate Conception in Denver by Bishop David M. Maloney.

After serving as assistant pastor and high school teacher at several parishes including Holy Ghost in Denver, Holy Cross in Thornton and St. Mary’s in Colorado Springs, an experience would kindle in him the desire to serve soldiers and their families.

“Two of my students were killed and several wounded in the Vietnam War. That started me to thinking about the spiritual needs of these young people facing injury and death far from home,” Father Cuneo told the Denver Catholic in an article published Aug. 22, 2007.

He received permission from the archdiocese to join the Air Force for a span of 20 years, during which he served in Korea, Germany and Turkey during the Gulf War; and even as the only priest in Thule, Greenland. He also served as chaplain at Edwards Airforce Base in California and the Lowry Air Force Base in Denver. He attained the rank of lieutenant colonel.

Upon his return to the Archdiocese of Denver, he served as pastor of St. William Parish in Ft. Lupton and St. Stephen Parish in Glenwood Springs; and as parochial vicar at St. Therese Parish in Aurora, Spirit of Christ Parish in Arvada and St. Joan of Arc Parish in Arvada.

Bob believes his brother’s legacy includes his strong love for God, his deep love for his family, his patriotic love for his country and soldiers, and his love and compassion for people. All these things he did with a combination of seriousness, humor and humility.

“Father Jim had two sides that blended well together,” Bob said. “He had the serious side of him, in which he wanted to be a priest and a chaplain, and help people in whatever struggles of life they had … But then he had the fun side of him, where he loved to tell jokes and play pranks … I think that’s what made him a complete person. He loved his life so much that he wanted others to enjoy life the way he did.”

“For a [person] who had every reason to talk about himself, he would normally just talk about the way in which he was able to serve… He was grateful for what he had received instead of bragging about what he had done,” Father Goebel said. “So, to me it was a great reminder that a priest is a minister of service and not just one who just lives an exalted life… He will certainly be missed.”

“He wore three hats: He was a priest, a chaplain and a teacher. And I think he wore them effectively and successfully… And he didn’t do it out of glory for himself; he did it for the glory of God,” Bob concluded.