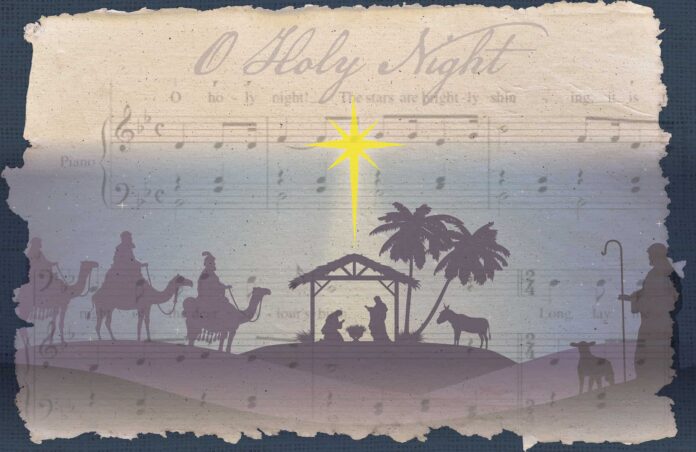 Celine Dion. Josh Groban. Mariah Carey. The list of musicians who have performed the classic and perhaps most powerful of the Christmas hymns, “O Holy Night,” is extensive. Go down the YouTube rabbit hole, and you’ll find there’s even a heavy metal version, not to mention countless other artists who have dared to take it on, to varying results.

The Christmas season cannot truly begin until the local radio station begins playing Christmas music across the airwaves (or, for you millennials and Generation Z-ers, until Spotify magically curates a Christmas playlist for you). More so than any other holiday, the music is inextricably linked to the season when it comes to Christmas. Vast coves of memories are tied to those tunes that we can’t get enough of come Black Friday (and are utterly sick of come Dec. 26).

And yet, certain songs transcend the inevitable “Christmas music burnout,” and “O Holy Night” is one of them.

It’s the kind of song that makes one stop dead in their tracks, especially when being performed by an exceptional vocalist. But what is it about “O Holy Night” that stirs our hearts so? A look back at the history of the composition and its musical and lyrical characteristics can provide a glimpse into the power of this timeless piece and hopefully, a newfound appreciation for it.

Much like the Nativity itself, the genesis of “O Holy Night” centers around a rather ordinary occasion in a rather ordinary French town. In 1843, the organ at the local parish in the quaint town of Roquemaure had been recently renovated, and a local poet by the name of Placide Cappeau was asked at the behest of the parish’s priest to write a poem to celebrate the occasion.

Originally called Cantique de Noël, the text in the original French was quite different than the familiar lyrics that are widely known today; it was also simply a poem. The opening lines, translated to literal English, read: Midnight, Christians, is the solemn hour When God as man descended unto us / To erase the stain of original sin / And to end the wrath of His Father. / The entire world thrills with hope / On this night that gives it a Saviour.

This rather didactic recitation of the poem changed in 1847 when the popular secular composer Adolphe Adam wrote the delicate yet incredibly moving melody that is now synonymous with “O Holy Night” and put it to the canticle. The newly-minted composition was premiered that same year in Roquemaure by Adam’s friend and local soprano Émily Laurey, who sang it at the Midnight Mass in the church of St. Jean-Baptiste et Jean l’Évangeliste.

Ironically, though intended as a very spiritual and pious piece at heart, the original text of the song drew a fair amount of influence from the secular culture of the time, which is understandable when one considers the political backdrop of France during that era of history.

“This was all happening and all being done within the shadow of the second French Revolution in 1848,” said Charles Nolan, Director of Sacred Music and Instructor at St. John Vianney Theological Seminary. “Viewing the text in that light, there are some interesting things that relate into that, particularly [when] looking at a translation of the French, it reflects very much on people’s pride. There’s definitely some interesting juxtapositions with the idea that the second French Revolution is brewing right around this this time.”

In the original French, one line of the canticle reads: It is to your pride that God preaches / Bow your heads before the Redeemer. Indeed, given the social tensions in years before the French Revolution, the song faced a colorful array of criticisms from across the ideological spectrum. Even so, the song continued to grow in popularity across France and Europe, which was not surprising, given Adam’s adept ear for writing popular music.

“Adolphe Adam was not a church musician, and in fact, his father was a composer as well and didn’t necessarily want his son to follow in his footsteps,” Nolen said. “But then he became a composer and music critic and he was mostly known for his ballets, and it may be one of the keys to its popularity, is the fact that Adam was writing popular music at the time. He was writing for public consumption of ballets. He was very intimately acquainted with what the public liked and wanted from music.”

As the song continued to grow in popularity around the world, it eventually caught the attention of a Unitarian minister by the name of John Sullivan Dwight in 1855. Dwight translated the poem into English using the lyrics we all now know and love, and the rest, as they say, is history. Thus, Cantique de Noël became more widely known as “O Holy Night.”

To this day, “O Holy Night” is sung at Christian churches of all denominations around the world and it remains a much-anticipated high point of the Christmas celebration. Its power lies not only within its elegant lyricism but also within the music of the piece itself. Nolen describes the main melody as one that continually rises and falls, imitating Christ’s descension to earth in the form of an innocent child; a simple act of divine power. These ideas are reflected in Adam’s composition.

“The apex of the piece is when we hear ‘O night,’ and it’s not just some other night, it’s the Night Divine and through the repetition as it’s moving down, [Adam] is painting that idea of the Night Divine when Christ was born,” Nolen explained. “And again, that idea, the melody starts high on ‘night’ and then as we get to the birth of Christ, the melody comes down. It’s this this continual motion of reminding ourselves, if you will, of God’s condescension to us in human form.”

Christmas presents an opportunity each year to truly reflect upon what is most important in people’s lives. Family, friends, food and gifts are all joyful and important parts of the season, but it bespeaks something deeper that an explicitly Christian holiday is such a stronghold of the world’s cultural celebrations.  What Jesus brought on Christmas transcends words, but “O Holy Night,” in its beauty, puts to music what words cannot do justice.

“Looking at the text, I think about how much we want as human beings what’s in this text. We want his love. We want his gospel of peace. We want all oppression to cease,” Nolen said.

The words and music of “O Holy Night” serve as poignant a reminder not only of the ultimate source of true, unbridled love, joy, hope and peace, but also of humanity’s universal longing for it. This is where the power and significance of “O Holy Night” ultimately lies.

“In a certain sense, in the humanity of the people who composed the poem, composed the music, composed the English translation, there is a longing that we as human beings have that is being expressed in this text,”  Nolen concluded. “Think about when our churches are most filled. It really speaks in a universal sense to what we’re all longing for, whether we know it or not, I think that’s part of what the popularity of it is, that in 1847, in 1947, and I’ll say in 2047, the words are still going to have a personal meaning to people.”